Heritage
The #1 strain of Hollywood celebs and stars.
Kyle Kushman Says:
An energetic and creative high that flushes out negativity and fills you with a fresh and positive buzz.
Check the Germination Guide by Kyle Kushman
Strain description
OG Kush is arguably one of the most popular strains in the world, but getting hold of it can be a challenge as it regularly sells out in dispensaries. Thankfully, Homegrown Cannabis Co. can provide feminized seeds to those looking to grow it for personal use. OG Kush is a mostly Indica strain that owes its worldwide success to

OG Kush is arguably one of the most popular strains in the world, but getting hold of it can be a challenge as it regularly sells out in dispensaries. Thankfully, Homegrown Cannabis Co. can provide feminized seeds to those looking to grow it for personal use.

OG Kush is a mostly Indica strain that owes its worldwide success to its fantastic genes. It has a strong diesel aroma courtesy of Chem Dog (sometimes known as Chemdawg), whereas the other parent remains a mystery. A theory that many breeders have accepted is that the 'secret ingredient' is actually a mix of two strains prized for their individual traits. These are Lemon Thai, a Sativa dominant herb with strong citric scent, and Old-World Paki Kush, an indigenous strain from Pakistan. Both, incidentally, are extremely potent.

Hoping to pass all these great traits on to a new hybrid, the breeder lumped them together in a ménage à trois resulting in what we now know as the Original Gangsta OG Kush. With its intense cerebral effects, this Ocean Grown herb carries users through a stimulating mental high. But even better than that – it also has a delicious flavor and an energizing fragrance.

Smokers regard OG Kush as one of the top cannabis strains in the world. It's quite a sensitive plant, though, and growing it successfully can be tricky. It can be prone to disease and powdery mildew and susceptible to attacks from bugs and pests.

Even so, it remains a popular strain among cannabis growers, who believe any effort is worth the amazing, psychedelic high. It flowers quickly and produces heavy trichome-coated buds whether grown indoors or outdoors.

OG Kush has an Indica structure and remains quite short with numerous lateral branches.

It's best grown indoors in a controlled environment away from pests and other threats. It has a flowering time of 8 to 9 weeks, and gardeners using Homegrown Cannabis Co.'s feminized seeds can expect up to 1.63 ounces per square foot.

If working outdoors is preferred, flowering ends the first week of October. When planted in a hot, tropical climate, with no sudden changes in weather, each plant can produce up to 15.8 ounces.

OG Kush is the personification of the word 'delicious'. When sniffing it for the first time, users are immediately captivated by the refreshing aroma of pine and evergreen mixed with an earthy undertone. Light it up, and you'll notice a subtle but spicy scent.

With much of its fragrance carrying over to the flavor, it's a delight to smoke. It has a spicy, woody, lemon taste with a slight sourness that lingers after exhaling.

With recorded THC levels up to 27%, OG Kush hits intensely. Inducing a long-lasting euphoric high, it melts away any inhibitions in an instant. It's a mood enhancer that quickly puts users in good spirits, leaving them feeling altogether happier and more cheery.

Thanks to the great sense of wellbeing it induces, OG Kush is a brilliant stress reliever. Once the Indica traits kick in, it puts users in a trance of deep relaxation. The chances are high that most people will find themselves locked on the couch, even with moderate doses.

Before the effects completely wear off, most people end up feeling drowsy, and it's not at all unusual for smokers to nod off. The best time to use OG Kush is at the end of a tiring day when there is nothing else to do but to chill and rest.

While OG Kush delivers an exceptional relaxing high, it can also bring a few adverse reactions. The most common are dry eyes and cottonmouth, which are frequent side effects with many cannabis strains.

OG Kush is the joint of choice for users everywhere, and it's easy to see why. Besides being a wonderful smoke, it has parented other favorite strains like Pineapple Kush, Bubba Kush and Sour Diesel. With feminized seeds from Homegrown Cannabis Co., cultivating your own crop of OG Kush becomes an enjoyable experience. There's no need to worry about male plants causing trouble with the females.

These feminized OG Kush seeds have been carefully handpicked so that buyers can be assured of a good batch every time. Take care of them, and they will take care of you with their dense, resin-filled flowers and awesome high.

Since I will not plant till late March or April I can't comment on success.. Later for that. So far, it's been a pleasure doing business with you. Love. and Peace, Bill

CUSTOMER REVIEWS
OG Kush Feminized
4.83 (6 customer reviews)
reviews (6)
6 Reviews
Leave a Review
Sort By
SORT BY
Date (Newest - Oldest)
Date (Oldest - Newest)
Rating (Low - High)
Rating (High - Low)
Thank you for posting a review!
Your review will appear on the site as soon as we value it.
J
John F. Verified Buyer
5 (1 customer reviews)
Seeds look great! Didn't start
Seeds look great! Didn't start them yet. I'm growing mixed seeds that I had saved.
Was this review helpful?
0 0
j
jason d. Verified Buyer
4 (1 customer reviews)
I germinated 3 seeds and
I germinated 3 seeds and all three popped, one of them has some fat leaves on it , is that the genetics? 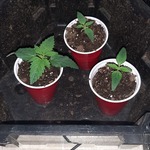