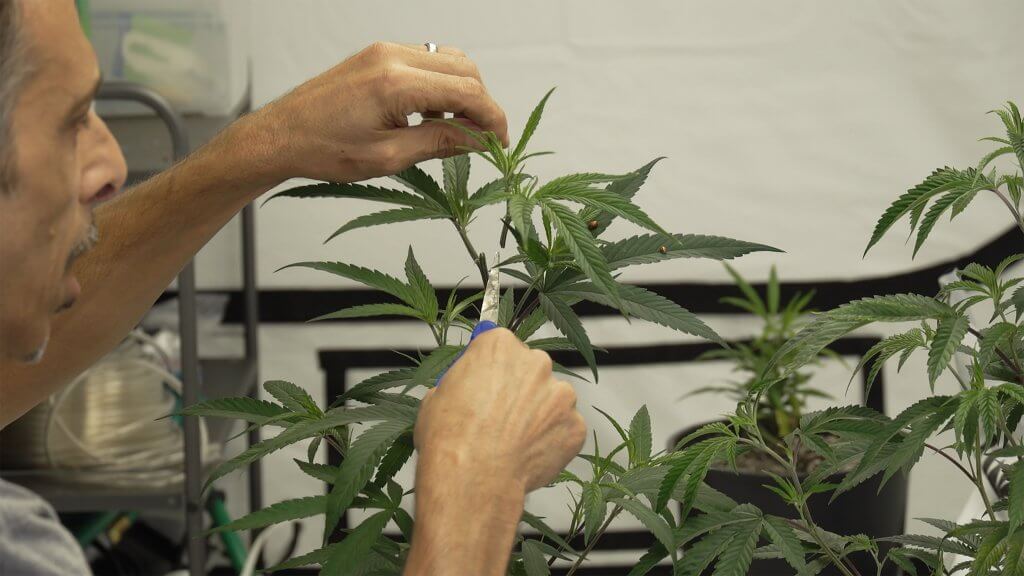 Topping vs. fimming is a contentious high-stress training (HST) battle where both are winners. These advanced training techniques reduce the height of your main colas and allow the rest of the plant to catch up.

Although stunting the main growth point seems counterintuitive, it results in a more expansive and level canopy. You also get heavier yields due to comprehensive light coverage.

If you’re hoping to bolster your homegrown output, read on to find out about fimming vs. topping. We’ll show you how the experts prune their way to plump buds.

Topping vs. fimming: What is topping cannabis?

Topping is cutting off the head of the cannabis plant by slicing through the main stem during the vegetative stage.

While super cropping combines trimming techniques and lollipopping acts on the lower portions of the plants, topping and fimming address the summit.

Growth hormones are usually focused on the terminal cola. By lopping it off, they rush to the rest of the plant, energizing lateral branches.

Cutting off the head causes stress which stunts the top of the crop. It also allows the side branches to catch up. Stunting vertical growth is especially important in indoor grow rooms with limited space.

Under lights, plants push upwards towards the illumination source while the lateral branches sit in the shade. The hormone boost also improves side growth, widening the area the illumination reaches.

Topping cannabis plants also results in two main colas forming where there used to be one. Commercial growers repeat the process, making four, eight, and so on. This method takes full advantage of available light and boosts output significantly.

Topping aims to invert the Christmas tree shape of the marijuana plant. It produces bigger harvests with thicker colas, each getting a decent share of the light. It also reduces crops’ energy to create smaller “larfy” buds.

Fim vs. top: What is fimming cannabis?

Topping and fimming are similar HST methods for improved cannabis growth and bud production. Fimming cuts 75% of new growth at the top of the main stem, but the incision doesn’t slice the central stalk.

FIM is an acronym for “F***, I Missed” and refers to omitting the main stem. The snip results in four new heads growing from the same spot and stresses the plant less than topping. Less pressure means it also recovers more rapidly.

This method creates four heads each time, but plants still grow tall compared to topped ones. About five days of recovery are needed before regular growth resumes. Like topping, fimming allows cultivators to maintain a balanced canopy.

Fimming removes most of the new growth without touching the stem of your plant.

In nature, plants grow toward the sun. As it moves across the sky, it gives crops complete access to its rays. Indoors, plants develop in the direction of the stationary lights, so the top bud (apical cola) gets the lion’s share.

The difference between fimming vs. topping

Here’s a brief breakdown of the topping process:

Here’s an overview of the fimming technique:

While the difference between topping and fimming is only a few inches, both methods significantly impact output. It usually takes two weeks for plants to recover from topping, but only about five days from fimming.

Before settling the debate, you’ll need to buy and then grow your indoor seeds to at least a foot tall.

Is topping or fimming better?

Is topping or fimming better? See what works for your setup; you could try both methods side by side to highlight the differences, pros, and cons. Breeders successfully use these methods of pruning marijuana plants to elevate yields and boost bud quality.

Here are a few things to keep in mind when attempting these techniques:

Our topping and fimming guide should give you an idea of which HST pruning style might work best for you.

The lowdown on topping and fimming

Choosing to top or fim is like picking between two champion fighters in different weight classes. Fimming seems like the winner because four heads are better than two, but it’s typically more complicated. Cultivators can repeat the process multiple times to create even more colas.

It also depends on your grow space. Small and micro-operations usually implement fimming, while outdoor growers and commercial farmers opt for topping. Although both pruning methods restrict height, fimming results in taller plants.

Why not put your knowledge to work? Buy top-quality cannabis seeds, germinate them, and watch them grow to a foot tall. Then, it’s time for your own topping vs. fimming test.