Meet the Expert: Jeff the 420 Chef 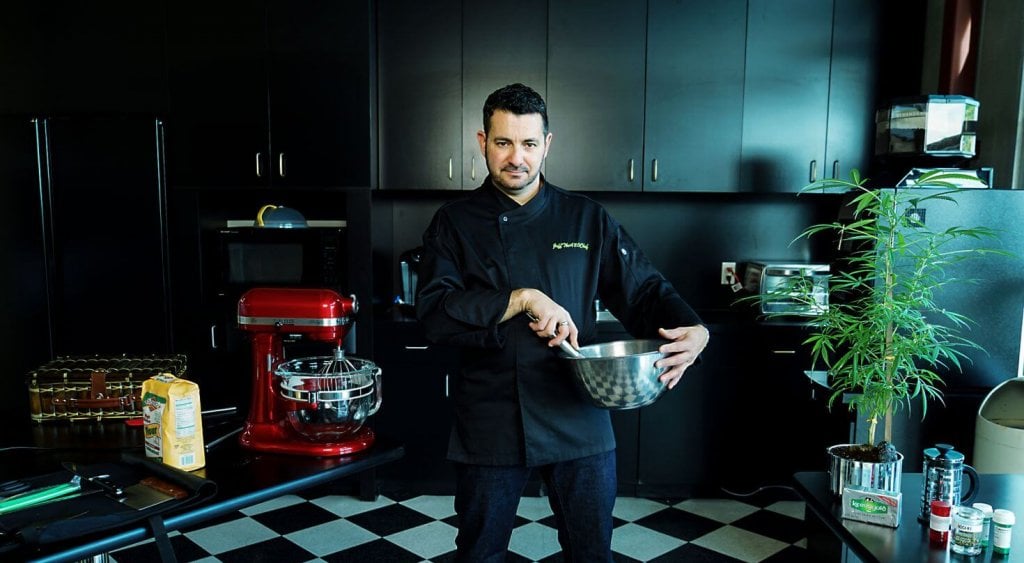 Are you a food buff who also enjoys edible cannabis? Perhaps you’re just looking for an alternative to consuming your marijuana? Well, you’ve come to the right place. Meet the author, Jeff the 420 chef.

Jeff doesn’t just specialize in culinary magic; he invented cannabis gastronomy. No one else in the world pursues cooking with uniquely crafted cannabutter or canna-oil like Jeff the 420 chef.

Let’s look closer at this wizard of marijuana cuisine.

What started as a kind deed resulted in a new revolutionary way of consuming cannabis. In 2012 Jeff Danzer, aka “Jeff the 420 chef,” decided to come to the aid of his mother’s friend by baking her a batch of weed-infused brownies.

His mom’s friend had cancer, and although she had a medical marijuana prescription, she couldn’t smoke it. At the time, dispensaries weren’t selling any edibles or other forms of cannabis.

His brownies, however, had a harsh grassy taste which was nothing like the delicious “virgin” ones he would come to master. Jeff, the chef, then set out to investigate how he could eliminate this unpleasant plant taste. This journey of discovery was the unveiling of “Jeff the 420 chef.”

His claim to fame

Jeff’s amazing discovery transformed people’s perception of cannabis consumption. After more than a year of researching and exploring, Jeff the 420 chef identified a process of “cleaning” cannabis by removing the herbaceous taste.

He subsequently used this method and started creating Jeff the 420 chef cannabutter and canna-oil. He tested a range of strains enriched with THC and CBD, removed any negative taste and odor, and added them to various dishes.

Jeff the 420 chef, a self-taught cook, emerged. He offered his services to those interested in home-cooked cannabis-infused meals. In addition, he took on the role of a private chef by visiting individual’s homes in states where marijuana is legal.

His catering at private events involved a variety of dishes and special items, even wedding cakes (we know a good strain for that). He mastered Jeff the 420 chef gummies in delicious, rainbow colors too.

One of Jeff the 420 chef’s methods he applies to his cooking is “layered micro-dosing,” where he controls the dosage in each dish to avoid anyone becoming sick, anxious, or paranoid from too much THC.

Jeff quickly became widely known for his delicious cooking while keeping his clients’ wellness and health in mind, even sharing his recipes with them. His mission; “To make cooking with cannabis simple and easy.”

Not just another chef

Nothing expresses benevolence more than sharing your ideas with others, and this is what Jeff the 420 chef did. He generously shared his recipes in his cookbook, “The 420 Gourmet: The Art of Elevated Cannabis Cuisine.”

Besides offering his cooking services at private dinner parties for marijuana patients or recreational consumers, he ensures that every dish and serving has the appropriate dose of THC and CBD.

Measuring these doses can be quite tricky, especially if you’re a novice. However, Jeff managed to master this art and innovatively came up with “Jeff the 420 chef calculator.” This THC/CBD calculator can be found online and assists home chefs in getting the right amount of THC per serving.

If you follow Jeff the 420 chef’s method for making cannabis-infused butter and oil, you’ll be able to determine the mg of THC per serving. However, the result is dependent on the percentage of THC, CBD, and the strain used.

An edible bought at a dispensary might not contain the exact dosage you require or be as flavorful as you’ve hoped. With Jeff the 420 chef cookbook and his calculator, you can create a meal or snack according to your specific needs and taste.

Inspiring others through teaching

Jeff is executive chef at Monica’s House, a lounge in West Hollywood that serves cannabis edibles. In addition, he provides culinary tuition in the states where medical and recreational use is legal. The series of classes is called; “The Art of Cooking with Cannabis.”

His teaching involves imparting Jeff the 420 chef’s recipes and educating the participants on the importance and distinctions between THC and CBD. Those who attend the classes range between medical marijuana patients, their caregivers, and even recreational users.

By doing this, he helps them learn how to manage the potency when making Jeff the 420 chef canna-oil and cannabutter—the basis of all recipes. He confesses that “I love what I do, enjoy meeting interesting people, sharing my recipes and helping others.”

These classes also help attendees understand the notes and tones of the various strains. He would occasionally add the strain’s flavor, like a herbal essence, to make a dish tastier.

He believes that “cannabis is a gateway to a better quality of life for people.”

Jeff also hosts a podcast, “Wake and Bake with Jeff the 420 chef.” Furthermore, his recipes are regularly featured in high-profile publications such as the High Times, Culture Magazine, MerryJane, Cheddar TV, and more.

Jeff the 420 chef’s success and his unique niche in this thriving cannabis market resulted in him being described as:

Jeff intends to broaden his horizons by hosting a TV show and presenting his series of cooking classes online. In addition, he hopes to partner with dispensaries where he can teach these courses as well.

We’re excited to see what else Jeff the 420 chef has in store and to learn more of what he has to offer. From his fabulous recipes to tips on cooking with the correct dosage and various strains.

It promises to be both insightful and inspiring for novices and experienced cultivators alike. To quote Jeff the 420 chef, “It’s one thing to do it, it’s another thing to do it right!”

« First Signs Of The Flowering Stage: How To Recognize Budding Cannabis
7 Blue Weed Strains You Must Know and Grow »