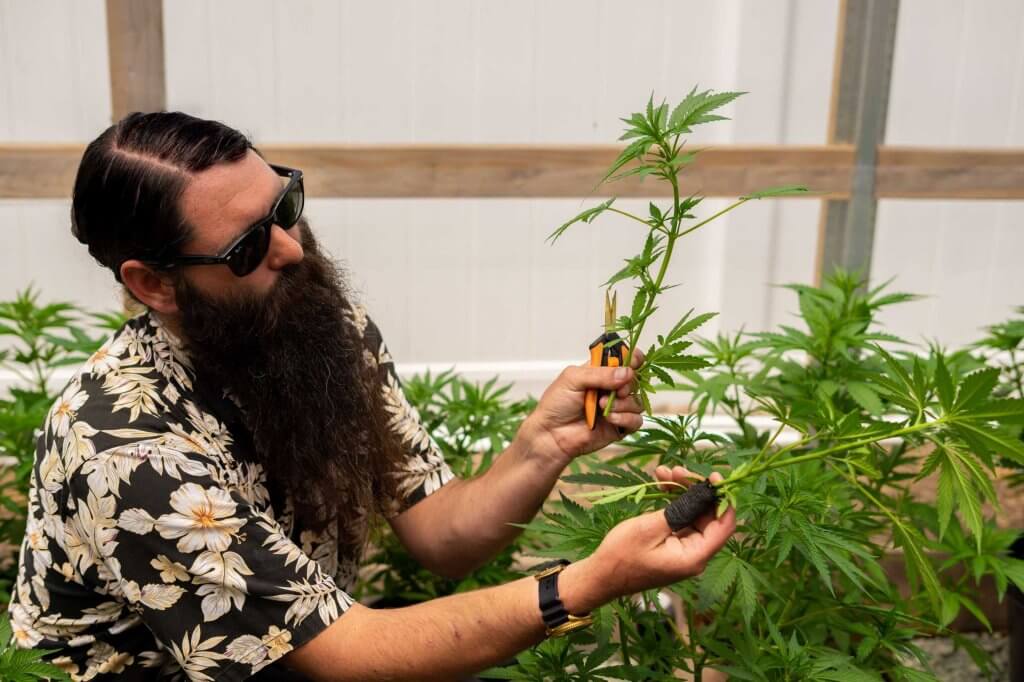 Parker and the early years

They say hindsight is always 20:20, it’s more accurate to say we’re better able to frame events once they have passed, fine detail into big picture, trees into woods.

The Parker of 20 years ago would gasp at where he is today: managing a cannabis garden, growing his own medicine, sharing his skills with the world.

His road certainly wasn’t straight, and he’s had more than his share of emotional bumps. Parker Curtis has worked super-hard, developing a calm, methodical mindset evident in the way he speaks and conducts himself. Evident in the quality of his cannabis plants.

Parker Curtis: a career in cannabis

His interest in botany started as a child: small but already-green fingers, watching and learning from his grandmother in the garden. Learning how to read plants, how to respond, how to keep them happy.

His later career choices lead him to medicine, working in emergency care, pharmaceuticals, and therapeutics, but he never lost his interest in gardening. His small, indoor grows helped him unwind from a mentally and physically demanding work life.

As time went on, his career, hobbies, and interests began to merge and evolve. Gardening and medicine morphed into growing medicine. Not least because of the difficult times he was living through.

He witnessed the damage that prescription drugs can cause, especially opioids, and he set out to understand cannabinoids, their relative medicinal benefits, and different extraction methods.

Soon after, Parker’s father was diagnosed with throat cancer.

To help support the conventional cancer treatments, Parker and his mother rallied to find alternative treatment methods. With an abundance of homegrown marijuana on hand, they created a regimen of Rick Simpson Oil (RSO), a whole plant extract he’d read about.

Although it helped with many symptoms, Parker’s father eventually lost his battle to cancer.

Though tragic, Parker reflects on this chapter in his life positively, especially the fact his parents saw cannabis in a different light, sharing his belief in the medicinal potential of cannabis.

Parker’s mother continued creating extracts and started an edibles company specializing in baked goods. Together, they provided access to and taught others about extracting cannabinoids for a variety of purposes.

Parker and the Homegrown Cannabis Co.

Parker eventually left the traditional world of medicine. He knew he preferred gardens to emergency rooms, greenhouses to trauma wards. His focus shifted 100% to cannabis cultivation and extraction, driven by a desire to learn, share and grow.

This journey led him to the Homegrown Garden, a garden he built with his bare hands. It is his arena, his stage, his podium.

He shares his time between amazing plants, creating educational videos and rapping with Kyle Kushman and Nate Hammer on Growing Live. And he’s always, always growing.

Parker has around a decade of cannabis-growing experience, specializing in soil-less and hydro grows. The Homegrown Garden has compelled him to expand his knowledge base, to overcome unique challenges, to learn something new every day – just like our customers!

He’s mastering outdoor, greenhouse, and indoor grows. He’s adopting new techniques, he’s assimilating all he can from Kyle and he’s learning how to teach. And he’s doing it all BRILLIANTLY.

Like anyone starting a journal in Homegrown Diaries, Parker recognizes that every growing season brings unique successes and failures. The key is to use the data well, learn the lessons, and never stop growing.

As Parker himself explains, “don’t overthink it, keep it simple, and just go for it!“