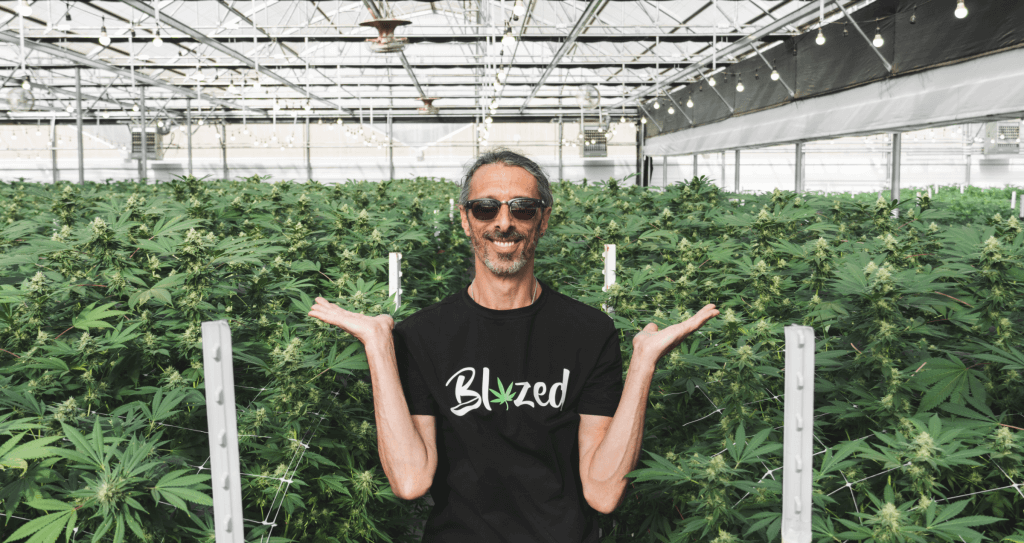 “People should look to Kyle Kushman for growing advice because he’s been doing it just about longer than anybody else around, and he’s been doing it at a very high level of accomplishment. He’s been thinking it through and he’s taken the lessons cannabis teaches us.” – Steve DeAngelo

When assembling a squad of legends, a team of 24-Carat OGs, it’s important to have a figurehead, a chief, a Captain America.

This is OUR Kyle Kushman

Kyle’s collaborations earned 13 Cannabis Cups, 3 for Best Flower. He was the first to develop a wholly vegan range of nutrients and his super cropping techniques changed the way people tend to their plants and maximize yields.

He’s been teaching and spreading the word for over 30 years, maintaining a consistently high level of achievement throughout his entire career.

Searching for a master breeder and indoor growing expert to collaborate with us, Kyle’s was the first, the last, and every name on our list. We are delighted, honored, and extremely happy to have him spearhead our team.

But why Kyle? Why Homegrown? And why now?

Kyle’s journey began long before Homegrown, long before an international cannabis industry and long before legalization. It began in New York City.

A long time ago, in a grow room far, far away…

Kyle’s journey with cannabis began in typical fashion: with Monty Python, Doritos, and Slim Jims. He grew his first plants in a closet with some very rudimentary equipment, but the buds he grew, as he tells it ‘were the size of soda cans.’ And they smelled AMAZING.

Kyle had discovered a talent.

He started selling to the staff at High Times Magazine, quickly progressing from their local ‘supplier’ to their fully-fledged Cultivation Expert. An actual, paid-for, legal job! He wrote for High Times, in one capacity or another, for the next 20 years.

In 2004, Kyle left New York and headed to California, to enjoy the freedom to cultivate without fear of prosecution.

It was the start of something very, very special.

Kyle Kushman is the nom de guerre of Adam Orenstein. The name Kyle Kushman emerged when he first got involved with High Times. ‘They were calling me The Kushman at the time because I was peddling Purple Kush. I thought Kushman kinda sounded like a Jewish Orthopedic, and Kyle Kushman just rolled off the tongue.’

He’s a modern-day polymath of pot: cultivator, breeder, activist, writer, and educator. With three decades of experience, he’s tried all of the growing methods, nutrients, and equipment imaginable. In fact, he was the first to develop a vegan range of nutrients, Vegamatrix, derived only from non-GMO plants, never from animals.

Vegamatrix is famous for being completely free of the destructive heavy metals found in most other nutes (even organic nutes).

Organic farms that use animal-derived fertilizers run the risk of passing harmful chemicals to the environment and to humans. By eliminating animals as a source, Kyle eradicated the danger of pathogens like salmonella and e-coli, as well as toxic chemicals and heavy metals.

The quality of his nutrient line is evident in the success of his award-winning strains and collaborations. No less than thirteen of the medicinal and therapeutic strains he developed went on to win Cannabis Cups.

For growing the cleanest, purest cannabis, no method comes close to Kushman’s system. His holistic approach marries healthy ecosystems to thriving plants, the needs of individual cells to the needs of the garden, the microscopic and macroscopic simultaneously.

Not only did he become the driving force behind Vegamatrix, he also pioneered an amazing array of advanced horticultural techniques specific to the cannabis plant, known as super cropping a.k.a Kushman Chiropractic.

These techniques include dramatic node and branch pruning, stripping away all but the last three nodes on each branch to enhance growth. They’re also famous for bending and breaking – a wholly counterintuitive method of strengthening and maximizing the efficiency of the plant.

They’re not all easy skills to learn, but you couldn’t ask for a better coach.

Kyle has taught advanced horticultural and Veganic courses at Oaksterdam University in California, and across the United States. He’s appeared in numerous radio shows, podcasts, television shows and documentaries, such as the amazing Explained on Netflix, directed by Kevin Smith.

He’s a leading voice in the fight for legalisation and education, especially when it comes to growing cannabis at home. As an advocate of the medical (and recreational) use of cannabis and earth-friendly, veganic growing, Kushman continues to contribute significantly to the movement.

Today, Kyle remains a key figure in the cannabis community. His desire to help people become better home-growers has led directly to the development of the How to Grow Marijuana Indoors – A Beginner’s Guide, a series of videos created specifically for beginner growers.

His remarkable levels of innovation, both in and out of the grow room, made him the perfect fit for the Homegrown Cannabis Co.

Kyle continues to push cannabis cultivation into exciting new areas, by guiding beginners with his videos and teaching growing techniques like Sea of Green (SOG) and Screen of Green (SCROG) – but nothing has made us more excited than the launch of his Homegrown cultivars.

Described by Kyle as ‘amazing from start to finish’, Sweet Island Feminized is an incredible cultivar in terms of its aroma, flavor and effect. Consumers should expect tangy bursts of grapefruit, juicy pineapple and a tropical, sweet smell that delights the senses.

Sweet Island is almost as much fun as Kyle himself, and has serious potential when it comes to relieving tension, stress and lighting smiles all over the world.

With a plethora of delicious flavors, Cherry AK Feminized is enough to entice any and all consumers. Cherry AK fills the grow room with the scent of sweet, caramelized cherries, taking on lemon, blueberry and sharp spice in the bowl.

And the high? Wow! What can we say? Surely, Cherry AK sparks creativity like no other, a real firecracker, perfect for writers and artists. In other words, clear your calendar, bake some snacks and prepare to get in the zone.

Capping off Kyle’s Cultivars with Character is Skywalker OG Feminized, a heavy indica with pungent, chemmy aromas. These tantalizing smells deepen in the bowl, developing thick notes of honeyed spice and spun sugar.

The long-lasting high invariably ends in couch-lock (it starts there, sometimes) but always with a euphoria stretching far beyond the cut off point of sleep.