Marijuana Lookalikes: 13 Plants That Look Like Weed But Aren’t 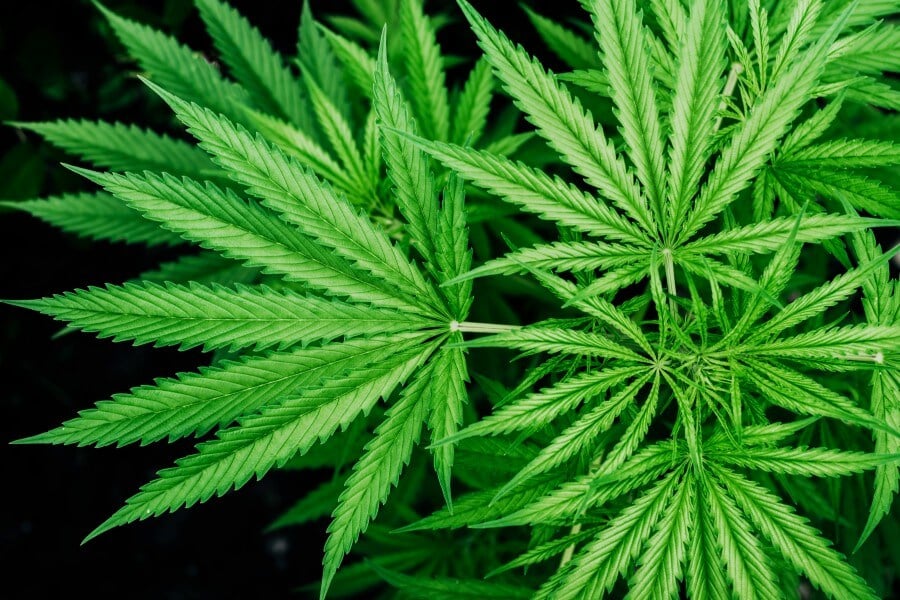 Plants that look like weed could get you into trouble, especially with nosy neighbors.  There are tons of plants that resemble marijuana, and knowing the difference can save you a lot of misery. Plus, it’s fun to learn about them and share the deets with your neighbors before they call the cops on your tomato plant.

Are you keen to discover thirteen plants that look like pot? Let’s go! We’ve done the research, and we’re ready to reveal all.

Why is it important to know the difference between plants that look like marijuana and the actual plant?

It’s interesting to see how many plants have a similar appearance to cannabis. Apart from that, there are more important reasons to learn the difference. Here are some reasons why it’s crucial to be able to identify plants that look like marijuana:

You don’t want the police to come knocking on your door for your herb garden. If you live in a strict neighborhood, you can plant herbs that look like weed away from prying eyes.

The rise of fake cannabis seeds is scary. Only trained eyes can spot the difference between cannabis and other plant seeds. Once you grow a plant that looks like weed, it can be lethal if you end up smoking it. To avoid this, ensure you learn the difference and buy cannabis seeds from a reputable seller.

Every cloud has a silver lining. Most reasons to know the difference between a weed plant and a marijuana look-alike are to avoid negative consequences. Here’s a positive one:

Some pot enthusiasts collect everything from marijuana-themed t-shirts, mugs, and car stickers. Why not bring your passion home and grow a ganja-themed garden filled with plants that look like weed? You could even have a high-tea party with your cannabis-loving friends.

Now that you know why it’s essential to know the difference let’s look at 13 plants that look like marijuana. These descriptions will help you spot the difference and be prepared to explain your garden vs. “what does weed look like?” to your nosy neighbors.

These delicate plants are commonly confused for cannabis plants, especially during spring when the leaves are still green. It has arguably the most prominent marijuana leaf look-alikes. The blades grow narrow at the ends and have the same five-edged classic weed leaf appearance.

The most significant difference is that the Japanese Maple foliage turns bright red during the summer. It is one of the plants that look like weed, but it lacks common attributes such as the benefits and challenges of growing cannabis. Here are some reasons people grow Japanese Maple:

The Texas Star is one of the plants that resemble marijuana that could deceive most people. This beauty has slender branches adorned in thin, pointy leaves, all hanging from an erect, textured stem. Of course, cannabis growers wouldn’t draw conclusions simply on the leaf shape.

It has leaves that look like weed, but once it flowers, it can’t be confused. Texas Star lives up to its name when it begins to blossom with stunning red flowers in the shape of a star. People typically plant these flowers to beautify a space and attract stunning creatures like butterflies and hummingbirds.

The Chaste Tree looks like a weed plant that had a spa day. It has a similar leaf pattern, but the blades are smooth and soft. The structure makes it one of the plants that look like weed. You’ll see a few pointy green leaves bunched up in each stem; all joined on a sturdy trunk.

Of course, when the tree is fully grown, it’s clear to see it’s not a weed plant because of the brown trunks and lilac flowers that bloom in late Spring. Also known as Vitex agnus-castus, this tree has a lot of health benefits, specifically for women. It’s said to help regulate menstruation, rebalance hormones and boost fertility.

Cassava is a plant that looks like weed at first glance, but if you look closely, you should spot the difference. Each branch connects seven yellowish-green leaves. These are typically the only reason people confuse it for weed since it has red branches and fleshy roots.

The roots, also known as the ‘tubers,’ are highly poisonous but edible once appropriately cooked. They’re enjoyed in famous dishes worldwide, such as Taiwanese boba tea, cassava pie in Bermuda, and yuka fries in South America. Eating cassava boasts a wide range of health benefits, including high vitamin C and good carbohydrates.

Cranberry hibiscus is marijuana’s beautiful cousin. When young, they’re one of the plants that look like weed but aren’t. The leaves look like cannabis with a red hue. Of course, this can still be confusing because pot isn’t always green. Genetics, anthocyanins, and certain strains like Predator Pink may create a stunning amber color as well.

As cranberry hibiscus grows, the leaves broaden and look like typical maple leaves. There are many reasons people risk funny looks from their neighbors when they grow these plants that look like weed. Here are some:

This marijuana look-alike shares the same star-like pattern, rough edge texture, and lines of cannabis leaves. It looks like marijuana but has a lot in common with hemp. Also known as Deccan hemp, it produces one of the strongest fibers on the planet.

When Kenaf blossoms, it has white and crimson flowers, which are impossible to be confused with cannabis. Here are some of its uses:

Also known as common wormwood, Mugwort plants grow tall with short upright branches. The leaves are a forest green color on the top and covered in silver wooly hairs at the bottom. This plant that looks like marijuana may appear with resin-covered buds that accompany strains like Gorilla Glue seeds to the untrained eye.

It’s an ancient belief that Mugwort is a lucky plant that brings good fortune, but if you’re not careful, it could get the police instead. More than just a marijuana look-alike, it also has similar medicinal benefits and a strong earthy scent. Here are some uses for Mugwort:

These delicious minty leaves will give you fresh breath to face your nosy neighbors with confidence when asking about your garden. Mint plants have dark green leaves bunched together in groups of four or five and stacked tightly on a long vine-like stem. Sound familiar?

Mints plants are herbs that look like weed, but you definitely shouldn’t smoke them. If you’d like minty fresh breath after smoking, try strains like Super Silver Haze Auto seeds which create buds with minty undertones.

This aromatic Italian herb commonly sprinkled on pizza could easily be mistaken for the herb you smoke instead. The hue is a lighter shade of green than cannabis plants, but it has leaves that look like weed. Slightly serrated edges and a similar bumpy texture could fool anyone.

If you want to keep your oregano plant a secret, you can grow this marijuana look-alike indoors by your kitchen window. In the culinary world, oregano is typically dried and ground (much like weed), and it has a potent earthy scent. It also boasts a wide array of health benefits such as:

A man from Cartersville was woken up by a chopper, county deputies, and a K-9 unit. They were from the Governor’s Task Force for drug suppression and later realized what they saw as a weed plantation was just a garden of okra.

Okra has marijuana leaf look-alikes and buds. That’s right, it has buds that look scarily akin to weed nuggets, but you don’t want to smoke these. Eating okra, however, has many benefits, including:

If it looks and smells like weed, then it must be weed…or it could be skunk cabbage. This is a well-known plant in America, so you won’t have to explain to your neighbors what is a marijuana plant and why these plants that look like marijuana will get you stoned.

Skunk Cabbage is usually grown in swampy areas and has a superpower of keeping pests away. Animals can’t eat this marijuana look-alike because it causes a burning sensation, but humans can eat it in moderate amounts.

The long, finely serrated leaves make tagetes minuta a plant that looks like weed, especially in the early stages. It’s also around the same size as most common cannabis crops. During later stages, it blossoms in yellow and white flowers, which cancels all confusion.

Similar to some cannabis strains such as Blue Dream, it releases an earthy licorice scent when rubbed. Some parts are edible such as the leaves and flowers but consume with caution because too much can cause toxicity. Here are some uses:

A worker at an apartment block once called the police because he spotted plants that look like weed on the roof. I know what you’re thinking, tomato plants look nothing like marijuana; it’s obvious. The police officer who came to analyze these suspicious salad leaves was also unsure.

That report was eventually closed. In another case, police raided a 79 years old woman’s cottage and arrested her dogs because they confused the tomato plants on her windowsill for weed. They also tore her house apart.

Honestly, tomato plants have one thing in common with cannabis: green leaves. If you do pot these plants that look like marijuana, let your neighbors know and maybe label your herb garden so the police won’t have to call on the help of a botanist (or arrest your dogs).

It’s surprising how many marijuana lookalikes are out there. By now, you should know what plant looks like weed and what doesn’t but could still get your door broken down.

In conclusion, tomatoes are dangerous. Just kidding! Hopefully, this helps you spot the difference and keep your lovely herb garden away from prying eyes. If you are growing weed, be sure to check out our top-notch collection and buy marijuana seeds from our seed bank.

« How to Get Rid of Weed Smell?
What Is Copper Deficiency In Cannabis? »