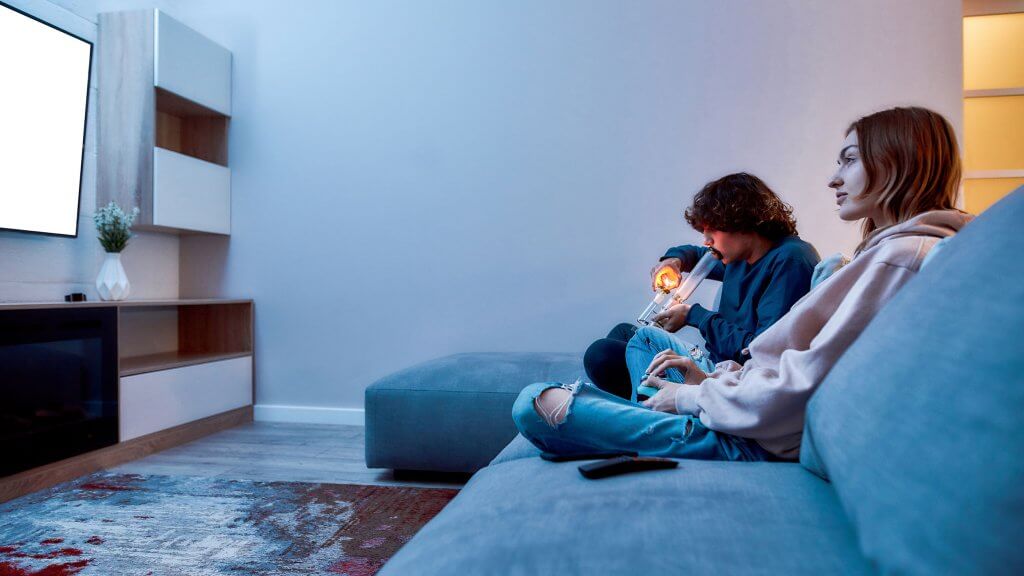 What do you do when the conversation starts to dry up, and everyone is winding down? You can call it a night and go to bed, or even better, choose one of our stoner movies to see you through to the end of the session.

From comedy to drama, documentary to absolute nonsense, the Homegrown Cannabis Co. 17 best movies to watch high list has something for everyone.

Relax and embrace the silence; now is the time to put on a movie and enjoy the ride.

Stoner movies provide us with the ideal entertainment after indulging in some herbal relief. Funny, quirky, or just downright weird, watching something entertaining is amazing when you’re high.

Looking for something to laugh at? Want something a bit more factual and interesting? This list covers a wide spectrum of entertainment for stoned people or stoner-related. So, check out our selection of the best stoner movies to watch when high.

No list of weed movies is complete without a film from these two legends. Choosing one is nearly impossible, so just start from the beginning and watch them all in a marathon until you pass out.

‘Up in Smoke’ is the duo’s first outing and follows the pair on their wild ride to try and score some weed. You probably guessed that’s not an easy mission and features many distractions and detours. The chemistry between Cheech & Chong makes this one of the best movies to watch while high.

Good to watch on a lazy day or later in the evening. There are nine movies in total, and generally, the earlier, the better.

Fear & Loathing follows Raoul Duke (Johnny Depp) and Dr. Gonzo (Benicio del Toro) on their misadventures as they search for the American dream in Las Vegas. Not strictly a stoner movie, it wins a spot on our list for the crazy story and the amazing cast.

The plot of Fear & Loathing can be quite hard to follow, but that gives it great rewatch value—the best movies to watch while high are ones you can watch multiple times.

“We had two bags of grass, seventy-five pellets of mescaline, five sheets of high-powered blotter acid, a salt shaker half-full of cocaine, and a whole multi-colored collection of uppers, downers, laughers, screamers.” Play a weed game of ‘count the cameos’ while watching for added fun.

Movies to watch when you’re high are often recommendations from friends (Homegrown Cannabis Co.), and trust us on this one.

Grandma’s Boy is the story of Alex, a game-tester who has to move in with his Grandma. Alex has to adjust to living with her, and the results are hilarious. For example, while Grandma is cleaning Alex’s room, she finds his ‘tea’ and decides to brew it up to share with her friends.

Need to know what to watch when high? Give Grandma’s Boy a try.

Come along with a group of California High Schoolers as they learn the important lessons; sex, drugs, and rock & roll. Sean Penn portrays Jeff Spicoli, a permanently stoned surfer dude who goes up against the school principal, who is under the impression everyone is constantly high.

Fast Times at Ridgemont High is another classic stoner movie.

Comedian Dave Chapelle is a pretty famous pothead, and he made his own stoner movie back in 1998. When Kenny accidentally kills a diabetic police horse with food he had for munchies and ends up in jail, his friends pull together to get him out.

Eccentric characters are one of the best parts of stoner comedy movies, and Half Baked has some great ones. An anti-pot love interest ironically named Mary Jane Potman and two competing dealers named Sir Smoke-a-lot and Sampson Simpson are great examples.

Super Troopers gives a glimpse into the life of Vermont State Troopers on patrol. These aren’t any old troopers, though; pranksters who love getting one over on the local police and messing with stoners.

You can’t talk about funny movies to watch high and not mention something from Broken Lizard. If you enjoy Super Troopers check out their other work; Slammin’ Salmon is another absolute classic.

High school and Junior high students all try to get drunk, get stoned, and get laid on the last day of school in May 1976. What makes Dazed and Confused one of the best weed movies is Matthew McConaughey as Wooderson, a character based on McConaughey’s real-life older brother.

The word ‘man’ is said 203 times during this movie, and the cover of the movie says ‘see it with a bud’—we’re talking about a real stoner classic.

Depending on where you are within the stages of being high, you want to choose a stoner movie that’s right for you. So far, we’ve focussed on funny stoner movies. If you’re looking for something more factual, ‘Super High Me’ is a documentary.

Following the success of Super Size Me, in which filmmaker Morgan Spurlock eats nothing but McDonald’s food for a month, Super High me tries it with cannabis. Join comedian Doug Benson as he goes on a two-month-long journey, first spending 30 days without marijuana and then 30 days with constant cannabis.

A great aspect of this stoner movie is that it’s from 2007, so you get to see a little bit of how things were with marijuana laws back then compared to now.

Director Kevin Smith’s first movie automatically qualifies as one of the best stoner movies, at least for gifting us with the stoner duo Jay & Silent Bob. This movie follows Dante, who works at a convenience store, and he’s not even supposed to be there today.

Watching these movies, you see a lot of the different stoner stereotypes portrayed. Clerks has such a wide selection of characters you’re bound to recognize one of your friends’ behaviors.

We get a quick look at Jay and Silent Bob here in this movie. Watch Smith’s effort at a stoner movie, ‘Jay and Silent Bob Strike Back’ to see them evolve into their superhero counterparts, Bluntman & Chronic, and fight Mark Hamill’s character. See the pair sharing the screen with Alan Rickman, Chris Rock, Ben Affleck, Matt Damon, Jason Lee, and many more in ‘Dogma.’

Looking for stoner movies and haven’t seen Friday? You’re excused to go and watch it right now. Craig (Ice Cube) has lost his job, and his friend Smokey offers to help with one of the best stoner movie lines ever; “I know you don’t smoke weed, I know this, but I’m gonna get you high today, ’cause it’s Friday; you ain’t got no job… and you ain’t got sh*t to do.”

Spend the whole of Friday with Smokey and Craig as they find themselves in a variety of amusing situations with a host of different characters from their neighborhood. Friday is the blueprint for many modern-day 420 movies, and if you enjoy it, there are two sequels well worth seeing.

From Tron to Iron Man, and from Seabiscuit to True Grit, Jeff Bridges is a Hollywood legend, appearing in over 60 titles. Did you know he stars in a stoner movie playing a dude who loves bowling, drinking White Russians, and smoking the good green herb?

The Big Lebowski follows ‘The Dude,’ played by Bridges, in a case of mistaken identity and a search for a missing wife. John Goodman and Steve Buscemi play the Dude’s best friends, and they are absolutely fantastic in this movie. Now you know what to watch when stoned; you can maybe try one of The Dude’s trademark White Russians to drink?

A staple of stoner comedy movies is a classic stoner duo. Harold and Kumar make an excellent duo, and their first outing is really worth a watch.

A typical stoner movie, the story revolves around the titular characters and features a lot of nonsense and some excellent cameos—our favorite is Neil Patrick Harris, who we find hitchhiking while high on ecstasy. If you enjoy ‘Whitecastle,’ there are two more Harold & Kumar movies to satisfy your appetite further.

From the same director as ‘Harold & Kumar go to Whitecastle,’ the 2000 stoner movie stars Ashton Kutcher and Seann William Scott as protagonists. After a wild party, the two dudes can’t locate their car, and finding it is not that easy.

The movie features some memorable moments, when they stumble into the cult of ‘Zoltan’ for example, or when the lady at the drive-thru restaurant keeps asking, “and then?”.

Seth Rogen stars as a process server, and James Franco is his dealer. After Dale (Rogen) witnesses Saul’s (Franco) supplier murder someone while trying to serve him papers, Dale and Saul end up on an off-the-wall adventure.

The Apatow gang is in top form in this classic stoner movie, and Gary Cole plays an excellent villain. One of our other favorite characters is Red, played by Danny McBride. If you want to know what “the dopest dope I’ve ever smoked” is, this movie has the answer.

They aren’t strictly stoners, but they’re spacy enough to fit in with the rest of our top stoner movies. If you’ve never seen these movies, Bill & Ted is worth a look, even if you just want to see a young Keanu Reeves.

George Carlin stars as the duo’s mentor Rufus in the movie, a man from the future who travels back in time to help Bill & Ted pass their history report—that sounds just like a good stoner movie plot.

Want to see Joaquin Phoenix in one of the best high movies? Phoenix stars as Doc, a barely competent investigator and fan of a certain herbal remedy, who has to investigate the disappearance of a former girlfriend.

What ensues is a scandalous story about kidnapping and drug smuggling with a bunch of lovable oddball characters stuck in the middle of it all. The wild plot of Inherent Vice alone wins it a spot on our top movies to watch while high.

‘How High’ is a 21st-century classic. Silas (Method Man) and Jamal (Redman) get into Harvard thanks to some supernatural assistance from an old friend. The odds are stacked against them at college, but they stick together and make it work.

Expect some really wacky humor in this stoner movie. The scene where the straight-laced volunteer school officer Gerald makes a joint using sellotape, rolls up a pizza, and tries to eat it all at once is hilarious.

The soundtrack features a lot of now legendary stoner songs; the titular How High? is amazing but watch out for Cypress Hill too. While not for everyone, How High? definitely belongs under ‘good movies to watch while high.’ “You got blunt?” – “You got weed?”

We’re sure there’s something you haven’t seen on our list of what to watch when high. Make sure you have the perfect cannabis strain to go with your movie. Check out our article on the strongest weed to help you decide—you might even need to select a few stoner movies to watch at once.

Enjoyed the selection? Why not share it on social media with some of your friends? That way, they can avoid the trap of spending half an hour trying to choose to watch something before falling asleep.

Ensure you’ve got enough left in the stash to get suitably stoned to enjoy these stoner movies, head over to the Homegrown Cannabis Co. store to check out our latest selection. Happy viewing.