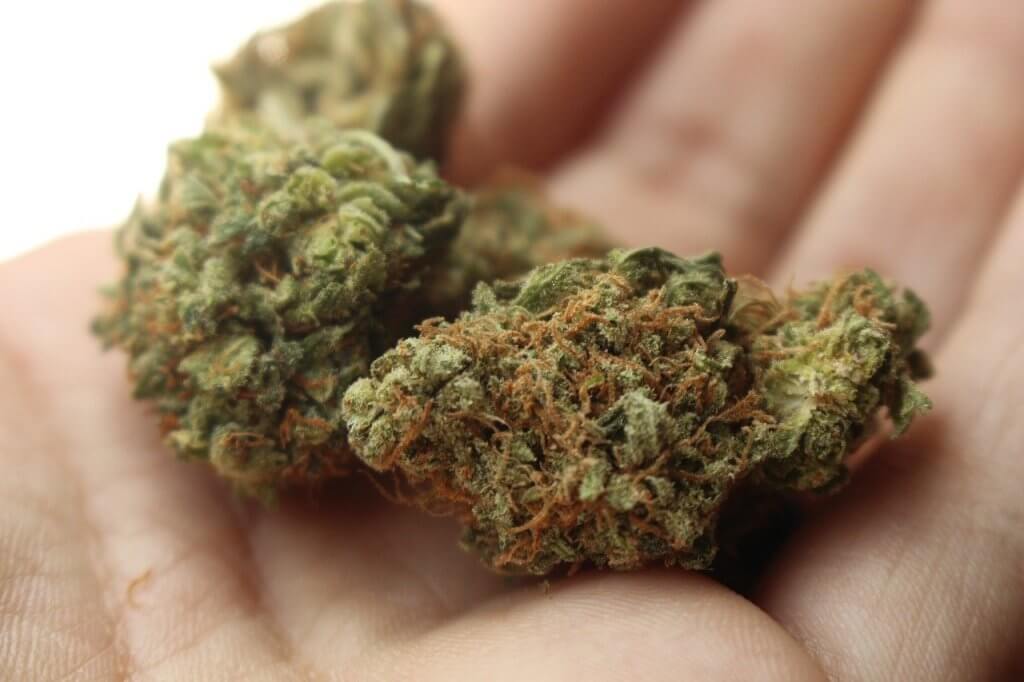 OG Kush is famous!  Really famous and incredibly popular.  So popular, in fact, that there are songs about it.  Songs penned in its honor, by the likes of Cypress Hill and Wiz Khalifa.  So popular that it’s often hard to find in dispensaries because it sells out so quickly.

The origins of its name are as disputed as this hybrid’s parentage.  The “OG” is alternately said to stand for  “Original Gangster”, after old-school hip-hop references, “Ocean Grown”,  in reference to its origins on the Californian west-coast; and even “Over Grown”, a historical website for cannabis growers.

What is OG Kush?

OG Kush is a predominantly Indica hybrid that owes its incredible worldwide popularity to its genes.  Its exact lineage remains a mystery, however, and some claim that it’s a cross between regular Chemdawg (Chem Dog) and an unknown, hardy, Hindu Kush landrace. Many experienced breeders accept that the ‘secret ingredient’ is likely to be a mix of two strains, both prized for their individual traits. The first is Lemon Thai, a Sativa dominant herb with a strong citric scent, and Paki Kush, an indigenous old-world strain from Pakistan, both, weeds are extremely potent.

Of course, it could just be that OG Kush is the bastard son of Chem Dog and a seed that came from undocumented bag seed?  Who really knows?  What is known is that OG’s popularity means that it’s characteristics have been harnessed in many hybrid strains and phenotypes.

What are OG Kush’s Characteristics?

Thankfully, there is one thing that’s not up for debate, the potency of OG Kush Strains!  OG’s THC content is a consistent 20% to 25%, occasionally peaking at 27%.

Intense cerebral effects carry users to a long-lasting, stimulating, euphoric high, that instantly melts away any inhibitions.  Almost psychedelic in nature, it could have been included in our Top Ten Psychedelic Cannabis Strains list!  Potent mood-enhancing qualities uplift the spirit and leave users with a tremendous sense of well-being.

OG Kush is a wonderful stress reliever and, thanks to its Indica traits, can put users into a deep, trance-like state of relaxation. Most people will find themselves couch-locked, at some point in the proceedings.

Drowsiness is almost inevitable and even the most experienced toker will find OG’s gentle, hypnotic effects draw them towards sleep. The best time to use OG Kush is at the end of a tiring day when there is nothing else to do but to chill and rest.

What are OG Kush’s Medicinal Uses?

OG Kush has been used widely and may help users relieve daily stresses and ease symptoms of anxiety, depression, and PTSD.

It has reported analgesic properties and is often used for temporary relief of physical pain. The sleep-inducing, physical body-stone can also help insomniacs.

It is important to note, however, that OG is only a temporary fix to these medical issues, and addressing the underlying cause of health concerns should still be a priority.

People with a low THC tolerance should be wary of over-smoking this delicious strain and should consider lowering the dosage, or switching to a different bud with much lower THC (See Girl Scout Cookies x Kush, below).

We aimed to give you a list of 5 strains in total, but as we’ve just covered the ‘daddy’ of these strains in the introduction, here are an additional 5…

Essentially a medical version of its legendary parent, CBD OG Kush boasts a similar refreshing citrus tang, with a mix of earthy and pine-like notes. Having said that, because of its completely different cannabinoid profile, CBD OG Kush is almost a distinct variant of its own.

This strain does not produce the powerful, euphoric cerebral punch OG Kush is known for, although, its uplifting mental effect is still immensely pleasurable.  On the contrary, CBD OG Kush lifts the soul with minimal cerebral buzz and places the mind in a total state of clarity,  inducing razor-sharp concentration. No foggy vision or grogginess disrupts the user’s mental processes.

It does not couch-lock, but because of its blend of mental and physical effects, the variant is best for nighttime use.  Owing to its sedating properties, the bud relieves insomnia and aids sleep.

After a long, tiring day, Tahoe Kush is a splendid post-dinner or before-bedtime toke.  It offers the best of both worlds, with Sativa and Indica elements in every draw.  Although slightly leaning towards the Indica side, it showcases its cerebral kick first.  With an average THC volume of 22%, the Tahoe Kush ride begins with feelings of great euphoria and giggling fits.  Moments later a wave of physical relaxation crashes in.

The lovechild of OG Kush and San Fernando Valley OG, this invigorating Cali hybrid teases the nostrils with an earthy lemon zest.

The blissful and paralyzing high wipes out worries, stress, and pain, making this another high demand strain at dispensaries.

Renowned as the most potent Kush strain, smokers should not take this plant lightly.  It delivers a heavy punch that can disable the most hardened user, so go easy.  You’ll only need a toke or two for an hour-long euphoric trip.

After that, the physical effects will make your eyelids increasingly heavy, to the point that they’ll close completely and you’ll drift into a night-long state of bliss.

The buzz is mild at the outset but quickly intensifies and a euphoric sensation erases all negativity.  Users find themselves feeling excited and uplifted, with a grin from ear to ear.  With just a couple of takes, the best of both cannabis worlds is evident, in a delightful, long-lasting, head-to-toe high.

OG Kush x Mazar Afghani roots, gift a heavy physical stone, imparting hours of contemplation.  You’ll find the couch to be the most sought-after location but will remain capable of undemanding mobility.

This newly-bred hybrid is quite difficult to come by in dispensaries, it frees joints and muscles from tenderness and tension, and can be used to treat depression, chronic stress, and PTSD.  People who have to endure the physical torment of conditions such as migraines, fibromyalgia, and arthritis are amongst its most regular consumers.

Inevitably, the user will start to feel drowsy and, once sleep arrives, there’s a good chance they won’t wake up until the following day. Insomniacs and people who feel restless or fatigued may find help from this strain.

Girl Scout Cookies crossed with the classic OG Kush is a new strain with even more desirable characteristics than its parents.  It has a unique combo of psychoactive and physical effects that will appeal to both Sativa and Indica lovers.

With Sativa to the fore, a lethargic body high takes a hold, soothing tired and painful muscles and the body feels lighter, but not for very long.  A mellow leaden weight pushes down on the body until the desire to kick back and chill is irresistible.

As the couch begins to envelop the body, the Sativa effects kick in. Optimistic and happy thoughts flood into the mind, and you’ll be buzzing with mental energy, creativity and motivation.

GSC fans and users with low THC tolerance may have found their ideal weed.

With 19% THC and 3% CBD, this strain is said to pack a whole bunch of therapeutic benefits that may help remedy psychological issues, such as stress, anxiety, bipolar disorder, depression, and insomnia.

In addition, this strain’s potent analgesic, anti-inflammatory, and muscle-relaxant properties may alleviate physical aches and pains, caused by the likes of fatigue, back pains, migraines, arthritis, spasticity, and fibromyalgia.

Blueberry x OG Kush has a THC level of 21% to 24% and, in moderate doses, induces a calming head buzz and tranquilizing body high that’s great for uplifting the spirits and releasing stress.

It is a remarkable recreational strain whose high starts with a euphoric rush, creeping into the temples, uplifting the spirit, and erasing negativity.  Users are left basking in a state of happiness and bliss.

What follows is a light, hazy effect and gentle pressure that travels from the back of the neck and down through the whole body, releasing tension in every muscle it encounters.  Relaxation wraps the body in a heavy, duvet-like, Indica stone that’ll make you want to kick back and chill.

Many people feel drowsy and, depending on the dosage, it may take on an even more sedative-like quality, with sleep as the final result.  Blueberry x OG Kush can be quite intense at times, with its physical effects inducing couch-lock.

Medicinal users may find relief for treating stress, depression, and anxiety.  Correct dosing is crucial, though, otherwise, it may make things worse rather than better.  It’s also said to be an effective painkiller, for the treatment of neuropathic aches and pains.

« How to Grind Weed Without a Grinder
What Is The Most Expensive Marijuana? »