Weed Etiquette: Learn The 11 Rules Of Smoking Weed Like A Pro 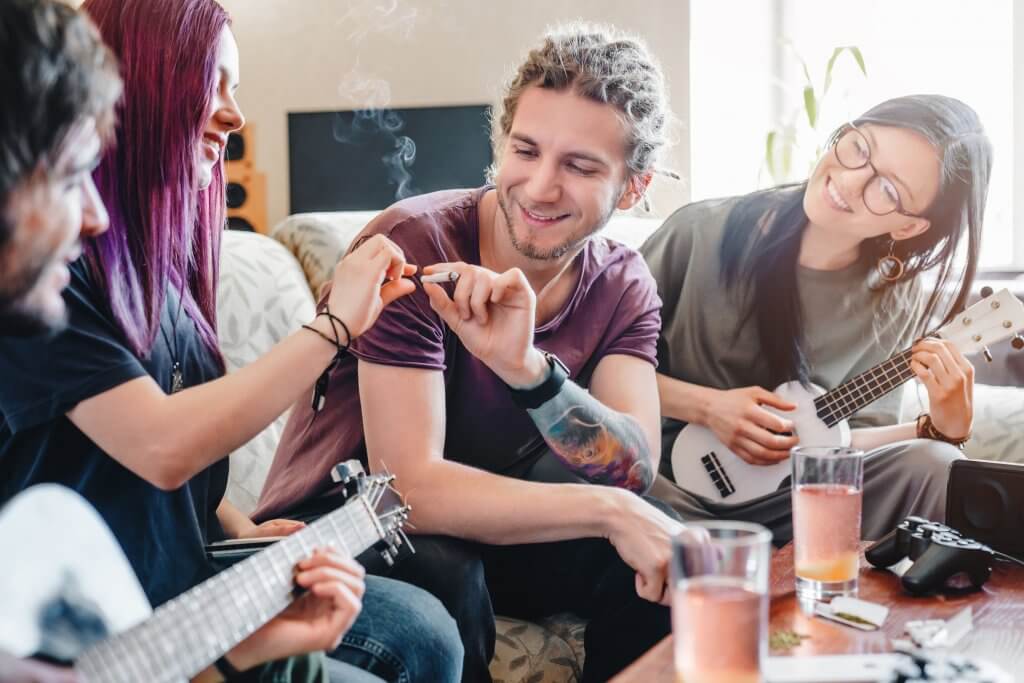 Cannabis smokers are supposed to be the most relaxed, easy-going people around, right? Why would you need particular manners while interacting with them?

You’re right to an extent. Stoners are chill, but the practice of sharing a joint comes with some rules. Many of those are old, stemming from a darker age of social and legal prohibition of marijuana.

Today, they persevere as part of the culture, and it’s an unspoken expectation that you follow them.

Worry not, though. Homegrown is here to help. Join us as we explore stoner etiquette to land you an invite to every future smoking session.

What is weed etiquette?

The rules of smoking weed stem from the inherently social nature of the activity. Generally speaking, bong buddies are always eager to share the love, but they weren’t always encouraged to do so.

Stoners used to hide their hobby and fret about the police, allowing only other people aware of the setup to join. Such an in-group mindset spawned various practices, such as the all-known puff, puff, pass.

Modern tokers maintain these long-standing traditions, despite the more lenient situation we face today. As a result, rookies find themselves fretting their first smoke session.

Should you bring your own? Do you thank the host? How much should you smoke?

In that vein, let’s ditch the crude stoner stereotype and introduce some politeness into the picture. The more people learn the rituals, the closer we get to the utopian smoke ring.

If somebody wrote a book called Smoking Weed: Rules, they’d have to publish a new edition each year.

The number of 420-friendly people grows with each passing month. With this uptake come new conventions, shaping and reshaping the subculture. Add house rules in the equation, and that’s more than a person can reasonably learn!

We’re not here to discuss every single nuance of sharing a blunt, though. This guide on weed etiquette helps you understand the basics and ensure everybody has a good time.

With that in mind, we rounded up eight rules that apply whenever you’re blazing with others. We’ll then move on to three location-based practices to ensure you remain a good weed citizen, wherever you may go.

Let’s start by sharing eight basic principles of marijuana etiquette. These tend to apply in smoking circles of all walks of life, and they’re your best bet as a newbie.

Tip: If a particular group has a different rule of smoking weed than one mentioned here (for instance, people don’t share joints, only smoke in the same room), let democracy decide which to follow.

This first part of pot smokers’ etiquette is imperative. In fact, it belongs to the realm of common sense rather than politeness.

Never make your session problematic by blazing in the wrong area, having minors around, or bringing more than the allowed amount on your person.

Nobody likes worrying about the law, adding an air of tension to what was supposed to be an enjoyable experience. What’s more, people are prone to stereotypes. You’re giving all tokers a bad rep by not being mindful of the law.

Learn about states where weed is legal. If yours is on the 420-friendly list, explore which rules and regulations apply before even grabbing your grinder. Always know where to smoke weed legally and by the book.

Sharing is half the beauty of the smoking session. It promotes friendship, making you feel like a part of a community that looks out for each other. Gathering around a beautiful flower, picking up the first whiffs, and getting ready to take that puff is electrifying.

Simply put, it goes against the weed etiquette to light up and refuse to share.

Sharing refers to adding money or buds to the common stash, too. Cannabis is expensive, and freeloading off the host is bad manners, at best. Organize a rotation, donate to a bud-purchase fund, or bring a gram to the event to maintain fairness.

Stoners are an inclusive bunch, and it’s correct weed-smoking etiquette to offer a puff to the newbie.

Pushing them to toke is anything but cool, though. A circle is no place for peer pressure.

Even if a person normally smokes, you should value their choice to skip. If somebody is downright uncomfortable with the activity, provide a separate, smoke-free space. Alternatively, prevent the issue altogether by stating what’s going on before the event itself.

In most cases, people relax after spending some time around cannabis. The herb is also getting destigmatized, which is doing wonders for the general attitudes. You can only hinder progress by making a person feel uncomfortable or pressured.

With the increasing acceptance of cannabis, the community is finally free to show it the appreciation it deserves.

Gone are the days of puffs behind the gas station. Treat your buds as you would fine alcohol, with the right equipment and enough time to enjoy the intoxication.

Weed etiquette also includes setting the stage, especially as the host. If you’re going to indulge in couch-lock weed, prepare the atmosphere for a bunch of stoned people. Anything from lights to music and content playing on the TV makes the experience more satisfying for everybody.

This section of the marijuana etiquette guide relates to respect, but it’s more practical. Whichever ingestion method you’re using, it’s impolite to dump the buds before the circle and light up carelessly.

Keep your products and equipment clean and well-organized. As a rule of thumb:

Much like your equipment needs to be up to par, pot smokers’ etiquette includes bringing only quality buds to the event.

Of course, you can’t always guarantee top-tier weed if buying from a supplier. You can remove branches and seeds before packing your party reserves, though.

This old maxim applies to this day, and it’s simple. Take two hits and pass the blunt, joint, or spliff to the left.

The direction is part of the weed etiquette due to the herb’s effects. Once they hit, it can be hard to remember who smoked last. Maintaining one direction lets the session flow smoothly.

Don’t park on the green, either. This expression relates to a person forgetting to pass after puffing, letting the precious cannabis burn to waste. Hand it over after the second inhale.

#8: Watch out for your homies

Finally, stoner etiquette includes companionship. If everybody’s experienced, it’s as simple as paying attention to how your buddies are doing. When you first have a novice over, designate a sober watcher to tackle any potential issues.

Communication is key in either case. Talk to all circle members and agree on how much you want to smoke. Make a deal to watch out for each other to nip bad experiences in the bud.

Some knowledge goes a long way in this aspect of marijuana etiquette.

The stages of being high look different from one individual to the next. Still, it pays to understand the basics, as it’s much easier to notice if a person gets overwhelmed. Get them some water, have a little conversation, and make them feel safe.

Know how much weed is too much, and stop a person before passing that line. They might be annoyed at first, but frustration beats suffering the consequences of overindulgence.

What we explained above applies wherever your blunt may find you. Let’s now discuss how to smoke weed responsibly based on your setup.

#1: Ask for permission at social gatherings

You can’t burn one at a party, even if all guests are casual. It’s per marijuana etiquette to check whether everybody’s okay with it.

Note: Don’t light up if the confirmation isn’t enthusiastic. People might nod along to avoid seeming stuck-up, but everybody will have a better time if you move to a more discrete location.

#2: Assess the situation for public smoking

Stoner etiquette always includes caring for others, even individuals not in your smoke ring. When you’re in public, always check whether pot smoking is allowed in the area. If there’s no clear sign, check with present authorities and find the designated spot.

Once you find the proper area, examine your surroundings. If people seem like they’d mind your activity, it’s better to move than cause tension. Maintain public order to keep your image as a stoner intact and help the movement further destigmatize the activity.

#3: Keep at-home sessions mindful of others

If wondering where to smoke pot, your home is the first place to come to mind. Even this setup calls for some rules.

Ask your housemates whether they’re fine with the event, if you don’t live alone. If yes, invite them to join.

If they’re against it, come to an agreement that suits both parties. For instance, you might agree to keep the windows open, stick to one room, or only smoke at home when they’re elsewhere.

Invest in an air freshener or a dehumidifier to get rid of the scent. Don’t smoke in shared spaces, and never try to go under the radar if you’ve received a downright no.

Weed etiquette also indicates that you should help guests get comfortable, especially as the effects kick in. Keep food and drinks nearby, supply seats for everybody, and provide other little comforts to make them enjoy being high in your home.

Overall, maintaining proper weed etiquette is only growing in importance. As more people join the movement, such practices ensure that the community remains uplifting and harmonious.

Luckily, the various rules of smoking weed boil down to one—treat the 420 with respect.

Most conventions become second nature after several sessions. As long as you’re mindful of yourself, the others, and your buds, you can’t mess up.

Keep the rules we discussed in mind but try not to worry too much. Let yourself have a good time, strengthen your social bonds, and ride the wave.

There’s no better way to surprise your fellow stoners than by bringing homegrown marijuana. Buy seeds from our library and become your group’s supplier of the highest-quality bud.

Stay tuned to our blog for more handy guides and educational resources. We take deep dives into everything from cultivation to culture, ensuring you never miss out on the news from the weed world.