Why Women are Using Cannabis for Menopause 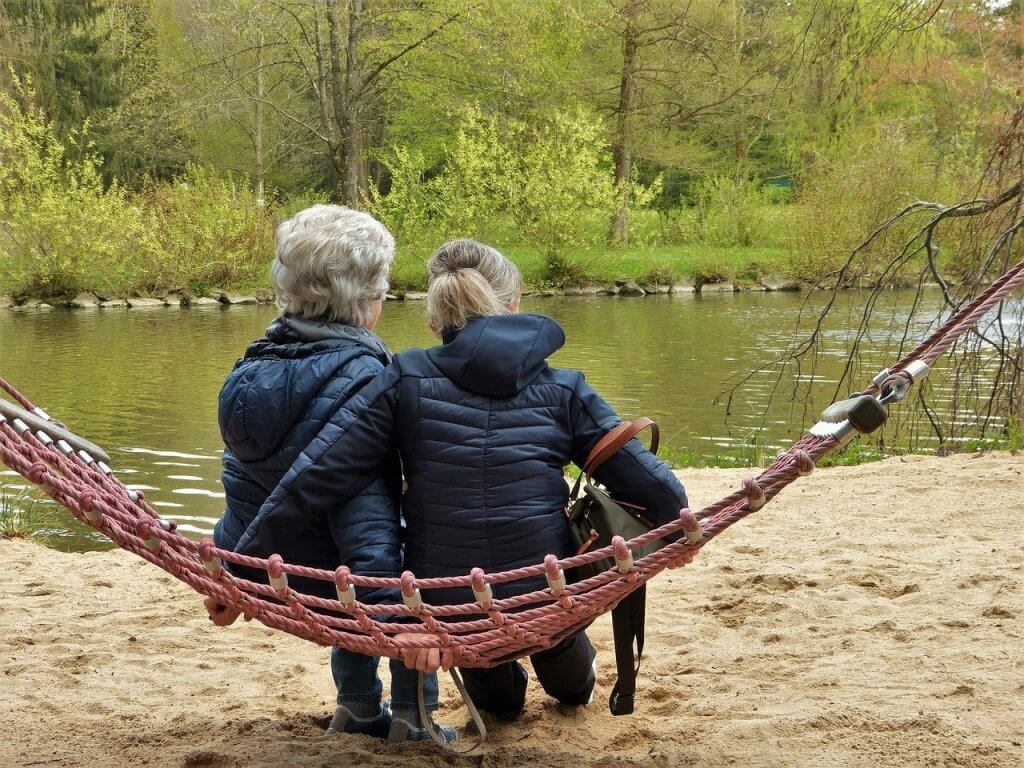 Women who struggle with menopause not only often face severe physical symptoms, but along with it, the stigma of being able to talk openly about the “M-word.” Menopause happens to women usually in their 40s and 50s, signaling the end of her child-bearing years. Start and duration generally vary from women to women, but the experience is all too similar, regardless. While many experts argue that menopause doesn’t require treatment regularly, many women are turning to cannabis for menopause.

The feeling of extreme heat or “hot-flashes” across your upper body, insomnia, anxiety, mood swings, putting on weight, irregular periods, night sweats, and in some cases, vaginal dryness that can cause pain during intercourse. If these symptoms sound all-familiar to you or to someone you love, there are many different ways women relieve menopause struggles these days that you’re bound to find one that suits your exact preferences.

Though the menopause experience of women everywhere is never simple, dealing with life doesn’t have to be a hassle. Cannabis is becoming the new favorite alternative treatment for women dealing with menopause and its symptoms in the United States. Generally, older adults in the US are more open to medical marijuana’s uses and acceptance than ever before. Additionally, women who menstruate also use marijuana for cramps.

While the medicinal use of cannabis has long been regarded as a traditional herbal medicine for women’s fertility care, there are also recent findings to support that even on the chemical level, using cannabis has the potential to relieve symptoms of menopause. With growing research and development, cannabis now comes in so many forms to cater to specific needs. Of course, with anything related to health, always seek a doctor’s advice to find the right dosage and medical guidance.

But what do women and experts say about cannabis use for menopause, and what factors do women consider when using alternative green medicine for treatment.

Cannabis use Among Women with Menopause

According to a September 2020 study from The North American Menopause Society, (NAMS) an increased report of women currently using cannabis to manage their symptoms was presented during their annual meeting.

The study found that roughly 27% of those sampled in Northern California who participated in the Midlife Women Veterans Health Survey (232 women with mean age of 55.95 years), reported having used or were currently using cannabis to manage their symptoms. An additional 10% of participants expressed an interest in trying cannabis to manage menopause symptoms in the future. In contrast, only 19% reported using a more traditional type of menopause symptom management, such as hormone therapy.

“These findings suggest that cannabis use to manage menopause symptoms may be relatively common,” says Carolyn Gibson, PhD, MPH, a psychologist and health services researcher at San Francisco VA Health Care System and the lead author of the study. However, it is still advised that women seek the help of professional healthcare providers to maintain safe and effective menopause symptom management.

Historical use of Cannabis in Traditional Medicine

Historically speaking, the use of cannabis for reproductive health care has long been recorded from as early as the ancient middle and far east civilizations around Mesopotamia, as reported by Ethan Russo MD in a 2008 historical review of cannabis treatments in obstetrics and gynecology. Anywhere from pre- to post-natal, and eventually to menopause, hemp or cannabis has played a role in women’s medicine throughout history.

Contemporarily, cannabis for menopause symptom management was most often used in women reporting hot flashes and night sweats. Such use did not differ by age, race/ethnicity, socioeconomic status, or mental health conditions reported in the 2020 NAMS study.

However, both experts and industry agree that more studies must be done to fully understand the effects of cannabis during menopause. Notwithstanding, the myriad of research done to understand what makes cannabis potent, from its chemical components to the best varieties, forms, and dosage. Let’s take a look at why women are turning to cannabis for menopause treatment.

Cannabis use was more commonly reported among women suffering from hot flashes (67%) and night sweats (68%) within the past two weeks, according to the results of the study. And to understand how cannabis helps with menopause symptoms like hot flashes and night sweats, we need to look at the core chemical compounds of the cannabis plant and women’s hormones.

Cannabis has been found to have direct interactions with a woman’s endocannabinoid system (ECS), first reported in 1992 by Israeli researcher Raphael Mechoulam and his associates, Dr Lumir Hanuš and Dr William Devane.

Mechoulam and his team discovered an endogenous cannabinoid – or endocannabinoid – which they called ‘anandamide’ as derived from the Sanskrit ‘ananda’ meaning ‘bliss’. Researchers found that anandamide deficiency may cause stress-induced anxiety and irritability for both women and men.

In particular, cannabis has been found to respond positively to two critical parts of the ECS – CB1 and CB2 – which are both G protein-coupled receptors (GPCRs) that control the passage of neuro signals in every important physiological process within our bodies. From immune system function to regulating metabolism to how we taste and smell food, GPCRs take stimuli from outside of cells in the body and convert them to signals inside cells.

Pharmaceutical drugs that target GPCRs are not uncommon. Some common drugs for migraines, asthma, stomach ulcers, allergies, or pain also target GCPRs. Similarly, GCPRs, like CB1 and CB2 receptors, also react with cannabis; albeit, cannabis has been shown to have less adverse side effects than typical pharmaceuticals.

Cannabis Effects on the Body

While marijuana is widely perceived for its ‘lack of toxicity’ due to the fact that it is physiologically impossible to take a lethal dose of cannabis. It is important to note that more research is needed to provide clearer evidence of these effects. What is known though is that on some cases, cannabis may trigger acute psychiatric episodes in people who are predisposed to mental illness. It is recommended to take necessary precautions at all time, and talk to a medical expert when possible.

According to the website, healtheuropa.eu, “We now know that reproductive hormones and endocannabinoids interact bidirectionally. Endocannabinoids decrease activity in the hypothalamic-pituitary axis and reproductive hormones affect protein expression in the ECS. Estrogen may increase the synthesis of anandamide or it may inhibit the enzyme known to degrade it, FAAH (fatty acid amide hydroxylase). Thus, decreasing estrogen levels also cause a decrease in our endogenous ‘bliss’. In addition, research has demonstrated retrograde signaling of estrogen-stimulated endocannabinoids suppresses gamma-Aminobutyric acid (GABA) release from ECS receptors. GABA is known to reduce anxiety and induce sleep by interfering with negative thoughts and memory function.”

According to a research by Moriarty, cannabidiol inhibits the degradation of anandamide which triggers stress and mood swings. In essence, CBD works to protect one’s bliss by making sure stress triggers are reduced in an effect that many relate to as relaxation and even euphoria. Good feelings associated with being ‘high’ may also enhance libido, along with the availability of cannabis-infused vaginal suppositories and lubricants, which can make menopausal intercourse more enjoyable.

With over 100 cannabinoids identified so far in the Cannabis sativa plant, CBD, for example, is an essential component of medical marijuana that can directly affect inflammation, anxiety, or spasticity. The THCa, or tetrahydrocannabinolic acid, also commonly found in marijuana, have perceived effects on pain. Some also say that CBN found in weed has some effect with sleep. CBD, THCa, and CBN and different cannabinoids present in varying concentrations of each specific cannabis strain are currently being researched for their individual health-related effects.

In choosing marijuana strains, it’s important to know some broad understandings of how compounds react based on type or amount used.

Whether you’re new to cannabis or not, it cannot be overstated how important it is to do prior research to discover how cannabis is used for menopause. And because weed is a versatile plant, there are also many ways cannabis can be integrated in your life. Here are some ways women are discovering how to use cannabis during menopause.

Depending on where you live, knowing the law on cannabis is always a crucial part of research as it could affect how you use cannabis for menopause. And once you’ve decided research stage is enough, please consider the following.

When you are deciding whether marijuana intake through smoking or vaping is best, consider that inhalation will have a rapid onset of relief. This could be particularly useful for acute conditions like insomnia. Although if you are in some other hormone therapy, there may be cases where the doctor could advise against marijuana smoking, but could be fine with other forms of hemp-derived menopause treatments like vaping or edibles.

There is also wider acceptance to consume cannabis in other discrete and convenient forms like edibles, which basically means that you can still feel the effect of weed without having to deal with smokes or any unwanted smells. Cannabis-infused treats, dishes, and drinks are truly seeing increased appreciation in recent years. Women with sweet tooth or anywhere you can infuse edible cannabis oil can make for satisfying food. What’s more, if you’re inclined to making your own delicious canna-food, you can even try your hands on making your own edible cannabis recipes.

With the onset of confinement, many people are turning into bringing the nature indoors by taking care and growing plants at home. This could be the perfect companion to soothing both your menopause pains and stay-at-home blues. To grow marijuana seeds at home, there are plenty of tips, guides, troubleshooting, and a bit of fun plant science to help guide your journey in cannabis cultivation. There are plenty of cannabis strains to choose from (autoflowering seeds or feminized seeds) whether you’re a beginner or seasoned at cultivating your own supply.

You can also pick the right strains you need for therapeutic relief. Choose from CBD or THCa-rich strains, or check how terpenes can affect the plant to find the top cannabis plant you can grow at your own place. There are plenty of other associated benefits to growing cannabis at home.

When you finally have the greens, how often should then be the intake?

Many people recommend taking it in small doses when you’re just starting. Alternatively, micro dosing is becoming the daily cannabis routine women are turning to for relief from physical and mental symptoms of menopause while still allowing a functional and productive day.

One micro dose is usually considered to be around 2.5mg of THC; but more importantly, you also need to consider your tolerance, metabolism, and size to determine a healthy micro dosage. To help manage menopause symptoms like stress and anxiety, insomnia, brain fog, inflammation and pain, taking the right amount as with micro dosing is key.

Using marijuana to help with menopause is based on many factors for every woman, but don’t forget to speak to a professional when used in conjunction with other treatments or conditions. We are only starting to reap the benefits of more research and development on the potential uses of cannabis to our health and well-being. With this, many are hopeful that issues on women’s reproductive health, including easing menopause symptoms, can be taken into account in when learning about the benefits of marijuana.