Different Cannabis Terpenes and Their Flavours 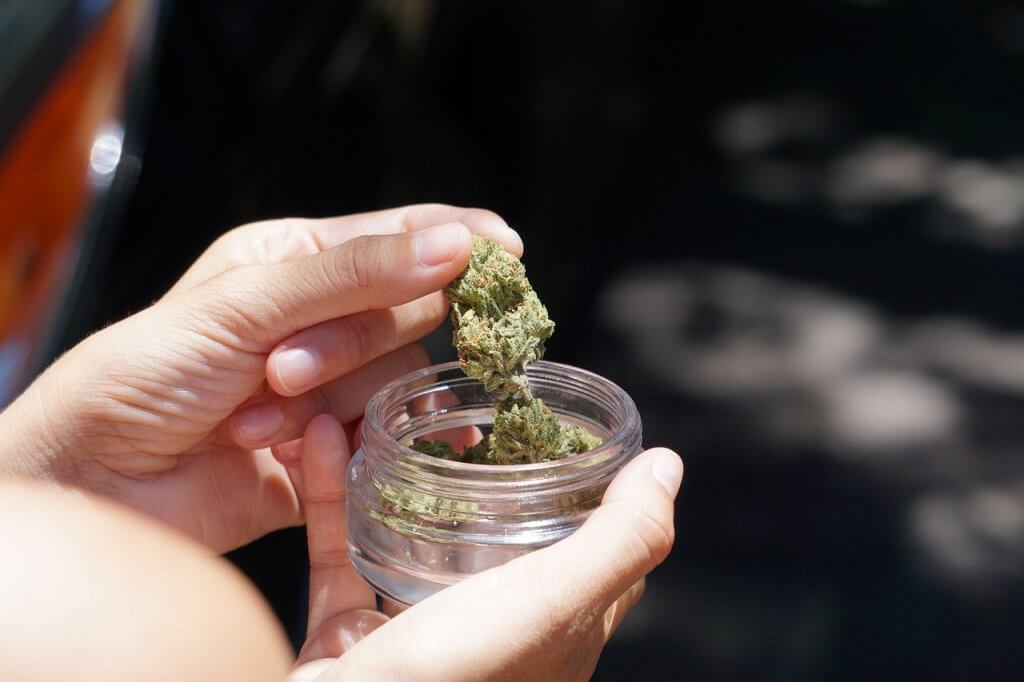 A healthy, flowering cannabis plant is a glorious thing to behold and when you look closely at its small leaves and flowers it is possible to see glistening, translucent resin glands protruding from the buds. These resinous little outgrowths are called trichomes.

There are many different types of trichomes on a cannabis plant, each with a different role to play, and it is the Capitate-Stalked Trichomes which are the plant’s primary source of cannabinoids, oils, and terpenes.  Capitate-Stalked Trichomes develop after flower formation has commenced, and primarily occur on the flower heads and leaves of unfertilized, female plants, in other words, your ‘blessed buds’.

In addition to housing all your weed’s goodies, like THC and CBD, trichomes play an important role in the survival of the plant, from regulating heat and the effects of the sun to deterring pests and protecting the plant from being eaten.  The smell and taste that might deter some predators from chowing down on your weed plant are products of terpenes.

Produced in marijuana’s trichrome glands, terpenes are oily, organic compounds, aromatic hydrocarbons, that often emit strong and distinctive odors.  There are said to be around 20,000 different terpenes across the planet’s flora, with well over 100 different terpenes within the cannabis family alone.  Some experts claim that there might be as many as 200 terpenes in weed, but it is pretty widely agreed that the figure is between 120 and 140.

Just as a fingerprint differentiates us, so every strain of cannabis leans towards a unique terpene type and composition.  It is known that terpenes provide the taste and flavor profile of a given strain, but it is now believed that a strain’s terpene composition has a profound influence on a marijuana’s effect.

Terpenes appear to be so influential on the outcome and effects of using marijuana, that the cannabis world is now reconsidering the age-old beliefs of Indica’s and Sativa’s characteristic properties.

More study is needed to understand how and to what extent terpenes are pertinent to the character and effects of an individual weed strain.  Some terpenes might promote relaxation and relief from stress and anxiety, for example, while others are said to boost focus and acuity.   To complicate matters further, the effect of any given terpene might change when in the presence of other cannabinoids and flavinoids.  This combined influence is called ‘the entourage effect’ and there is also further research required to understand how the different elements combine and work in harmony to deliver a particular outcome.

Cannabis labs often analyze terpene content so a user might better predict the effects of a particular strain.   It is entirely possible that, in the future, manipulating terpenes and harnessing their individual and combined synergistic properties could provide substantial therapeutic benefits for medical marijuana users.

When researching terpenes on the net, you may encounter the term ‘Terpenoid’.   The words terpene and terpenoid are increasingly, and often incorrectly, used interchangeably, but they do in fact have different meanings.  As we mentioned, terpenes are hydrocarbons which dictates that the only elements present are hydrogen and carbon.  However, terpenoids are terpenes that have been chemically changed or denatured, through a process such as drying and curing the flowers.

Which Terpenes are Found in Cannabis?

With the jury out on the exact number, a definitive list of weed’s terpenes is impossible to compile.  A list of anything up to 200 individual terpenes would also make for some very dry reading and is probably best left to academic and scientific papers.

However, there are a few dominant terpenes, and knowledge of the most common will serve the selective ganja user well.  Here are 17 cannabis terpenes you should know:

Myrcene is believed to promote relaxation and have a calming effect.  It is the most common of all terpenes found in modern cannabis strains.  It can also be found in Lemongrass, Mango, Hops, and Thyme.

It has a pronounced herbal profile, with hints of cardamom, cloves, and musky earth.

Sabinene shows potential to be a new, natural source of antioxidants and anti-inflammatory drugs, suitable for developing food supplements, nutraceuticals, and plant-based medicines.

Its aromas are reminiscent of holidays on the Mediterranean coast with traces of pine, orange, and spice.  Sabinene can also be found in Norway spruce, black pepper, basil, and nutmeg.

Found to be a useful analgesic, it can also treat inflammation and anxiety.  It is a prevalent terpene in nature and can be found in plants such as pine needles, rosemary, parsley, dill, and basil.

As its name implies, Pinene is a pine-forward terpene.

As a good natural insect repellent, Borneol can help greatly in the prevention of diseases born by insects, like Zika virus, West Nile virus, Chikungunya virus, dengue, and malaria.  It is widely used in Chinese Medicinal preparations and acupuncture.  In addition, Borneol is reported as being beneficial in the treatment of some cancers.

It has a herbal minty scent and is found in herbs like rosemary, mint, and camphor.  Large quantities of this terpene can also be found in Valencia oranges.

This terpene is celebrated for its anti-inflammatory properties and is possibly effective in treating pain, anxiety, depression, and even ulcers.  It can also be found in Cinnamon, Black Pepper, and Cloves.

Its principal characteristics are that of pepper, spice, wood, and cloves.

Also known as cineole, Eucalyptol is said to relieve pain and shows anti-fungal and anti-bacterial properties.  Eucalyptol is also shown to have some promising effects on Alzheimer’s.

It is found as the dominant terpene in Eucalyptus trees and has a distinctive, minty, and cool aroma.   Most cannabis strains only contain very low levels of this terpene.

No prizes for guessing the flavor profile of this one!  This citrusy terpene can also be found in Juniper, Rosemary, Peppermint, and is contained in fruit peels.  It is believed to provide relief for anxiety and stress.

Phellandrene’s special medicinal properties have made it a traditional treatment in Chinese Medicine for digestive disorders. It is a dominant component of turmeric leaf oil, which is used to prevent and treat systemic fungal infections.

Phellandrene has an aroma of peppermint and citrus and is used as a flavoring in food products.

It was first discovered in eucalyptus oil and is present in many plants’ essential oils.  Phellandrene is also found to be present in a number of herbs and spices, including cinnamon, garlic, dill, ginger, and parsley.

Terpinolene is a terpene believed to give a big lift.  10% of all cannabis strains are said to benefit from its uplifting effects.  It can also be found in Cumin, Nutmeg, Tea Tree, and Lilacs.

Its flavor profile is floral, piney, and herbal.

It is believed that Humulene can provide anti-inflammatory benefits.  It can also be found in basil, coriander, cloves, hops, and certain woods.

Its profile is unsurprisingly hoppy, earthy, and woody.

With a wealth of medicinal properties, this terpene is said to be anti-fungal, antibacterial, antiseptic, and antiviral.  It may also work as a decongestant.  Ocimene can also be found in kumquats, mangoes, orchids, mint, parsley, pepper, and basil.

It has a sweet, woody-herbal profile.

Trans-nerolidol has notable antiparasitic, anticancer, antioxidant, antifungal, and antimicrobial properties.  Its smell is generally woody, floral, and citrusy with overtones of rose and apples.

This secondary terpene can be found in plants such as jasmine, lemongrass, and tea tree oil.

Also found in lavender, Linalool possesses similar mood-enhancement and sedative traits, with the ability to treat insomnia and anxiety.  It is also said to be useful in the treatment of depression, pain, inflammation, and neurodegenerative disease.

It has a pronounced floral note.

Carene has the reported ability to aid in healing broken bones and could help individuals suffering from osteoporosis, arthritis, and fibromyalgia.  It has also been found to stimulate memory and help with memory retention; the holy grail for Alzheimer’s and dementia researchers.

Its sweet scent is considered reminiscent of cypress trees.  It can also be found in plants like rosemary, basil, bell peppers, cedar, and pine.

When mixed with vitamin C, Camphene becomes a powerful antioxidant and it is widely used as a topical treatment for skin issues such as psoriasis and eczema.  Its greatest promise is in reducing the risk of cardiovascular diseases, through its ability to lower levels of cholesterol and triglycerides in the blood.

Its smell of damp woodlands, fir needles, and musky earth and is often mistaken for myrcene, which provides cannabis’ distinctive aroma. It can also be found in ginger, hyssop, horse-chestnut, and rosemary.

Geraniol has shown much potential as a neuroprotective agent, preventing damage to the brain and spinal cord from ischemia, stroke, convulsions, or trauma.  In addition, geraniol is a good antioxidant.

Often used in aromatic bath products and body lotions, it smells of roses, peaches, and plums.  It is present in lemons and tobacco.

Higher concentrations of pulegone are found in rosemary, than in any cannabis strain.  As a component of Rosemary, it is believed to help break down the neurotransmitter acetylcholine in the brain, enabling nerve cells to communicate more effectively.  A recent report indicated pulegone may have significant sedative and fever-reducing properties.

Pulegone has a pleasant peppermint aroma and is considered to be a strong insecticide.  It is also found in a number of mint varieties and American ginseng.