Everything You Need To Know About Thai Stick 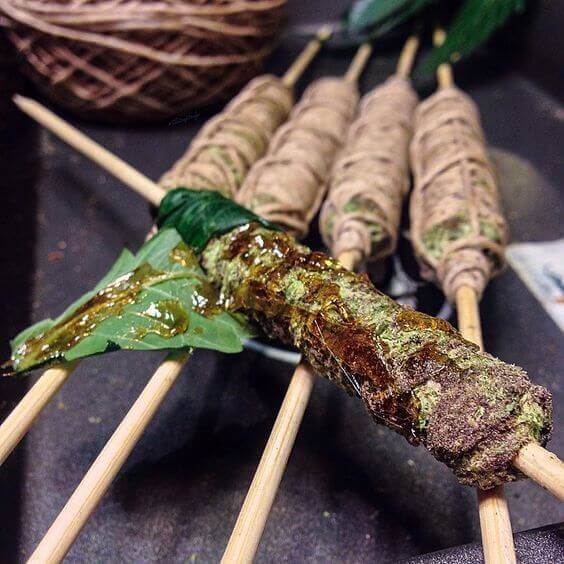 Like many mind-blowing substances, the Thai stick rocked the 60’s and ’70s. Many today have no clue what a Thai stick is except in Thailand, where it’s still prevalent.

The Thai stick, the earliest weed cigar, dates from the 1960s in the US, and as suggested by its name, is a Thai invention. Thai sticks were crafted from a particular Sativa strain produced in the mountains.

The traditional Thai sticks demanded high precision and several weeks stored underground to maximize their extreme potency. They were legendary during the ’70s as they injected a superior buzz like no other.

Check out what a Thai stick is, the Thai stick’s origins, how to make one at home, how to smoke it, its effects, and absolutely everything else you need to know about this legend.

What is Thai stick weed?

It’s not surprising that even seasoned stoners may be unfamiliar with Thai sticks—just like the story behind the 420 meaning. So, what are Thai sticks?

These green monsters are weed cigars made of buds and covered in leaves. When you unwrap the layers of these Thai stick weed kebabs, you’ll discover that there’s a lot more happening inside.

Thai sticks grew trendy in the 1970s in the United States. They’re a marijuana “cigarette” that emerged in Thailand. Old school Thai sticks were first used in northeast Thailand, which is particularly conducive to weed growth. As the name implies, a Thai stick is an overly-large stick of marijuana buds attached to a stem.

Production is lengthy, involving smearing cannabis with oil and curing it for a month. At its foundation, though, the marijuana Thai stick is a relatively straightforward construction. It‘s a cigar-like spliff that burns for hours and gives an incredible high.

Thai sticks often include cured flowers impaled on bamboo, covered in fan foliage, and secured with the plant’s fibers. Apart from attaching it to a stick, this method also removes moisture or ‘cures’ it.

Thanks to the increasing weed legalization, the fancy Thai stick blunt is now a more significant dispensary offering in states where weed is legal. However, the current version’s forerunner, the Thai stick weed, has an ancient history.

The smoking sensation it gives may differ. Expect couch lock weed effects. A Thai stick may get dunked in concentrates or covered with kief. When removing the bamboo to smoke, the residual hole enables adequate airflow to combust the flower, leaf, and oil.

The history of Thai stick in the 1970s

Thai sticks are inventions by hill tribes in northeast Thailand, though their exact origins are uncertain. The Thai stick weed didn’t reach the US until the ’60s and ’70s when Vietnam military veterans and American surfers began sneaking Thai sticks home.

The motive was universal, whether that was surfers, Vietnam soldiers, or businessmen trafficking Thai sticks into the United States: money. Thai stick in the 1970s that went for $3 a kilo in Thailand easily commanded $4,000 in any metropolis in the United States.

As a smoking fix or merely as bud, Thai stick acquired widespread acclaim after it arrived in the U.S. It soon became the “Thai stick weed 70s” because its richer flavor and general body high outstripped everything else on the market.

In Thailand, Thai sticks and most of the grown marijuana for making it were destroyed in the late ’70s. The Thai government launched a crackdown on drugs, backed by the US.

Its prime goal was to disrupt opium sales in the golden triangle. However, weed got injured in the hullabaloo. Growers got induced to destroy their plants and cultivate coffee with a clutch of American money.

The US Thai stick supply network collapsed in the ’80s, and not until the current legalization boom did these old canna-cigars make a resurgence.

What are the effects of Thai stick weed?

The effects of Thai sticks marijuana depend on the strain used and are no different than hitting a joint or blunt. The dissimilarity arises in the intensity.

The psychedelic high centers on the brain, given its sativa-rich heritage. These effects usually include a mild, pleasant numb head feeling, as well as a laidback and cheery mood. Aside from a broad sense of joy and being lively, its users frequently exhibit greater sensitivity and deep focus.

Due to their higher potency, Thai sticks deliver a more intense high. And, if it gets too much, some users get anxiety and paranoia. Regardless of the variety, it’s similar to other smoking techniques in that it causes dry eyes and cottonmouth.

The low CBD level of Thai sticks limits their usage as a wellness intervention. Simply put, it can’t match the current medical strains. That doesn’t mean you won’t get any health benefits of marijuana by smoking in this manner; it just means it’s not the best.

Though small, its CBD constituent is anti-inflammatory. Together with THC’s muscle-relaxing properties, it can help alleviate pains and aches.

Long after implementing harsh restrictions against the making of Thai sticks, laws are shifting in response to the increasing acceptance of weed use.

Are there substantial distinctions between modern Thai sticks and the original Thai stick? Thankfully, nothing much has shifted, save that opium isn’t painted onto the Thai stick coat—weed concentrate and kief took that spot. Apart from this, the current Thai stick making process and smoking methods are almost identical to the past.

The development and advancement of indoor growing techniques in the US relocated the weed supply chain near home. Weed has flourished outdoors during warm months in our backyard ever since.

However, the temperature, soil, humidity, flora, and indigenous animals are different from Thailand. This means that variants of Thai stick that thrive in Thailand struggle to develop in the US or even fail to grow.

You can attempt to mimic the settings indoors but may lack the tech. While the grade of the marijuana used to make Thai stick in Thailand may vary from that in the US, securing it is much easier. This supply chain simplification significantly improved the stick’s ready accessibility throughout the country.

Nowadays, producers of Thai stick marijuana have dispensed with traditional strains in favor of contemporary hybrids. There are still a few who employ original pure breeds, but they come at a premium.

Chocolope—an award-winning descendant of Chocolate Thai and Cannalope—is among the famous blends of Thai ancestry in use today. Among the several landrace strains available throughout the US, Wild Thailand is one of the most beloved.

How to make a Thai stick

Making Thai sticks is simple. However, it needs a lot of effort and keenness. It’s best to make many at once to optimize your efforts. Do you fancy making a Thai stick?  Here’s the procedure.

Assemble your Thai stick materials in a clean area with plenty of room to work.

Process of making a Thai stick

Producing Thai sticks takes ages, but you can expedite the process. After enveloping it in the first weed leaf layer, coat it with a tiny portion of hash oil or sugar water. Layer the second marijuana leaf and do the same.

How to smoke a Thai stick

While the Thai stick cannagar making process is intricate, smoking isn’t. This is how to smoke a Thai stick.

Thai stick is still available in some legalized states and countries. Decades after the drug fight wrecked the weed industry, Thai sticks included, regulations have shifted, and there’s increasing acceptance of weed use. Most current producers have dispensed with traditional strains in favor of contemporary hybrids.

Does Thai stick get you high?

Thai sticks weed gets you high to a glorious degree. The impact on your mind and body is tremendous. Just a couple of puffs can unlock a world with untold possibilities. However, you wouldn’t want to toke too much of these monsters, especially when using couch-lock weed.

What strain is Thai stick?

Although a Thai stick weed plant exists, contemporary Thai sticks come from any variant. Thai sticks produced in Thailand throughout the ’70s were likely from landraces rather than Heirloom cannabis strains. Current tokers prefer their Thai sticks infused with their favorite pot.

How much does a Thai stick cost?

A Thai stick costs about $65, with some priced over $100, depending on your state. At prices beyond $100, it may be best to get weed seeds and rear your plants. Strains like Blue Dream and Northern Lights are excellent choices, providing great buds to enjoy Thai sticks affordably.

Get your Thai sticks to stick for ages

Place your homemade Thai sticks in a plastic carrier to replicate the authentic flavor, then hide them three feet underground for a month. You could also seal your weed airtight and wait for a week.

If possible, make multiple Thai weed sticks at once. The rest will cure while you relish the first. Then decide whether the difference is sufficient to justify the lengthy care and curing.

Selecting your favorite buds guarantees a superb experience. You want this as you’ll be popping your Thai sticks for eons. If you make ‘em well enough, don’t be surprised if it’s the only way you’ll want to get high.

Check out the Homegrown Cannabis Co. store for the best weed seeds that guarantee bumper yields to feed your Thai stick appetite. Know any DIY tokers looking for a new project? Share this blog and you could be puffing your own Thai sticks in no time!