Is Weed Legal in Alabama? 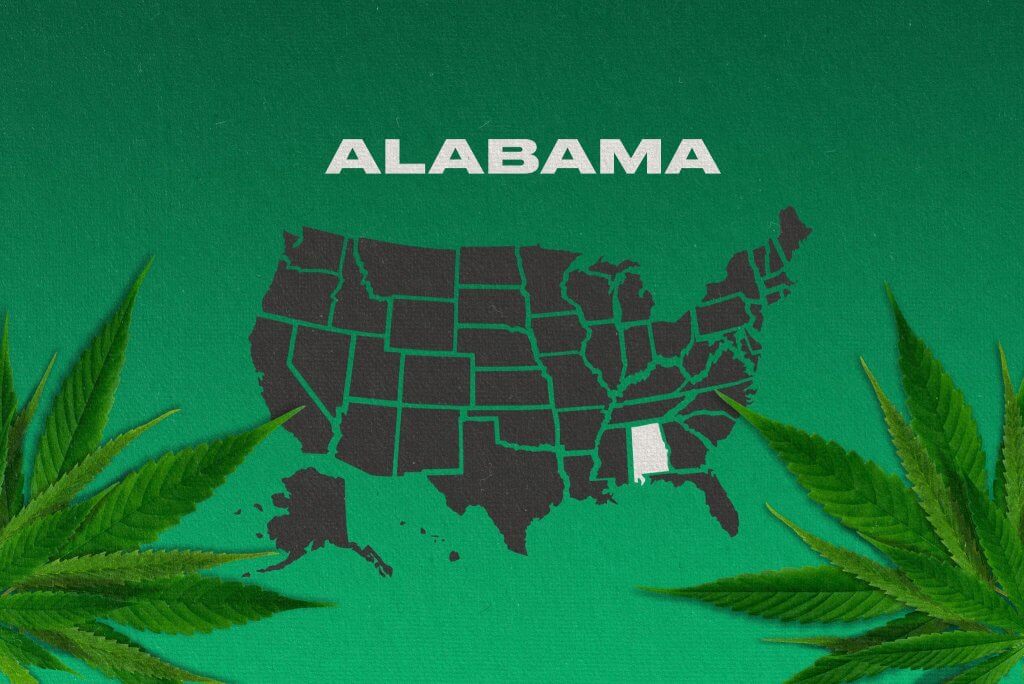 If you’re a consumer of all things ganja and planning a visit to the Heart of Dixie, a good question to ask is, “Is weed legal in Alabama?” You might think that because this state was all “grass” before the early settlers arrived, that Alabama pot laws would be more favorable.

Unfortunately, legalizing weed in this state has yet to become a reality. On the bright side, medical marijuana is legal in Alabama. However, the laws and regulations are a bit challenging for both patients and doctors.

As we wait for the day when Alabama will legalize weed, let’s have a look at how their current laws impact those who enjoy a bit of grass.

As of the time of writing, Alabama marijuana laws have yet to legalize weed. Although more states are gradually legalizing cannabis, the Yellowhammer State has been slow in following suit.

However, medical marijuana is legal in Alabama, and patients can only use CBD with strict conditions.

If you’re caught with any amount of pot on you for recreational use, you could be fined $6,000 or/and a year in prison. This possession, according to Alabama weed laws, is regarded as a misdemeanor.

Possessing weed for any other reason other than personal use is deemed a felony. The penalty is a fine of $15,000 and more than a year in prison with a maximum of 10 years.

The sale of cannabis of any amount to anyone is seen as a felony. The penalty, as per the Alabama marijuana law, is as follows:

The marijuana laws in Alabama also forbid the trafficking of weed and any cultivation, even for medicinal purposes.

Any infringement of the Alabama weed laws will result in the suspension of your driver’s license for six months.

Is buying cannabis legal in Alabama?

Any buying or selling of weed is illegal in Alabama. If you’re interested in collecting seeds as a souvenir, you can purchase them legally online at a marijuana seed bank.

Once weed is legal in Alabama, you might be able to put those seeds to good use.

Can I grow my own cannabis in Alabama?

Marijuana laws in Alabama, unfortunately, don’t allow any cultivation of cannabis. As no one knows for sure when weed will be legal in Alabama, it can’t do any harm to prepare for the day that you could grow your own pot.

You may not be able to purchase them to cultivate right now, but it’s legal to buy cannabis seeds if you intend to keep them as souvenirs.

When the time comes for you to cultivate your crop legally, you could consider buying autoflower seeds USA. They’re easy to grow and will flower in two to four weeks.

There are strains of seed that will assist with various medical ailments. One in this range that is renowned for assisting with pain is CBD Harlequin Feminized.

Alabama has a medical CBD law where cannabis extracts low in THC but high in CBD can be administered to qualifying patients. To get access, patients must have one of the conditions below, certified by a physician.

The version of the bill passed at the senate level includes anxiety, fibromyalgia, PMS, and menopause. A parent or guardian is responsible for collecting the cannabis of a patient younger than 19 years.

Patients are allowed to have 70 daily doses of cannabis in their possession and may not be refused an organ transplant based on their medicinal weed use. According to Alabama Public Health, they should also take special care as patients might experience some side effects.

The role of physicians

Before a doctor can certify a patient, they need to be authorized by the State Board of Medical Examiners. In addition to this, they must pay a fee of up to $300. Once certified, a medical practitioner also needs to complete a 4-hour course, followed by an exam.

This course can cost up to $500 and needs to be taken every two years. It seems almost easier to legalize weed in Alabama than to follow all these intense requirements.

Only cannabis in the form of suppositories, patches, lozenges, pills, and oils are allowed. Patients are not eligible to recover any medical weed expenses from health insurance.

Employees can still be tested for drugs and be forbidden to use them by their employers. The Department of Transportation regularly does this testing on their safety-sensitive employees as they’re not allowed to use marijuana.

Although there are many recreational activities available in the Yellowhammer State, the consumption of weed isn’t legal in Alabama, and no one knows for sure when this will be.

When the legalization of marijuana in Alabama does eventually happen, many people will undoubtedly celebrate and explore the various benefits weed has. This could include the purchase of feminized seeds, one of the best strains for home cultivation, with one of their wellness seeds being CBD White Widow feminized.

When will marijuana be legal in Alabama?

It’s quite difficult to confirm when weed will be legal in Alabama. Like so many other states, the Heart of Dixie lawmakers are taking their time in pursuing this matter.

Residents, in the meantime, are left in limbo as they aren’t allowed to petition for weed legalization in Alabama. Let’s look at the current medical and recreational use rules.

Alabama has a rich culture in both country music and bluegrass. Other states that also share their love for country music are Colorado and California.

Unfortunately, Alabama doesn’t share the same legal view of marijuana as Colorado and California as they are states where weed is legal. Tennessee, also well known for country music, is on par with the Yellowhammer State and is awaiting full legalization of cannabis.

Regular updates regarding changes in any of the US states where weed is legal can be found at Homegrown Cannabis Co.