Is Weed Legal In Indiana? 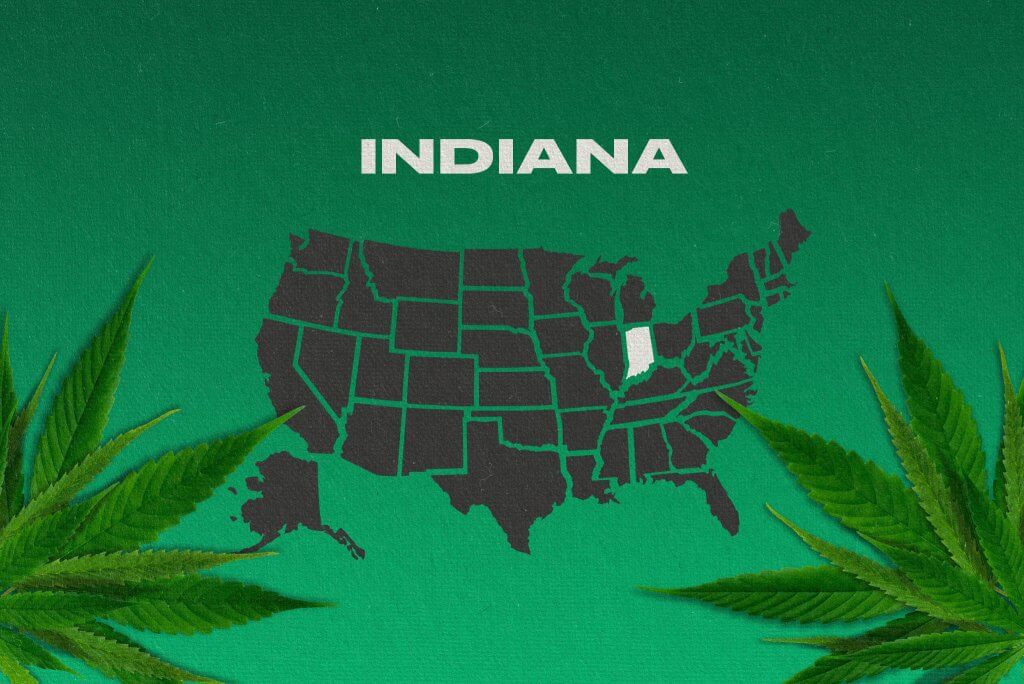 Before you light up your favorite strain in the Hoosier state, you need to ask the question, “Is weed legal in Indiana?”

Understanding the legality surrounding cannabis in the US is vital. There are over fifteen states where you can purchase marijuana without a hitch, but others aren’t as straightforward.

In order to keep you in the loop, we take a look at Indiana’s marijuana laws for both recreational and medicinal users. You’ll also discover whether the state permits the cultivation of this miracle herb.

Is weed legal in Indiana? Unfortunately not. At the time of writing this, the Hoosier state continues to push archaic legislation, making it impossible for its residents to enjoy cannabis. It’s incredibly strict on the matter, treating those in possession with great hostility.

There’s a complete lack of interest in weed legalization in Indiana. This also makes it one of fourteen remaining states that refuse to come to its senses. While some have tried to correct the marijuana laws in Indiana, their efforts fall on deaf ears.

Is recreational weed legal in Indiana? Definitely not. Smoking bud with your friends will lead to some heavy jail time and a fine. While neighboring states like Michigan and Illinois reap the economic benefits of cannabis, Indiana continues to turn a blind eye.

What’s even more astounding is the state’s stance on medical cannabis. Currently, Indiana marijuana laws in 2021 view those who treat themselves with weed as criminals. There are whispers that this could change in the near future, but nothing solid as yet.

Is buying cannabis legal in Indiana?

Since weed isn’t legal in Indiana, purchasing it in any amount will bring down the full wrath of the law. There are no state-run dispensaries or seed banks, so getting your hands on cannabis is next to impossible.

According to the current marijuana laws in Indiana, the severity of your charges depends on whether you have any prior convictions. The state views the possession of cannabis as a class B misdemeanor, awarding a fine of $1,000 and up to 180 days in jail.

If you’re caught a second time, the charges severely increase. You’ll face a fine of $5,000 and a year in prison for possession under an ounce. Anything over this amount will land you in the slammer for two and a half years. Plus, you’ll receive a $10,000 fine.

What makes Indiana’s marijuana laws even worse is the clear discrimination towards African Americans. Police are three times more likely to arrest an individual for possessing cannabis if they aren’t white. This creates a snowball effect, destroying many innocent lives.

Indiana’s medical marijuana laws are non-existent, meaning you can expect similar charges for buying medicinal cannabis. People still purchase weed in the Hoosier state, putting themselves at risk for a naturally growing herb.

Can I grow my own cannabis in Indiana?

At this point, growing marijuana isn’t legalized in Indiana. Any enthusiastic cultivators in the state will need to hold out a little longer before buying cannabis seeds. It views growers as dangerous as those who sell drugs.

It’s no secret that a single cannabis plant can yield up to 17 ounces of marijuana. While that may excite avid growers, the potential ramifications are steep. You stand to receive a $10,000 fine and a prison sentence of up to six years.

While you wait for Indiana to legalize weed, you can start planning your dream crop. At Homegrown Cannabis Co., we don’t encourage breaking the law, even if we don’t agree with it. On the other hand, there’s nothing stopping you from researching the best methods to grow high THC seeds.

Is cannabis consumption legal in Indiana?

Since weed isn’t legal in Indiana, some might think there are alternative options. Sadly, this isn’t the case. The state regards anything to do with cannabis as illegal. That means you can’t consume THC or CBD in any form.

It’s even illegal to manufacture or buy paraphernalia related to cannabis. Whether it’s a beautifully crafted glass pipe or tools for harvesting marijuana, you’ll receive a $500 fine. A judge can also hand down a 60-day jail sentence.

Indiana’s medical marijuana laws, or lack thereof, also mean that ingesting cannabis oils or using creams is illegal. Using any of these products will wind you up in prison, along with a criminal record.

When will marijuana be legal in Indiana?

With so much uncertainty surrounding cannabis in the state, it begs the question, “when will weed be legal in Indiana?”

The 2021 legislative period saw the introduction of several bills relating to cannabis reform. All but one managed to pass through a committee and now waits for the governor’s signature.

The other bills, which would see cannabis decriminalized, didn’t get as much as a hearing. It’s fair to say that while there’s some movement in a positive direction, it faces stubborn lawmakers who oppose weed legalization in Indiana.

Cannabis users beware; you’re in for a scare!

So, is weed legal in Indiana? The answer is a resounding no. Not only is the state against decriminalizing recreational marijuana, but it’s also too stubborn to implement a medicinal program.

It’s difficult to keep up with the constant legislative changes throughout the US, but it’s vital to understand your rights. Recreational cannabis is now legal in fifteen states, including California, Maine, and Massachusetts.

The number of U.S. states changing their cannabis laws is on the rise. To stay in the loop and out of a jail cell, make sure to keep up with the latest news and developments here at Homegrown Cannabis Co.