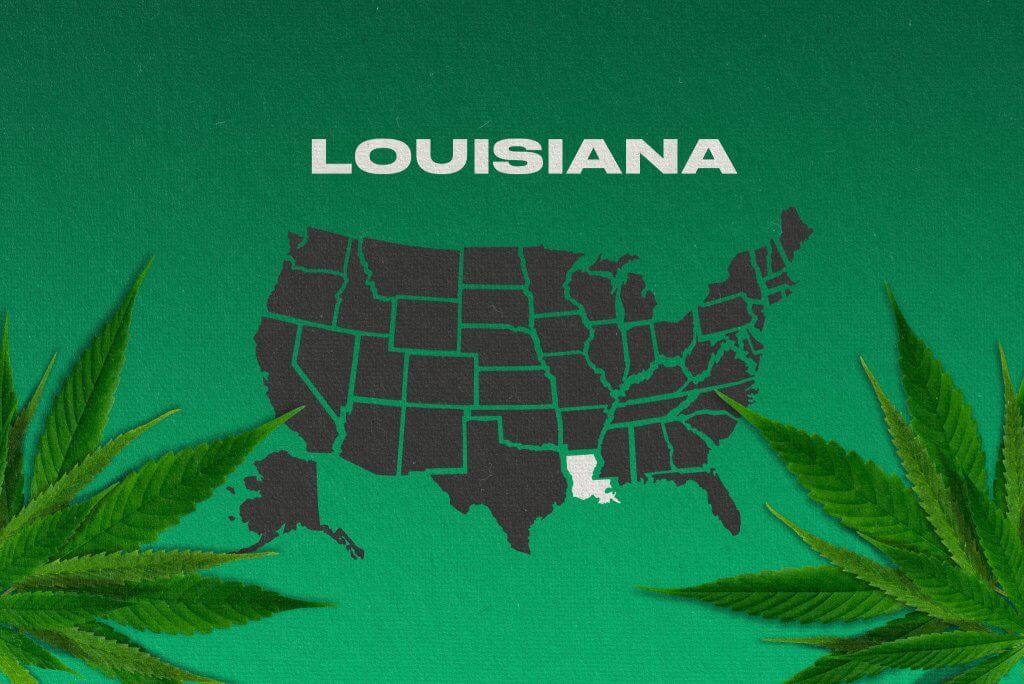 While recreational use remains prohibited, it’s among the first southern states to embrace change on such a large scale as we’ve seen in 2021.

The ‘Holland in America’ can thank its Amsterdam for the advances on the horizon. New Orleans, famous for its progressive attitudes, has already started bringing in change, and it could turn things around for the entire region.

Let’s explore the current marijuana laws in Louisiana and discuss what the future might bring.

Louisiana recreational marijuana is yet to become a reality. At the present time, the state classifies it as an illegal hallucinogenic substance, punishing possession with monetary fines and jail time.

Louisiana cannabis penalties aren’t that severe for small quantities of hash, flower, or concentrate. Generally speaking, they grow harsher with greater amounts and for growing and selling.

There’s been some local decriminalization in big cities. Weed isn’t legal in New Orleans, Shreveport, and Baton Rouge, but these areas impose only civil fines as possession consequences.

Medical marijuana in Louisiana is allowed, but the program only recently started giving leeway for doctors and patients. Here’s its long, turbulent history in a nutshell:

Is buying cannabis legal in Louisiana?

Until Louisiana pot laws change, there’s no way to obtain recreational cannabis legally in the state. Patients with a prescription can purchase from licensed pharmacies.

Flower and other smoke-based ingestion methods aren’t available. The Board of Pharmacy permits:

The only form of inhalation allowed is through metered-dose vaporizers. You can purchase up to a one-month dose at a time.

Not even commercial growers, let alone patients, can get high CBD weed seeds and grow their own. Only two state-licensed cultivators and nine locations dispense the products. As a result, treatment is still tricky, if not impossible.

Note: There is no reciprocity with other US regions. Only state residents may acquire medical marijuana in Louisiana.

Can I grow my own cannabis in Louisiana?

Home cultivation is illegal under Louisiana weed laws in all cases. You’re 100% free to browse our marijuana seed bank and purchase seeds that spark your interest, as long as you don’t germinate them. The possession of souvenir seeds is entirely legal.

Pro tip: Get tightly-sealed, quality seed packs. That way, you can count on them once marijuana laws in Louisiana inevitably change, and you’re allowed to cultivate a weed garden of your own.

Is cannabis consumption legal in Louisiana?

If you’re wondering is weed legal in Louisiana in any shape or form, we’ve got bad news. At the moment, you can’t own any amount of personal use cannabis without legal consequences. Patients may hold up to one month’s supply, as determined by the physician, of non-smokable weed.

When will marijuana be legal in Louisiana?

Change to Louisiana pot laws is surely approaching. In May this year, a bill by Gov. Glover that would greatly reduce the penalties for recreational marijuana passed the house. If it goes through the Senate, it’ll:

Another bill by state representative Nelson is even more optimistic and ambitious. It seeks to get marijuana legalized in Louisiana for everybody over 21. It would:

Public opinion is massively on the side of widespread cannabis reform. People certainly want to consume weed, buy cannabis seeds, and see the medical side of the program expand.

Lawmakers report receiving only positive feedback from constituents after suggesting legalization. Even many state Republicans, notorious for opposing these measures, are starting to show support.

In the end, we’ll believe the words of the Baton Rouge pollster John Couvillion commenting on the Louisiana marijuana law. He believes that the generation who followed the ‘just say no’ campaign is getting replaced with younger, more progressive populations.

Is weed legal in Louisiana? We can’t emphasize this enough: no, and there’s still a long way to go. But the voices of these people are making it possible.

This year is becoming sensational for the US’s 420 laws. It’s essential to stay up-to-date with the ever-changing legislation, but understanding where weed is legal at what point can be challenging.

Recreational use is now legal in more than 15 U.S. states, including Arizona, Colorado, and California. More are likely to change their laws in the coming months.

You can find out all the latest news and developments here at Homegrown Cannabis Co.