Is Weed Legal in North Carolina? 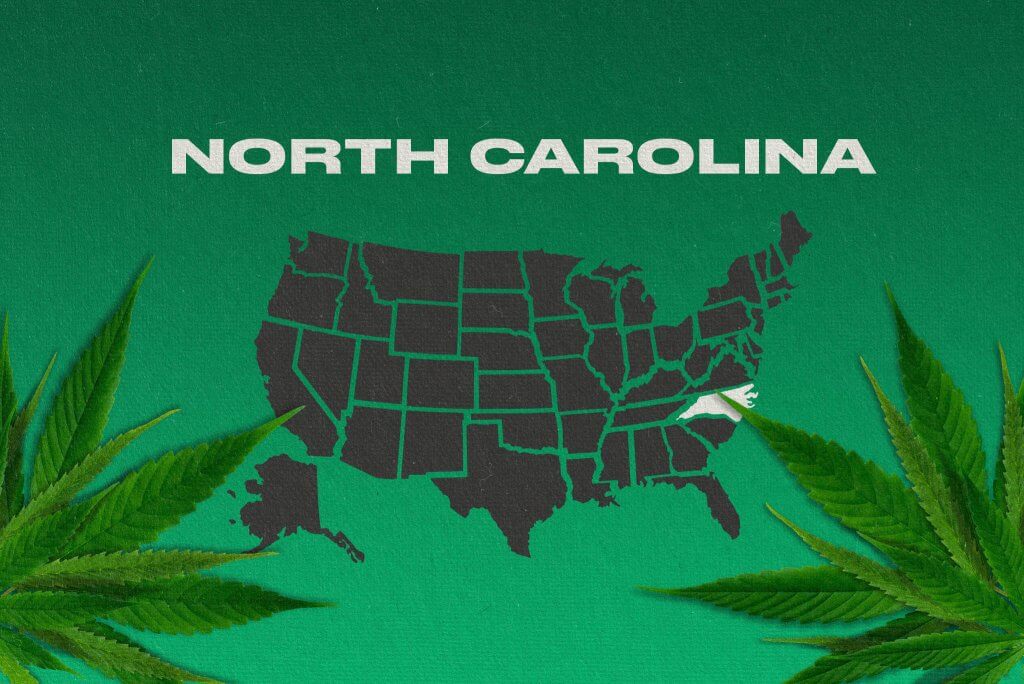 As the western world wakes up to the incredible benefits of cannabis, more and more US states have begun to relook at their laws surrounding this miracle herb. Unfortunately, there are many areas where possession of marijuana can still lead to fines and even jail time. So you must be wondering: “is weed legal in North Carolina?”.

Keep reading this article as we take a look at this question and what regulations are in place for medical marijuana use.

The North Carolina marijuana laws are far less progressive than other states, resembling an ostrich burying its head in the sand.

Below is a look at the current laws for both recreational and medical cannabis.

At the time of writing this article, the Tar Heel state views the recreational use of cannabis as illegal.

According to the North Carolina marijuana laws in 2021, possessing 0.5 ounces of weed or less is a Class C misdemeanor. This means you’ll receive a fine of up to $200.

Anything larger than half an ounce of marijuana will carry more severe consequences. This is the same for people caught that have already committed a similar offense in the past.

For the time being, growing a personal batch of cannabis seeds, regardless of how you feel about the subject, is out of the question.

This law allows for the legal consumption of low THC and CBD oil extracts for those suffering from this disorder.

The state also increased the number of qualified physicians in this field and removed the requirement that only children could receive this treatment.

The marijuana legal status in North Carolina allows for its use in medical treatment. Yet, there are no state-regulated stores or any other state-approved methods available.

Patients and their caregivers still need to purchase cannabis oil in a state where this service is offered.

Perhaps an oversight, especially when cocaine ranks as a Schedule 2.

Nevertheless, buying weed remains illegal. Possessing more than 0.5 ounces of cannabis carries up to a 45-day jail term and a $1,000 fine.

Can I grow my own cannabis in North Carolina?

While many states in the US allow you to buy weed seeds and cultivate your very own herb legally, North Carolina isn’t one of them.

Growing your own weed can land you in the slammer just as much as buying it. Due to current laws, having more than 10 pounds of marijuana classifies you as having an intent to sell. Yields like this are more than possible when you put effort into your harvest, so avid growers will also need to weather the storm for now.

The punishment for this carries a minimum 25-month sentence and a $5,000 fine.

The other alternative is to relocate to a state that caters to your interests in growing cannabis. That way, you can pursue your interests without the worry of the law on your back.

As it stands, only patients diagnosed with epilepsy by a registered doctor can consume marijuana legally in North Carolina, albeit oil extract. If you don’t suffer from this terrible disorder, then ingesting any form of cannabis is illegal.

According to NORML (NORML, N.d), if found under the influence of marijuana while driving, you’d receive a $4,000 fine. There’s also a sentence of up to 24 months imprisonment, depending on your penalty level.

When will marijuana be legal in North Carolina?

“So when does marijuana become legal for recreational use in North Carolina?” you ask. Currently, there’s no immediate forecast for purple haze on the horizon.

Yet, there’s a sense of hope for the future, especially when you look at a map (DISA, N.d) of the number of US states changing the way they see cannabis and the hemp industry.

North Caroline has seen an increase in licensed hemp growers over the years. However, attempts to pass a better program have fallen on deaf ears—the most recent example being the anticipated North Carolina Farm Act.

The bill sought to assist the current hemp farmers and encourage the industry to grow. Instead, when the bill passed, it was devoid of all hemp-related laws (JDSupra, 2020).

How to become a caregiver in North Carolina?

To legally possess cannabis oil in North Carolina, you’ll need to be either a parent, custodian, or guardian of a person diagnosed with intractable epilepsy.

You’ll need to prove this by providing the relevant documentation to the Department of Health and Human Services (DHHS).

Once a registered caregiver, you must keep your DHHS authorization letter on your person when in possession of cannabis oil. You’ll also need to carry a certification for the CBD extract that you hold, proving that it meets the state’s laws.

Under no circumstances does the status of caregiver give you the legal right to cultivate high CBD weed seeds in North Carolina.

As we’ve pointed out in this article, if found growing marijuana in this state, you could face a hefty fine and even jail time.

It’s fair to say that while there’s potential for a budding cannabis industry in North Carolina, there’s no sign of any significant change to the current legislation at this time.

The law remains strict, and those found in possession of weed face unproportionate charges even with its misdemeanor status.

« Is Weed Legal in Missouri?
Should I Use Hydrogen Peroxide to Treat Cannabis Problems? »