Is Weed Legal in North Dakota? 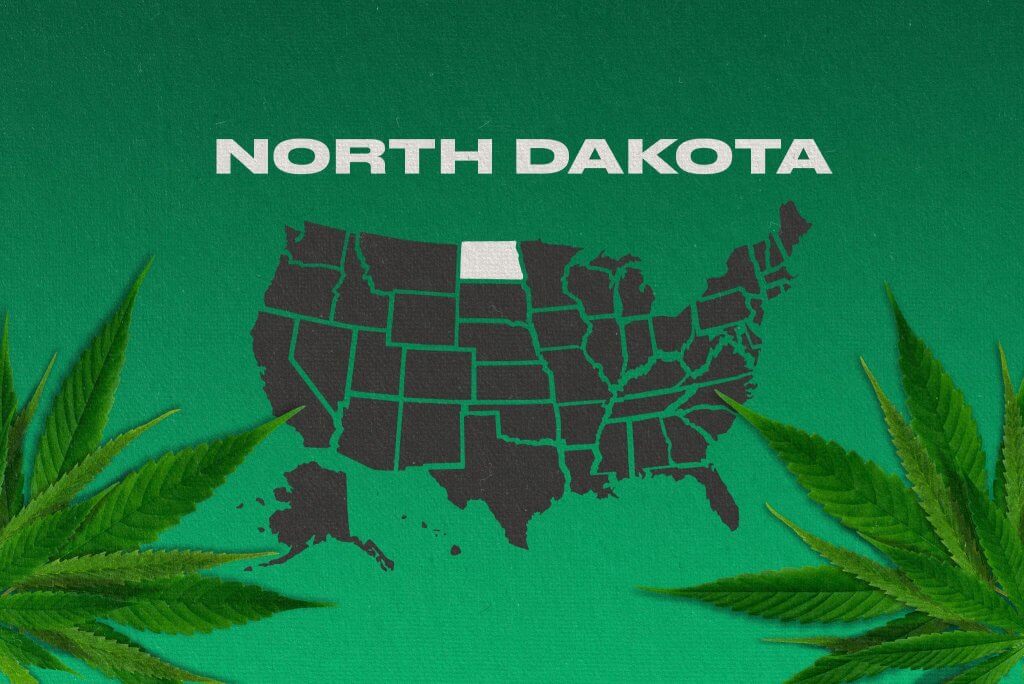 Did you know that most of the pasta in the United States is made from durum wheat from North Dakota? You know that the perfect munchies food is a huge bowl of mac n’ cheese or lasagne. Is weed legal in North Dakota, and can you indulge in these carbs while high?

Let’s boil down the North Dakota weed laws to determine if you can legally possess, consume, buy, and grow marijuana in the Peace Garden State.

In the 2016 presidential elections, 63.5% of voters passed the North Dakota Compassionate Care Act, or Measure 5. The North Dakota Legislative Assembly took two years after the vote to create the regulations for medical cannabis.

Per North Dakota weed laws, when you become a North Dakota medical cannabis patient, you can possess weed-infused tinctures, patches, capsules, or topicals. The legal maximum amount of THC a patient can hold from cannabis-infused products in 30 days is 0.7 ounces.

Patients can buy up to 3 ounces of dry herb if they have specific conditions and a doctor’s recommendation to permit smoking.

In 2019, Governor Doug Burgum signed House Bill 1417, allowing those with debilitating cancer to possess up to 6 ounces of North Dakota medical cannabis to help relieve symptoms.

In 2019, Governor Doug Burgum passed House Bill 1050, decriminalizing a small amount of marijuana. Per North Dakota weed laws, the penalties for possessing cannabis for personal use are as follows.

North Dakota residents tried to vote to legalize marijuana on the 2020 presidential election ballot with the North Dakota Freedom of Cannabis Act. They needed a minimum of 27,000 signatures but fell short by 3,000, so it didn’t make it on the ballot.

In 2021, lawmakers proposed legislation to vote on legalizing North Dakota recreational marijuana on the 2022 ballots. The proposal passed the House but came up short in the Senate.

North Dakota medical cannabis patients can buy capsules, concentrates, tinctures, patches, and topicals with a total of 0.07 ounces of THC in 30 days.

Per North Dakota marijuana laws, registered patients can buy and possess up to 3 ounces of dry herb if their doctor recommends it.

When consumed, you’ll be in a state of relaxation and happiness. The harvest from these high CBD weed seeds is perfect for relieving anxiety, depression, stress, arthritis, seizures, and cancer.

North Dakota medical cannabis purchases are subjected to the state’s sales tax but no additional taxes.

Although recreational weed isn’t legal in North Dakota, you can still buy ungerminated cannabis seeds as collector items or souvenirs. In this state, the marijuana seeds aren’t considered a drug and are legal to own.

Per the weed laws, you can purchase high-quality collectible marijuana seeds at Homegrown Cannabis Co.

Sour Diesel feminized seeds contain 22% THC and 0.7% CBD levels. This strain is mostly Sativa and is known for its notorious diesel fragrance.

The herb from these high THC seeds is popular because of its energetic, happy buzz. It’s a well-balanced strain, so you’ll also feel body relaxation.

Can I grow my own cannabis in North Dakota?

Neither medical patients nor recreational users can cultivate their own marijuana per North Dakota weed laws. If an officer catches you growing marijuana seeds, you’ll be charged for possession based on the weight of the plants.

Remember, you can buy ungerminated weed seeds online; just don’t grow them to stay out of legal trouble.

Under North Dakota weed laws, registered medical marijuana patients must consume on private property. It’s illegal to consume in public or at your workplace.

The same regulations as tobacco smoking restrict smoking North Dakota medical marijuana in public. Vaping or smoking weed close enough to a minor that they can inhale your secondhand smoke is illegal.

Consuming North Dakota recreational weed is illegal in private or in public.

When will marijuana be legal in North Dakota?

We can’t predict the future, so we can’t determine when the North Dakota weed laws will change. Until they do, only use North Dakota medical marijuana if you qualify.

Deciphering the states where weed is legal can be difficult, so it’s vital to stay updated as legislation changes. Recreational use is now legal in more than 18 US states, including South Dakota, Montana, California, and Colorado, with more likely to change their laws.