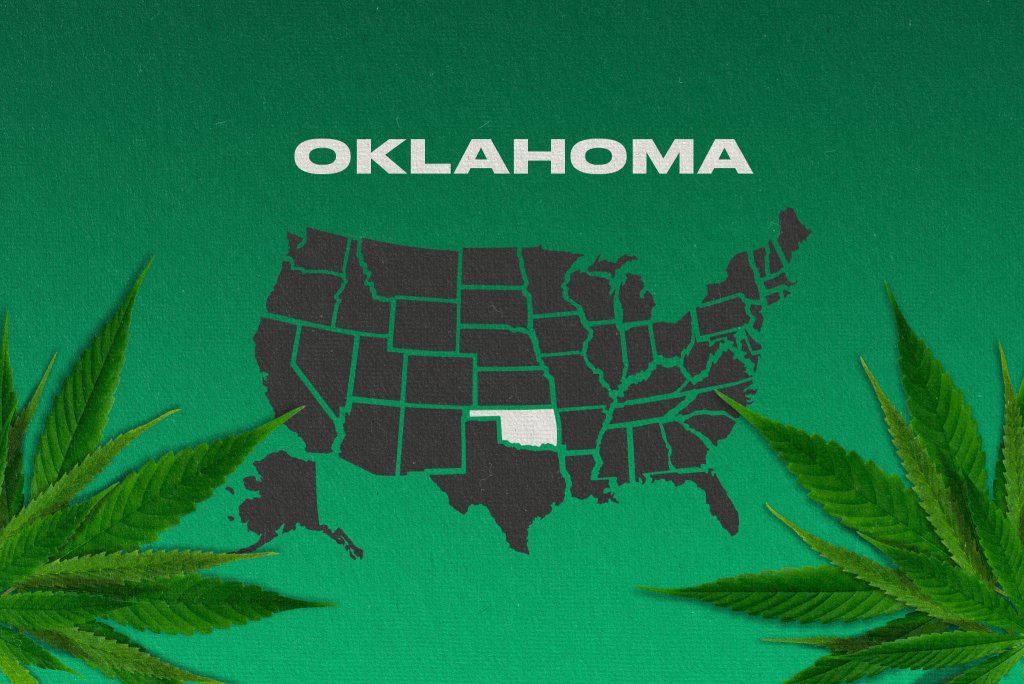 Is weed legal in Oklahoma? This post discusses the complexities of this question and provides details about what is and isn’t permitted in the state of cowboy culture and oil wells.

States across the US are relaxing marijuana laws by either decriminalization or legalization. Many weed lovers are curious about where Oklahoma marijuana laws fit in on the spectrum.

In some regions, it’s fully illegal, or only medical cannabis is permitted. Others allow adult consumption for recreational use.

In Oklahoma, weed isn’t legal, but the state permits medical marijuana as of 2018. In 2020, cannabis enthusiasts initiated several petitions for legalizing the substance for adult recreational use.

The initiatives failed largely due to social distancing regulations introduced during the pandemic. Officials withdrew the petitions as it was difficult to obtain signatures.

Many stoners who want to see marijuana legal in Oklahoma also wish for the state to allow them to cultivate it. Cannabis enthusiasts who had hopes of success for the 2020 petitions began researching the topic on sites like Homegrown Cannabis Co.

Unfortunately, those who bought cannabis seeds will have to wait until marijuana laws in Oklahoma are more favorable. The only way to get legal weed in Oklahoma is if you have a medical condition.

Oklahoma marijuana laws 2021 are strict. The charges for possessing and cultivating recreational weed are severe.

You can get arrested for having trace amounts of weed on you, and even cannabis accessories like bongs can land you in trouble.

If you’re caught with weed, marijuana laws in Oklahoma recognize this as a misdemeanor. You could spend up to a year in prison or be liable to a fine of a maximum of $1000.

Growers face even heavier charges. Cultivating weed is a felony, and if you’re found guilty, the fine can be as high as $50 000. The crime is also punishable with a minimum prison sentence of 2 years.

The most severe marijuana charge is for trafficking the substance. This refers to anyone who brings it into the state or distributes it.

Is buying cannabis legal in Oklahoma?

Only those who have a qualifying condition can legally buy medical marijuana in Oklahoma. The Oklahoma Medical Marijuana Authority (OMMA) administers the rules regarding the state’s medicinal cannabis program.

Patients can also buy weed seeds and cultivate their yield if they have a state-issued medical marijuana card. They can purchase the substance from a state-licensed dispensary or select a caregiver to do this on their behalf.

There aren’t any limits for buying medical marijuana in Oklahoma, but there are restrictions on how much patients can legally possess.

Patients can carry up to three ounces of weed and have a maximum of eight ounces at home. Cannabis concentrates are limited to one ounce, and edible products shouldn’t exceed 72 ounces.

Can I grow my own cannabis in Oklahoma?

You may be wondering if growing medical marijuana is legal in Oklahoma. The state does allow those with qualifying conditions to grow their weed at home.

Individuals who opt to grow their own can buy cannabis seeds and legally have six plants and six seedlings. There are other rules for cultivating weed as well. These include:

Is cannabis consumption legal in Oklahoma?

A common question among stoners is, can you smoke marijuana in Oklahoma? Those who have approved medical conditions aren’t restricted regarding consumption methods.

Unlike most other states, Oklahoma doesn’t restrict medical cannabis to specific illnesses. The recommendation is at the discretion of the patient’s doctor. Conditions that commonly get approved are:

If you have one of these conditions, according to Oklahoma marijuana laws, you need to apply for a medical cannabis card.

To apply, you need:

All these prerequisites need to be in digital format.

When will marijuana be legal in Oklahoma?

There’s no clear indication of when cannabis will be legal for recreational use. Oklahoma marijuana laws still consider weed use a crime.

The tax revenue earned from medical marijuana in Oklahoma is substantial, which could be a catalyst for permitting recreational use. Advocates for weed legalization are currently drafting a bill.

If successful, this would be the first step to legal adult consumption of marijuana. Nobody is certain of when officials will propose the bill.

Oklahoma currently has a relaxed medical marijuana program. It’s a tremendous success since its inception in 2018 has led officials to reconsider some of Oklahoma’s marijuana laws.

Many in the state are keen to see it legalized for adult recreational consumption and the regulations on possession and cultivation relaxed. In the meantime, cannabis enthusiasts can wait for petitions and actively get involved in legalization campaigns.

Stoners and potential growers can also read up on the subject and enhance their knowledge on cultivation so that when laws become favorable, they’ve got a head start.