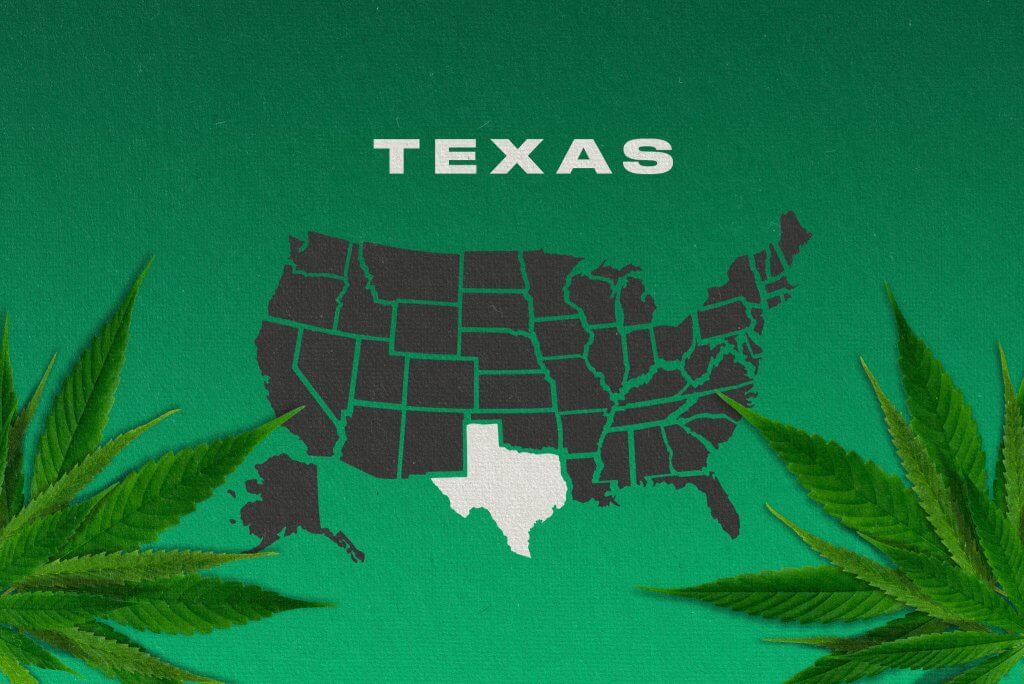 Is weed legal in Texas? Unfortunately, the answer is still no.

We know it can be a bit confusing at times as the laws vary (DISA, 2021) so much between states. The good news is that things are changing rapidly, and lawmakers could very well legalize it soon.

The state prohibits the recreational use of cannabis, but medical marijuana laws in Texas now include a few more illnesses.

It’s interesting to note that although weed is illegal, hemp, which comes from the same plant, is completely legal in Texas.

There’s no doubt that the marijuana laws in Texas are conservative compared to many other states. Read on to see how the regulations affect the use of this beneficial herb.

The medicinal use of cannabis is legal to a select few in Texas. As of January 2021, only 3519 Texans were registered to use medical marijuana. Statistics like this are why this state is known to have one of the country’s most restrictive programs.

Lawmakers are currently looking to improve the Compassionate Use Program (CUP) by extending eligibility to resemble other states’ laws. Based on current laws, about two million people are eligible.

The CUP states allow the medicinal use of low-THC cannabis. This is how the Texas Occupations Code defines it:

“The plant Cannabis sativa L., and any part of that plant or any compound, manufacture, salt, derivative, mixture, preparation, resin, or oil of that plant that contains not more than 0.5 percent by weight of tetrahydrocannabinols.”

The following conditions are covered in the Texas Compassionate-Use Program:

As of January 2021, Texas is one of 19 states where you can still go to jail for weed possession.

State and federal law both regulate the use of marijuana for recreational and medicinal purposes. Due to weed still being classified as a Schedule I substance being in possession or cultivating it in the state of Texas is a punishable offense.

Let’s take a look at what the punishments are:

The state doesn’t allow the possession of any marijuana paraphernalia either. Including all items used to grow, harvest, process, sell, store, or use the drug. Having any of these items is seen as a Class C misdemeanor which includes fines of up to $500.

Early March of 2021, House Bill 3248 (Texas Legislature online, 2021) was filed by state Rep. Jessica Gonzalez (D-104). If this bill passes, lawmakers will legalize the recreational use of marijuana.

“In a recent study, 54 percent of Texans supported the legalization of recreational cannabis use.” – Jessica Gonzalez

Is buying cannabis legal in Texas?

At the time of writing, buying weed in Texas is still illegal. The DEA classes marijuana as a schedule 1 drug. This is right up there with heroin, LSD, and ecstasy. These drugs have a high potential for abuse with no currently accepted medical use.

Can I grow my own cannabis in Texas?

Many U.S. states have different weed cultivation laws. Texas isn’t one of those. People caught growing weed in this state will be prosecuted for possession.

Remember those stringent penalties we mentioned earlier? If they catch you cultivating cannabis, you can expect between 180 days and life imprisonment and fines ranging between $2,000 and $50,000.

Is cannabis consumption legal in Texas?

No. The consumption of cannabis is illegal in Texas unless you are among the few people who managed to get on the approved list for medicinal marijuana. As mentioned above, the penalties for possession of weed are no laughing matter, which could even lead to your license suspension.

A few of the state’s municipalities have agreed to reforms that ease up the penalties if caught with less than two grams.

In the state of Texas, it’s illegal to drive while under the influence of a controlled substance.

Drivers suspected to be under the influence of marijuana have the right to refuse a chemical test. The court can use this against you. Texans are very serious about safety on their roads.

The penalties start at a minimum of six days in court if you’ve harmed nobody. It can be as severe as five years imprisonment and up to $100,000 in fines if you hurt a policeman.

When will marijuana be legal in Texas?

The polls are in, and marijuana has been turning heads in this state. Recent polling suggests that 60% of Texans favor legalizing weed for recreational purposes, with a further 28% in favor of medicinal use. This is a whopping 20 point increase in the past 11 years.

Texas’s state legislature only meets in odd-numbered years, which means Texas marijuana laws 2021 might see a turn for the better. Before the most recent session began, over a dozen bills were pre-filed.

Everyone’s asking when marijuana will be legal in Texas. We can’t say for sure, but the possibility of tax revenue from weed sales could be an excellent incentive for lawmakers.

With the momentum behind legalization and decriminalization, it’s only a matter of time. You can’t do it just yet, but as soon as those laws turn in our favor, you can buy your marijuana seeds directly from us.

Whether you’re after Gorilla Glue $4 seeds or high CBD strains, our selection is vast.

If you’re still asking, “Is weed legal in Texas now?”, the answer is no. It’s best to stay on the right side of the law to keep out of jail and save yourself a pretty penny in fines.