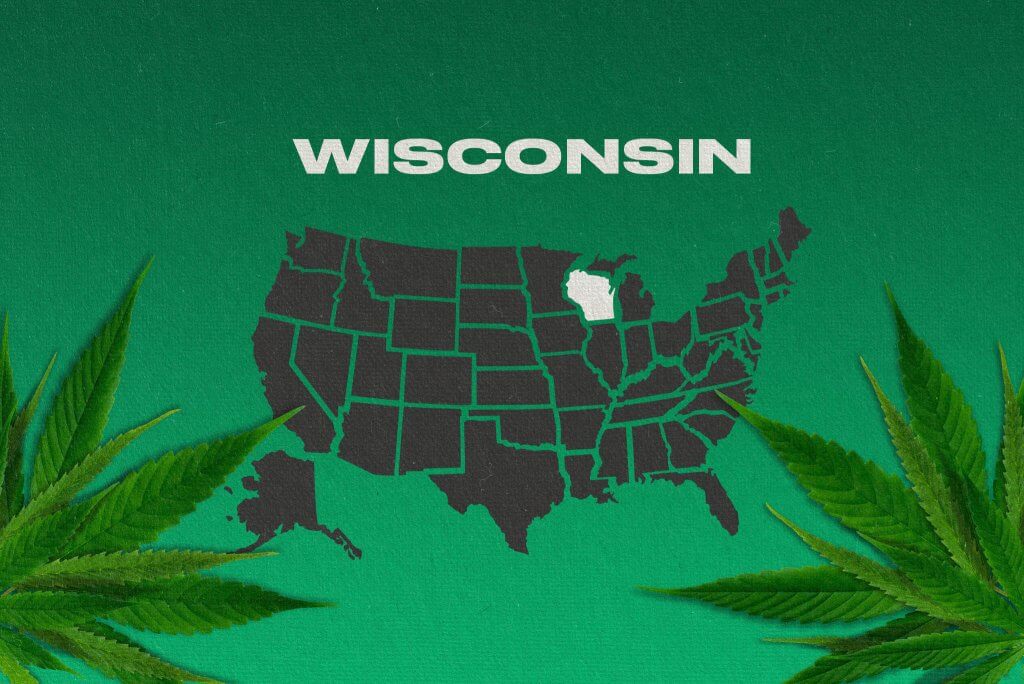 Is weed legal in Wisconsin? Unfortunately not, but think about this fantasy of ours.

The state is a leader in dairy production in America, making it the ideal spot for a serious case of the munchies. Sounds fantastic, doesn’t it? We’re happy to tell you that it might come true.

Despite the overwhelming support for legalization and this potential for marketing brilliance, Dairyland remains strong in its attitudes against cannabis. Our marijuana seed bank would be happy to bless Wisconsinites with some mind-blowing pot.

But for now, the best we can do is keep you informed. Let’s jump into the overview of Wisconsin cannabis laws now and explore the possible future scenarios.

There’s little positive to say about the cannabis situation in Wisconsin at the moment. The region is pretty strict and conservative when it comes to this issue, with very slight exceptions for medical use.

Is recreational weed legal in Wisconsin? Not at all. It’s regarded as a criminal act with harsh punishments for transgressions. Monetary penalties and time behind bars await those caught with cannabis.

Note: There’s a conditional release stipulation for first-time prosecutions that lets people face probation rather than a trial. Successful probation wouldn’t reflect on the criminal record.

What about Wisconsin medical marijuana laws, then? They’re both restrictive and vague. High-CBD, low-THC oil is available to patients with epilepsy, seizure disorders, and other non-disclosed conditions regulated by the Controlled Substances Board (CSB).

The strictness of the laws isn’t in line with the democratic will of the people. Polls show that most residents support the idea of regulating the industry — we’ll get to that soon.

Is buying cannabis legal in Wisconsin?

No dispensaries in the state can exist without a massive change in the Wisconsin marijuana law. Delivery services of flowers, concentrates, and paraphernalia also count as illegal. However, no law prohibits buying weed seeds as memorabilia.

Qualified patients can only access CSB-approved pharmacies. In that case, you’ll need a physician’s recommendation to acquire CBD oil and a confirmation that it has zero intoxicating effects.

WI weed laws for patients somewhat expand coverage beyond seizure disorders but remain unsettled on the exact medical conditions under its purview. It’s pretty much at the doctor’s discretion whether to prescribe CBD.

Can I grow my own cannabis in Wisconsin?

You’re 100% free to browse our selection of cannabis seeds for sale. Start building a neat little collection while you wait for Wisconsin weed laws to change, but don’t germinate.

Planting marijuana gets you in trouble which includes considerable financial consequences and jail time, no matter the amount.

The only exemption under WI marijuana laws is the Hemp Research Program. Any amounts of THC over 0.3% require the immediate destruction of the cannabis plant in question. It’s also possible to apply for the federal-level DEA-led medical marijuana research.

If you’re not a researcher or a commercial hemp producer, the weed laws in Wisconsin leave no breathing room for growing.

Is cannabis consumption legal in Wisconsin?

Pot isn’t legal in Wisconsin, and the possession of any marijuana product (without a doctor’s note) counts as illicit.

Wisconsin laws and penalties regarding cannabis grow in severity with higher amounts and every subsequent offense.

Where you’re caught could also intensify your penalty. Cannabis consumption within 1000 feet of the following locations adds 100 hours of court-mandated community service to the sentence:

Since Wisconsin legal marijuana doesn’t exist, it’s against the law to consume it by smoking, vaping, eating, or applying topicals. The repercussions don’t change with the consumption method.

When will marijuana be legal in Wisconsin?

State polls and referendums are non-binding, but they set the stage for discussions. This time, they’re opening the doors for talks about Wisconsin legalizing weed.

This year brought about more change for the better. Gov. Tony Evers proposed a state budget change this April to include adult-use recreational and medical marijuana provisions.

Evers and other administration members encouraged constituents to pressure Republicans and stop the block on cannabis reform.

One official said that while it’s a stretch to be optimistic, there’s a chance to keep building on the momentum of local decriminalization. Another noted that Republicans’ tentative support for medical marijuana could be another path forward.

The current proposal by Evers seeks to allow adults over 21 and qualifying patients to purchase, possess, and consume cannabis in doses of up to two ounces (quarter-ounce for visitors).

Getting weed legalized in Wisconsin would also allow residents to cultivate up to six cannabis plants.

It’s high time for a change

The fact that this state sits surrounded by progressive neighbors makes it viable to hope for development. Is weed legal in Wisconsin? No. Will it become legal soon? It certainly seems that way.

It’s a year of radical change for cannabis country-wide, and staying up-to-date with legislation is key.

It can be challenging to keep track of the states where weed gets a thumbs up. Recreational use is now legal in over 15 U.S. states, including Washington, New York, and Vermont, with more likely to follow suit in the coming months.

You can learn all the latest news and developments here at Homegrown Cannabis Co.