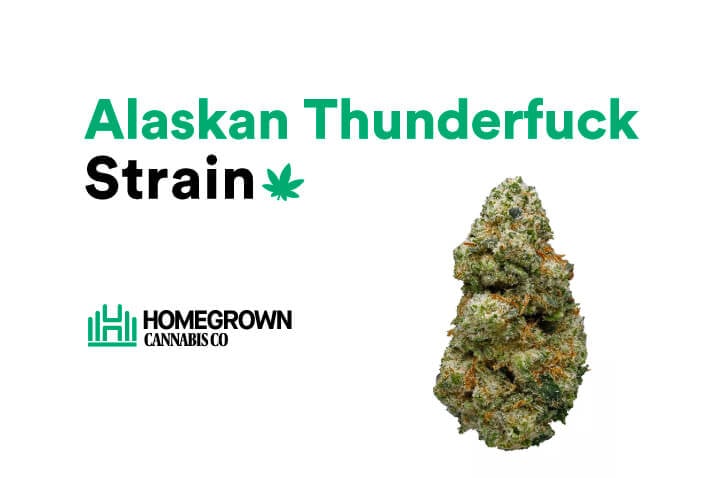 Alaskan Thunderfuck hits you like Thor’s Stormbreaker ax as you relish the energy blasts from its potent toke. This unique strain has been making waves since its release in the 1970s. It’s a superhero in the medicinal and recreational cannabis community.

If you’re looking for a happy, creative cultivar that’s easy to grow and a joy to smoke, you’re in the right place. Read on as we unpack the juicy features of this strain, including its origins, effects, and growing tips.

Alaskan Thunder Fuck is a sought-after, multi-award-winning cultivar that’s won many trophies, including the High Times Medical Cannabis Cup in 2011. It leans towards 60% sativa traits, making it a non-intimidating daytime toke for smokers of all levels.

This moderate-sized plant produces sticky, chunky buds covered in fluffy snow-like trichomes. It’s a must-have if you’re looking for the ideal wake ‘n bake toke. Here are some of this cultivar’s most essential features:

Transform from human to Greek God as you puff on the buds from ATF. Speed through your tasks as fast as lightning with a clear-headed, focused buzz.

This cultivar has a creative streak, stirring your imagination with ideas and intellectual thoughts. The Alaskan Thunder Fuck strain is an excellent partner for artistic projects and a helpful study buddy.

As a sativa, the effects are mainly focused in your head, making your thinking sharper and uplifting your mood. The indica vibrations creep in, massaging tense muscles while you get things done.

The buzz kicks in hard and fast, living up to its name, but the indica influence keeps it from becoming overpowering. People who use cannabis to de-stress typically favor the Alaskan Thunderfuck strain because it has calming qualities without tranquilizing effects.

When the euphoria starts to fade, you feel calm, clear-headed, and uplifted. Beginners should puff slowly, as this is a high THC strain. One too many tokes may result in mild side effects like cottonmouth which you can prevent by staying hydrated.

Inhale the rejuvenating scent of pine, lemon, and menthol, smacking your senses awake and filling your nostrils with a delicious aroma.

The unique terpene profile releases a skunky hint that’s not everyone’s cup of tea, so connoisseurs and experienced smokers tend to appreciate it more.

Alaskan Thunderfuck is straightforward to grow and yields massively but comes with some challenges.

When cultivating outdoors, it does exceptionally well in cooler northern climates because of its heritage. It’s also generous, reaping around 32 oz. per plant. Expect to harvest around late September to early October.

The main outside challenge is odor control, as the ATF strain releases a strong marijuana fragrance closer to flowering. Grow odiferous plants like lavender nearby to dilute the scent.

This cultivar grows beautifully with the correct controlled climate. It needs moderately humid conditions to thrive. The good news is it’s a short plant suitable for any space, but it does require occasional pruning. You can reap up to 16 oz./m² indoors.

The Alaskan strain flowers in 8–9 weeks. Install an odor filter to prevent the scent from wafting through the neighborhood. Use fans or extractors for adequate ventilation to prevent mold.

Head to the Homegrown Forum for more growing tips and to discuss your cultivation attempts with other marijuana enthusiasts. You can also find strain-specific tips and insightful pieces on various cannabis cultivars.

Rumor has it this cultivar used to be a cross between Northern California and a Russian ruderalis. It was blended with Afghani genetics in the 1970s, creating a more generous and potent plant.

Alaskan Thunderfuck strain seeds to buy near you

Are you ready to feel the thunder? You don’t have to face the elements to get your hands on Alaskan Thunderfuck seeds. Homegrown Cannabis Co. has top-shelf marijuana seeds for you to shop conveniently and discreetly:

Here are some of the top picks from our seed bank that share qualities with Alaskan Thunderfuck weed seeds:

Do you still have questions about this cultivar? Check out the Homegrown Diaries for more information about this strain. Here are some common inquiries we get about ATF and our expert answers:

Is the Alaskan Thunderfuck strain indica or sativa?

Alaskan Thunder Fuck originates from sativa seeds, making it a sativa-dominant strain. Expect energizing effects with a relaxing edge that protects you from feeling overwhelmed. It boasts the benefits of both sativa and indica genetics as a hybrid.

What strain is similar to Alaskan Thunderfuck?

Only a few strains come close to the unique buzz of ATF. One of them is Jack Herer, but Bruce Banner has a similar energizing yet relaxing effect.

Why is it called Alaskan Thunderfuck?

This strain originated in Matanuska Valley, Alaska, so it gets its first name from this location. The second name is a result of its insanely electrifying buds. This strain also shares a name with a famous drag queen known for her energy and lively nature.

How big does an Alaskan Thunderfuck cannabis plant grow?

These plants reach a moderate height of around 2.5 feet. They’re short enough to fit into any cultivation area and don’t grow too bushy either. Use LST techniques to train them to conform to the space and occasionally prune to keep the foliage under control.

« Rust Spots On Leaves During Flowering: Causes And Treatments
Cannabis Leaf Septoria: Everything You Need To Know About this Fungus »