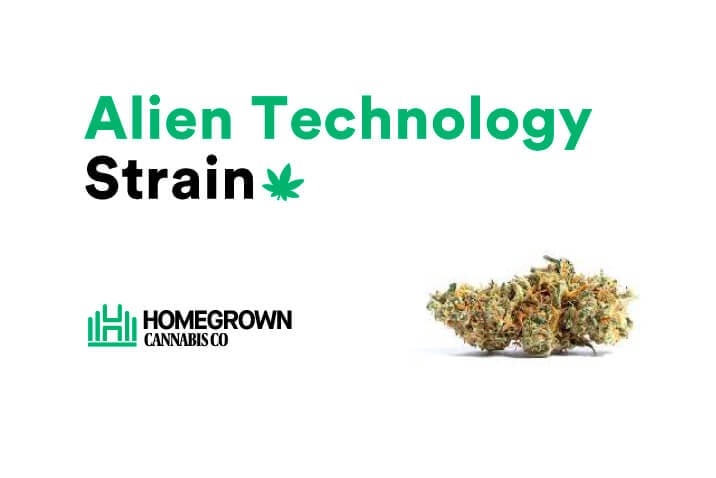 You might be skeptical about extraterrestrial activity at the moment, but that won’t last long. The Alien Technology strain will show you the depths of the universe without removing you from the comfort of your couch cushions.

This gorgeous indica-dominant marijuana plant has origins as mysterious as its evocative name. What we do know is that its fruit-and-fuel aroma will take you on a long tour of mental space travel.

Before diving into the details, let’s run down the basic info regarding the weed strain Alien Technology.

The Alien Technology strain is a heavy hitter. With a range of 19% to 21% THC and minimal CBD levels, there’s no way you won’t feel the brain and body punch it delivers. Luckily, the ride is as enjoyable as it gets.

Despite their indica dominance, these colas stimulate the mind first. You find yourself lost in carefree delight as soon as intoxication reaches your bloodstream. The exaltation is a bit trippy, getting you to think outside the box and perceive the world in an altered light.

Weed of Alien Technology follows up the cerebral jolt with a full-body blow that leaves you content in your seat. Couch-lock isn’t imminent, but your soft and heavy limbs don’t feel like doing much besides melting down in relaxation.

Light movement feels good, especially if your newfound creativity drives you to practice yoga, dance, or make love. Don’t end up somewhere too far from your bed, though. As you sober up, you’ll drift off into a night of peaceful slumber.

This cultivar is a tasty affair. Despite its traditional ganja base of musky earth and freshly cut pine trees, Alien Technology is an exotic weed strain. The cannabis perfume features notes of fuel, sweetness, and spice that come out to greet you upon curing the buds.

Combustion awakens the multi-layered zest adorning the rich earthy essence. A sourness of citrus fuses with diesel for an aromatic bouquet reminiscent of an overripe tropical garden.

The savory blend of fragrances is tamer on the palate. A wood flavor coats the tongue while the taste buds detect hints of sweet fruit and strange spices. The aftertaste is a pleasant combination of tartness and smooth vanilla that lingers for long hours after the final exhale.

The high flower-to-leaf ratio offsets the foliage density, promising generous harvests after a relatively short flowering time. You can sow these marijuana seeds indoors or out, depending on your climate and gardening preferences.

Controlled setups with humidity below 50% and temperatures in the 68–77° F range are perfect. These orange-and-moss shorties lend themselves to the Sea of Green (SOG) training technique. You’ll collect up to 18 oz. of flowers per square meter after ten weeks of ripening.

The great outdoors is another excellent growing environment for the Alien Technology strain, as long as the air is dry, rainfall rare, and days long and sunny. Pruning doubles in importance in the open air, where each crop yields 15 oz. of harvest-ready buds in late September.

True to its name, the Alien Technology strain is shrouded in mystery. We know very little about this cultivar, except for the fact it descended from an Afghani landrace. The effect profile shows some sativa in the genetic equation, but that’s where our expertise stops.

Why not give it a shot and try to fill in the blank of its family tree with a guess of your own?

Alien Technology strain seeds to buy near you

Would you like to experience a supremely rewarding cultivation experience? Today’s your lucky day. Homegrown sells Alien Technology strain seeds in not one but two variants.

Our Alien Technology regular seeds let you grow an equal number of males and females, producing smokable colas and new seeds for cross-fertilization and breeding exercise.

If you’re a more traditional grow-to-smoke kind of shopper, get Alien Technology feminized seeds. These develop into female plants 99% of the time and eliminate the pollination risk.

People love weed of Alien Technology origins, and the reviews on our site prove that. The authentic reports from real growers on the site are still scarce, but here’s what some happy shoppers had to say:

“Delivery was a little slower, but arrived undamaged with clear labeling. Started 3 seeds at different times and all germinated. First lady is mid veg and is exploding with growth the last few weeks, while the other two are just out of seeding stage and are healthy and strong. thus far has responded well to LTS training.”

Mike B. on Alien Technology fem

Time flies with the THC enchantment of the Alien Technology strain. Light it up at the end of a monotone day, sit back, and savor its intricate fragrance. Let tension disappear and leave room for bigger, better things.

Check our Homegrown Forum for guides on all things weed. Our resources are here to ensure stoners stay happy, healthy, safe, and ready to explore.

« Can You Mix Lexapro and Weed?
Laced Weed: What is It and How To Tell If Weed Is Laced »