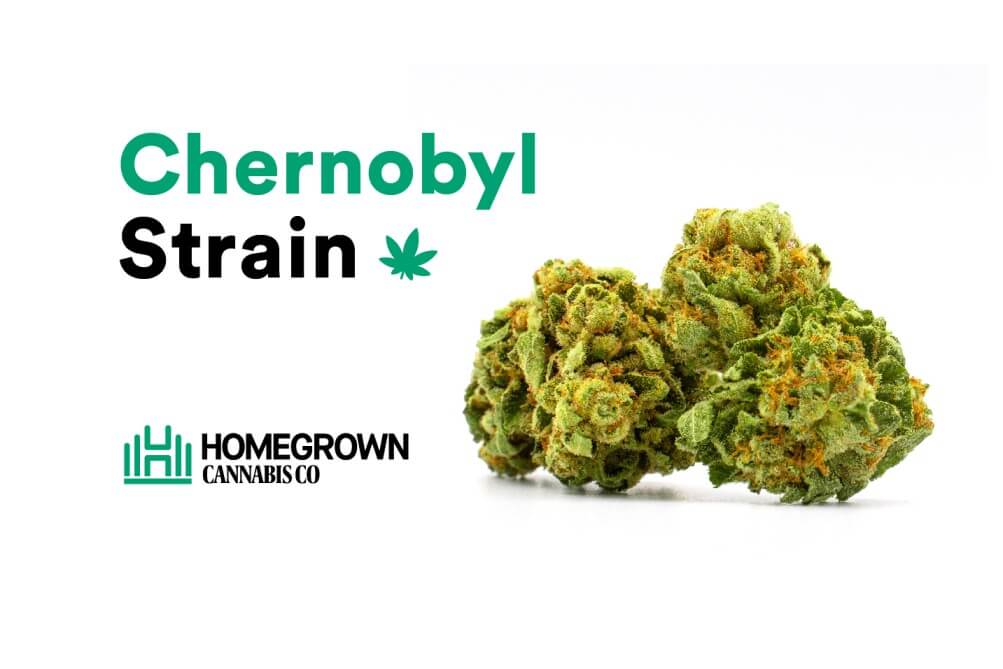 The Chernobyl strain has many nicknames. You might know it as Trinoble weed, PDX, TGA Chernobyl, or Holy Trinity, to list a few. This sativa dominant weed has a legendary landrace heritage. Its parents are the ones to blame for its unrivaled potency.

Chernobyl marijuana strain isn’t for the newbie smoker. It’s renowned for getting ahead of even the most seasoned stoners. With that said, if you can handle your high, it’s a great party smoke for its stimulative effects.

The dankenstein seeds are rare to get hold of; you can’t even order them from the original breeder. For those fortunate enough to hunt some down, its heavy-hitting high won’t disappoint.

Your mouth will water with the fruity flavors and undertones of herbal earth. A tidal wave of relaxation will then take over your stresses. The Chernobyl strain is perfect for uplifting users who struggle with depression and anxiety.

High Times nominated it as one of the Top 10 strains of the year (2010). Why not see what all the fuss is about? Experience the focused buzz of 70% sativa against the warm embrace of 30% indica. Continue reading our Chernobyl strain review to learn more about this Californian powerhouse.

The Chernobyl strain has various stand-out traits. These make it a popular choice amongst adult and medicinal users. Take a look at the basic Chernobyl weed strain info right here.

Like its namesake, the Chernobyl strain is nuclear-powered cannabis. On a few occasions, its THC test results have broken industry records at a mind-bending 30%. However, on average, your buds will hold around 16 to 26% potency, still not for the faint-hearted.

Take a look at some Chernobyl strain pictures to see the dense olive green nugs. The colas give a strength warning with bright orange pistils and powdery trichomes. Its pungent smell swamps the air and prepares your taste buds for the dank flavor profile that’s to come. The aftertaste of sweet, tropical fruits and a citrus zing will have you coming back for more.

Its long-lasting dreamy effects are ideal for a wake and bake session. A few tokes will carry you throughout the day. There’s no questioning whether the Chernobyl weed strain is sativa or indica when its invigorating properties kick in. As deep as the full-body high is, you’ll be up on your feet feeling creative, productive, and chatty.

The Chernobyl marijuana strain is popular amongst medical marijuana patients. Its high THC level paired with its stimulative abilities helps to subdue chronic pains. The Chernobyl strain CBD content is also high at 6%. These figures help support people to find comfort in its happy, euphoric effects.

Like its potency, growing the Chernobyl cannabis strain isn’t for beginners. Due to its sativa background, the plant can grow as high as 2 meters. Indoors cultivators will need a Chernobyl strain grow room big enough to accommodate its size. You should also have enough experience to trim it without jeopardizing the yield.

The Chernobyl strain flowering time takes around 8 to 9 weeks. It prefers a warm sunny climate and thrives best outdoors. You can expect your indoor Chernobyl strain yield to weigh around 14 oz per square meter. In comparison outdoors, you can harvest 14 oz per cannabis plant if you let your crops mature until October.

Pro tips for growing the strain Chernobyl include:

To keep track of your home cultivation adventures, use our Homegrown Diaries. Why not share your experiences with others, too, and learn some new tricks along the way.

Californian breeders TGA Genetics are to thank for the Chernobyl weed strain. Co-founder of the business Subcool brought the pot strain into the world in 2007. They cross-bred a female Bloodwreck plant with a male Jack the Ripper.

Bloodwreck is a hybrid of Trinity and Trainwreck. It’s also famous for Queen Anne’s revenge strain and Timewreck.

Chernobyl strain seeds to buy near you

The original Chernobyl strain seeds are hard to come by nowadays. At this time, our catalog of seeds doesn’t include Chernobyl. Its parent plants and hybrid predecessors are more readily available.

Check out the ones in stock at Home Grown Cannabis Co.

As its name suggests, the Chernobyl strain will pack a serious punch if you’re not prepared for its long-lasting effects. Chernobyl strain info reports that its fans prefer small doses throughout the day to keep their minds focused, but their bodies in a state of bliss.

Share with friends for a tasty and aromatic high that’ll keep the conversation flowing. Alternately medicate with weed strain Chernobyl to keep chronic pains at bay during your busy day and overnight.

The Homegrown Diaries is the perfect place to document your growing experience. On this page, you can also share tips with like-minded enthusiasts. For more cannabis chat, join our Homegrown Forum today.