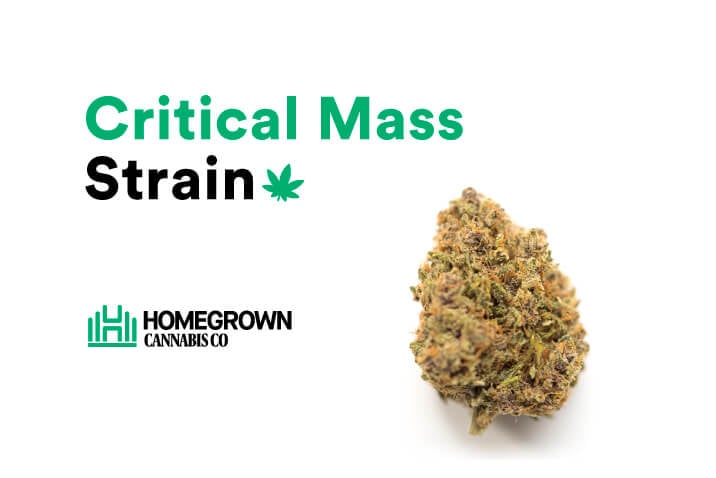 Critical Mass strain needs to be a critical part of your grow room. It comes from two powerhouse strains, Afghani and Skunk #1, that merged to create an indica dominant cultivar.

Do you want to know more about this strain? Continue reading to understand the effects, flavors, grow information, genetics, reviews, and where to buy Critical Mass seeds near you.

What strain is Critical Mass? We’re going to tell you!

Let’s go over some of the essential information about the cultivar.

Medical and recreational users enjoy Critical Mass strain weed for its relaxing qualities. It’s ideal for an after-work buzz to forget the stress of the day. When you take your first hit, it instantly takes you to a blissful, uplifting place.

It melts any anxieties, worries, or tensions, and you feel happy. Critical Mass washes away any aches or pains, and you feel like you’re sitting on a cloud of relaxation. Most likely, you won’t want to be active; instead, your couch will seem like heaven.

As the indica sets in, along with the CBD, your mind enters a place of tranquility. It’s a good time to clear your negative thoughts and think about a positive future. As the relaxation of the Critical Mass strain effects become stronger, you drift to sleep like a newborn baby.

After enjoying the best rest of your life, you wake up the next morning feeling refreshed and ready to start the day.

One of the many highlights of the Critical Mass strain is its attractive flavor. On the inhale, your mouth fills with sweet fruit, which tastes as though you’re eating tropical candies.

The exhale boasts an orange citrus tang with notes of skunk, earth, and wood. The undertones offset the sweetness, creating a balanced flavor. You won’t want to put your Critical Mass strain joint down because of the delicious taste.

Critical Mass is straightforward to grow and ideal for beginners. Like most indica marijuana plants, they’re compact, sturdy, and short in size, making them more manageable for novice cultivators.

The Critical Mass strain is popular for all types of weed gardeners because of its huge dense buds. During flowering, you need to install supports or use the Screen of Green technique to help the branches from breaking.

Dense foliage can cause mold and mildew build-up. You need to keep an eye on your humidity levels to avoid pathogens attacking your Critical Mass weed plants. You’ll need to do some regular trimming as well to increase airflow.

Other than that, Critical Mass weed crops thrive in a consistently controlled environment that’s mild.

When the Critical Mass strain plant matures, you’ll love how beautiful it becomes. It has sage green leaves and massive nugs with orange pistils popping out in every direction. The buds are coated with a thick layer of crystal trichomes, which make your mouth water.

The Critical Mass strain is the offspring of Afghani and Skunk #1, both legendary strains.

Critical Mass strain seeds to buy near you

Driving around trying to find Critical Mass strain weed seeds can be a headache. Dispensaries don’t always carry all of the best cannabis seeds.

Let’s take a look at the various Critical Mass options.

Here are some of the Critical Mass strain reviews from our customers:

There’s really nothing bad you can say about the Critical Mass strain. It creates a relaxing and calming high while freeing up body and mind tensions. Growing Critical Mass weed strain seeds is great for beginners and produces a harvest with gigantic buds.

If you want to communicate with real customers and growers like you, start your own Critical Mass Homegrown Diary. It doesn’t just stop with this strain. Join the Homegrown Diaries for first-hand advice on all types of weed strains, and check the Homegrown Forum for more information.

What are you waiting for? Buy Critical Mass weed seeds today.

« Mango and Weed: Do Mangoes Get You Higher?
Foxtailing Buds: A Wolf That Sends Flowers »