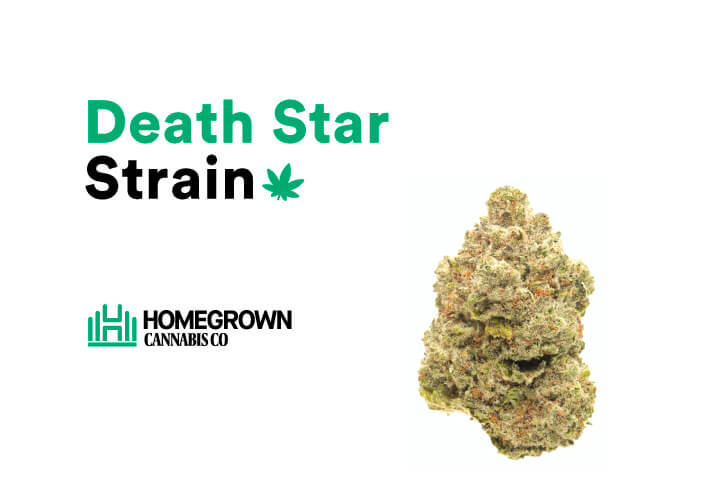 Want to blast your anxiety into smithereens? The Death Star strain’s super-laser destroys the last hints of physical and psychological discomfort.

This herb is an indica-dominant hybrid with an old-school aroma and timeless appeal. It’s the go-to for tense tokers, and its growth patterns make it much-loved among cultivators.

Join us to explore Death Star weed. We discuss its bouquet, effects, and genetics before sharing tips on buying and growing these seeds at home.

Here’s a rundown of the basics about the DS strain:

Deathstar weed packs quite a psychoactive punch. It’s rich in THC and scarce in CBD, so take your time between puffs. When consumed in moderation, the effect profile arrives in layers, starting with elation and ending with sedation.

Like most indica-dominant strains, this one eventually eliminates all desire to move. It’s perfect for post-work afternoons where your ultimate goal is to loosen up.

The Death Star strain’s effects creep up on you. Before you know it, the pressure around the temples turns into a carefree and giggly vibe. This initial euphoria pairs well with low-effort activities and artistic endeavors.

As time passes, the high gets physical. Your body becomes warm and heavy, and your limbs buzz with pleasure. A dose of couch-lock and the munchies ensue, followed by dreamy drowsiness.

These pacifying properties also make Death Star weed suitable for medicinal use. Anxious individuals find solace in it, as do insomniacs looking for a sleeping aid. It might also soothe nausea and pain, leaving you symptom-free for several blissful hours.

Tip: Check the Homegrown Forum for more resources on using cannabis to feel your best.

Death Star marijuana’s bouquet is anything but discreet. This plant oozes scents of old-school ganja, engulfing your room and lungs.

The fragrance first becomes evident in early flowering. The buds emanate earth smells laced with sharp diesel. The musky base deepens with curing, and a skunky overtone develops.

Light up and let kerosene fill your room. A sour flavor tickles your palate on the inhale while herbs and spices linger on the tongue. The exhale leaves an earthy aftertaste with traces of lemon zest and faint sweetness.

The Death Star marijuana strain is a novice’s dream. It grows short and bushy, producing plenty of bud sites and few unproductive leaves. It’s mold-resistant, and its chemicals don’t seem to appeal to pests.

This cultivar enjoys temperatures in the 68–80°F range and relative humidity of 40–50%. Use organic nutrients and trim away the excess foliage during the vegetative stage. The Sea of Green (SOG) training technique helps you save space and optimize output.

The Death Star strain flowering time is 7–9 weeks, and this stage usually necessitates a carbon filter. It brings 14 ounces of bud per square meter of your grow room.

If growing outdoors, sow your Death Star strain seeds in mid-April. Prune the foliage every week to help the buds thicken. Crops are harvest-ready in mid-October, carrying around 12 ounces of fat flowers each.

Tip: Sign up for the Homegrown Diaries to track your progress and share it with others. You’ll get tips and encouragement from real-life fellow growers.

The Death Star strain is a Sour Diesel x Sensi Star cross. Breeders from Team Death-Star first created it in Ohio in the early 2000s. It’s since gained a reputation and renown throughout the Midwest and East Coast.

Death Star strain seeds to buy near you

Our seed bank is yet to stock Death Star strain seeds for sale, but we have cultivars of similar traits. If you’re tempted to try this Ohio-bred hybrid, you’ll enjoy its cousins from our selection of original Sour Diesel seeds.

Don’t feel like exploring alternatives by yourself? These two cultivars never fail to impress:

Have additional questions about the Death Star cannabis strain? Here are some common inquiries and our expert answers.

Is the Death Star strain indica or sativa?

This cultivar is indica-dominant. The sativa traits are apparent in the uplifting head high and the buds’ strong lemon scent. The predominantly physical influence, musky smell, and bushy stature scream indica, though.

What strain is similar to Death Star?

If looking for marijuana that resembles the Death Star’s indica properties, try Mochalope or Critical Mass. Both cultivars soothe the body and uplift the mind. Sour Diesel and Chemdawg are guaranteed to scratch the itch if you’re a kerosene fan.

Is Death Star good for anxiety?

Death Star’s THC contents and relaxing effects appear to work against anxiety. According to tokers, it makes the body too calm to shake, flutter, and sweat. It also brings good vibes to your mind space, so stressful thoughts and ideas fall to the wayside.

Why is it called Death Star?

A team of the same name first bred the Death Star strain. They also made Jedi Kush, so it seems they sincerely appreciate Star Wars. Alternatively, the name could point to the plant’s psychoactive power, invoking images of something mind-blowing.

The Death Star weed strain displays incredible resistance to most cultivation pitfalls. It’s not susceptible to mold or mildew, although bud rot could happen in late flowering.

How big does a Death Star cannabis plant grow?

Death Star weed plantsremain small throughout their life cycle. They don’t stretch past three feet indoors, while outdoor phenotypes might hit four feet after flowering. You can keep them even more compact by employing training techniques like Sea of Green.