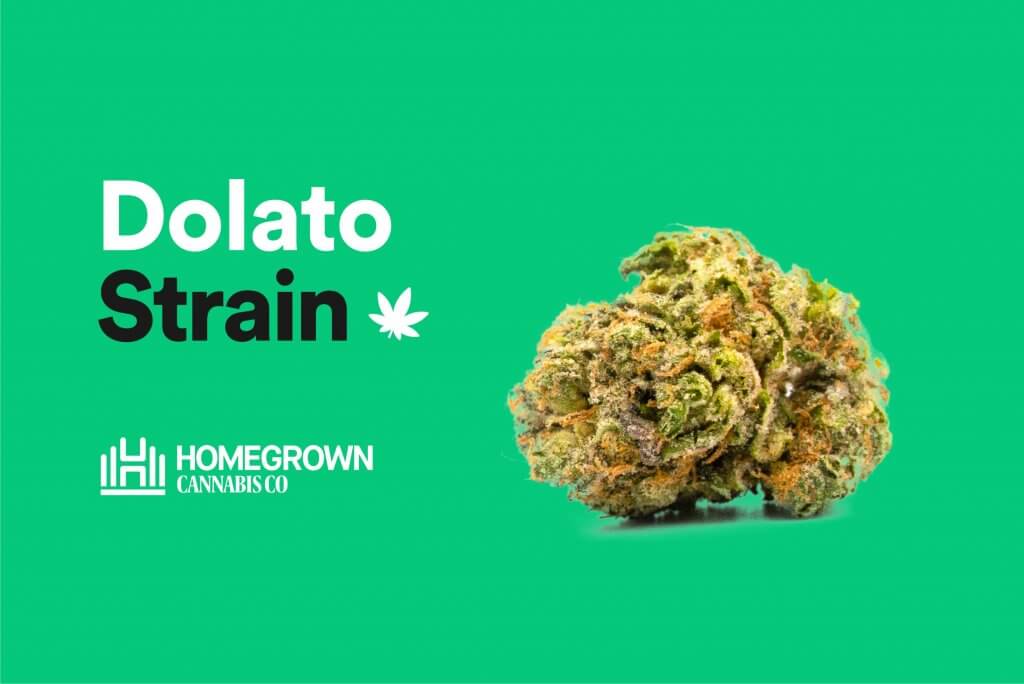 Is it possible to experience stress and pain relief when smoking cannabis without worrying about being heavily sedated? If you’re using the Dolato strain, the answer is affirmative, according to users’ claims.

This indica-dominant cultivar is known for its medical benefits as well as the enjoyment it provides. It’s also relatively easy to grow if you have some cultivation experience. Let’s learn more about it in our Dolato strain review.

The popular Dolato strain, also known as Dosi-lato and Do-si-lato, is the offspring of Gelato #41 and Do-si-dos.

Before we take a closer look at this cannabis strain, here’s a quick rundown of its traits.

Let’s review the Dolato strain info. First, its origins. This hybrid is the result of crossing two indicas, Gelato #41 and Do-Si-Dos. The latter is the more dominant of the two parents.

Dolato is a combination of the names of its parents. You’ll likely see the cultivar referred to as “Dosi-lato” or “Do-si-lato” in other strain reviews, but they are the same.

Users describe the Dolato strain’s berry-colored buds as being some of the most beautiful among marijuana cultivars. The appealing shades of its nugs range from reddish purple to bright orange and light to dark green. You’ll also notice they’re adorned with diamond-like trichomes.

This cannabis strain is smooth and light when smoked. This subtle experience helps ease beginner tokers into using it.

If you’re looking for weed that’ll help you chill out and relax after a tiring day, the Dolato strain is a popular choice. It’s known to leave you feeling stress-free. Since its buzz is smooth and light, you won’t feel euphoric until you’re completely high.

The buzz starts in your head and eases into your body, relaxing every limb. Before long, the Dolato strain will cause tingling in your hands and feet, leaving you with little to do but be stuck on the couch for the rest of the night.

Users claim an increase in their sensory perception when smoking the buds, enhancing the elements in their environment. What’s more, the Dolato strain is known to stimulate creativity in people who are artistically inclined, although the ideas will have to wait until the high wears off.

Besides alleviating feelings of stress, anxiety, and even depression, some say that the buzz also relieves chronic pain.

These effects are attributed to the high Dolato weed strain’s THC content. Ranging from 20–23% means you won’t instantly feel sedated unless you consume the nugs in excessive quantities. You’ll likely enjoy a few hours of feeling happy and euphoric before you fall asleep.

Other typical Dolato strain effects you should be aware of include dry eyes and mouth. You can easily get over them by drinking plenty of water.

Dolato is very potent. As such, newbies should ease themselves into it. You’re advised to start with small dosages, and when you’re used to the buzz, you can indulge more.

The Dolato strain is unique because it doesn’t take after its parents in terms of scent. Gelato #41 and Do-Si-Dos are pungent strains, but Dolato has a subtly sweet aroma. If you break open the buds and sniff it, you’ll detect its piney, earthy and fruity scents as well.

Flavor-wise, it’s mild and earthy, with berry-like notes, a little richer than its subtle aroma. The Dolato strain also has a sweet aftertaste that’s appealing. Its sweetness has been associated with the taste of lavender by some smokers.

With limonene as its dominant terpene, you may also find a lemony scent and taste. A keen toker will recognize the compound’s presence. The relief of anxiety and stress is said to be due to this rich citrus terpene.
Other tokers have mentioned notes of tobacco and even tar. The other dominant terpenes present in the Dolato strain are:

Growing the Dolato strain is fairly easy if you have mid-level cultivation experience. New growers can experiment with the strain but are better off waiting until they learn how to control the temperature and humidity level because it’s prone to moisture buildup.

As with most cannabis plants, the Dolato strain flourishes in environments that are mild and warm. In locations with summer temperatures between 70–79°F, you can expect a yield as high as 24.7 ounces per plant outdoors.

When cultivating in a Mediterranean climate, each plant can produce up to 18 ounces outdoors. The Dolato strain harvest time is typically in October if you’re in the northern hemisphere.

If you live in an area where the outdoor conditions are not suitable, consider growing the cultivar indoors so you can regulate its growth factors. You’ll get close to 17 ounces per square meter of buds within 8–9 weeks of flowering.

Walking through a dispensary, you’ll be able to spot this Dolato strain immediately. The intense green buds with gleaming violet tones catch your eye in an instant. Their appearance gets you excited even before your first toke.

The pistils encompass the entire bud and are bright orange. The high THC content is due to the trichomes being milky white. The delicate buds should be harvested before they turn amber.

The Dolato strain will mature into a strong and large plant. If you’re cultivating indoors, you’ll need to prune it early in its vegetative stage to produce the best results. Give your plant plenty of nutrients such as calcium (Ca) and magnesium (Mg) for optimal growth.

When growing the Dolato strain in small spaces, use the Sea of Green (SOG) method for maximum productivity. Many cultivators suggest using the Screen of Green (ScroG) technique as it also helps the cannabis plant reach its full potential.

Whether grown indoors or outside, these cultivars are not known for their excessive height but remain manageable. Pruning in the vegetative state is essential to allow sunlight and airflow into these bushy plants.

Keeping the conditions similar to the climate in the Mediterranean will boost the growth of your crops. The bonus is that these budding cultivars are resistant to mildew, pests, and mold.

The Dolato strain genetics derives from the union of two indica strains, Gelato #41 and Do-si-dos. The result is an indica-dominant strain that’s tasty, offers medicinal benefits, yet doesn’t knock you out immediately.

Cultivating cannabis is not solely about the methods and conditions. You can also make your growing experience easier by choosing the right seeds. The Dolato strain is currently only available as a feminized seed.

Dolato feminized seeds: With an all-female crop, you won’t spend time and effort identifying the males and removing them. You’ll also eliminate the threat of pollination. The result will be a smoother process and a great yield.

We offer growers of the Dolato strain an excellent way to track and record every stage of the process in our Dolato Homegrown Diary. It’s simple to use. Check out what other cultivators are doing on our Homegrown Diaries site.

Another resource that’s invaluable to growers, especially beginners, is our Homegrown Forum. It’s where experienced cultivators share their stories and tips on cannabis cultivation. You’ll learn from some of the best.

Sign up now to receive the latest news and get notified when new strains are added to our seed collection.

« CO2 for Cannabis: How to Increase Your Yields
Fast Flowering Strains: What You Need To Know »