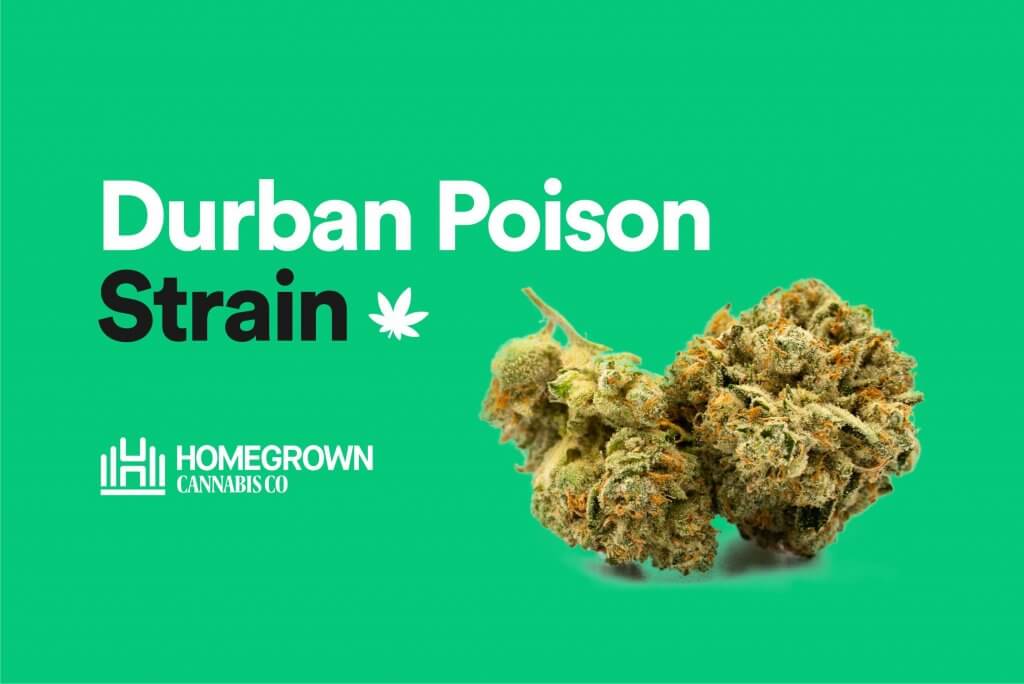 The Durban Poison strain is a landrace strain discovered in the 1970s and originates from Durban, the second-largest city in South Africa.

A U.S citizen by the name of Ed Rosenthal took the Durban Poison marijuana strain to the states and began improving it through selective breeding. Ed then handed the Durban strain over to his friend, Mel Frank, for further development.

Mel worked with many generations of this plant and selected the fastest producing and most resinous of them to create two distinct phenotypes named A and B. The B phenotype was the one that found its way into Europe, being gifted to Sam the Skunkman. Sams work on the Durban Poison weed strain is what made it as famous as it is today.

Now that we know a bit of the strain’s history, let’s discover some Durban Poison strain info.

Durban Poison (AKA The Espresso of Cannabis)

This fantastic landrace strain has many sought-after qualities. Below you’ll find what it’s comprised of, and what makes this beauty so special.

The Sour Diesel strain is a great wake n bake partner to get your creative juices flowing. The Durban Kush strain is one for procrastinators. Unlike its indica counterparts, the Durban Poison strain provides its users with clear-functional effects, sparking productivity and encouraging completion of all those put-off tasks.

High THC levels and resin production makes the Durban Cookies strain powerful and not to be underestimated. Even veteran smokers know to be careful not to overdo it as those who’ve had one too many tokes may end up with feelings of paranoia.

The first impression created by the Durban Kush strain is its sweet, spicy fragrances with pine and woody undertones. This is soon followed by a sugary lemon-candy and anise taste when lighting up. The anise flavor has intrigued smokers worldwide and contributed greatly to the popularity of this South African beauty.

Massive, milky white, chunky buds with abundant orange trichomes and large resin glands make the white Durban strain appeal to all levels of growers. The purple Durban strain grows well both outdoors and indoors. It’s often recommended to plant seeds outside as they grow pretty tall and need a lot of space to reach their full potential.

The Durban Poison strain is highly resilient and can flourish outside in many different climates. When given space, this monster of a crop can reach up to 7feet, towering over you. This is something to consider if you need to keep your plants out of public view, as their sheer size might be a clean giveaway.

If you prefer to grow your seeds indoors, you’ll need to provide a large enough area for your Durban Poison strain to spread out. If you don’t have much vertical space, the sea of green (SCROG) method has proven highly successful in allowing for shrubs to spread outwards rather than upwards.

Below you’ll find some factors to take into consideration when cultivating the Durban Poison marijuana strain.

The exact heritage of this South-African landrace remains a mystery, but it appears to be a descendant of a South African bred sativa.

The Durban Poison strain is the parent to both the Cherry Pie and Platinum Cookies strains. This potent sativa appears to carry through the best parts of its genetics to its offspring. You can look forward to smoking a bud that originates from this Durban strain.

Durban Poison strain seeds to buy near you

If you’re looking to buy some of this wake-up-and-go strain’s seeds, you’ve come to the right place. With our wide variety, we’ve got you covered no matter your preference.

Reading a cannabis cultivar assessment, like the Durban Poison strain review, often leaves the reader with some doubts and queries. To minimize uncertainty, we’ve compiled some of the most frequently asked questions regarding this fantastic landrace and answered them below.

Is Durban Poison a sativa or indica?

The Durban Poison weed strain is a landrace cultivar native to Durban, South Africa. Following its discovery during the ’70s, Ed Rosenthal, an American citizen, smuggled this pure sativa specimen into the states. He immediately started to work on improving it through selective breeding.

Ed then handed the Durban Poison strain over to his buddy Mel Frank for further development. After working with these plants for many generations, Mel finally selected the most resinous, fastest producing specimen and created two distinct phenotypes, A and B.

Phenotype B eventually ended up in Europe as a gift to Sam the Skunkman. He subsequently continued developing the Durban Poison marijuana even further, making it the much-loved cultivar we know today.

Unlike many other wake-and-bake specimens, the Durban Poison strain, being a pure sativa, provides you with clear-functional effects, inducing creativity and productivity.

Is Durban Poison a strong strain?

The Durban Poison weed may not be the strongest cultivar on the market, but don’t let its moderate THC content fool you. With levels averaging around 17%, this pure sativa delivers an intense uplifting, clear function buzz. It stimulates your mood, social ability, and creativity, making it excellent for daytime use.

It’s easy to overindulge in weed from the Durban Poison marijuana strain, especially for those sensitive to THC. Our advice is to start slow and build from there.

How does Durban Poison make you feel?

Consuming weed from the Durban Poison strain leaves you feeling euphoric, energized, creative, and focused. Once the fast-acting effects take hold, it thrusts your mind into overdrive and your body into useful action. As your mind clears, your body wakes up with renewed energy, making you ready to navigate through the day’s tasks intelligently.

Known as the raciest sativa, cannabis from the Durban Poison weed strain induces a crystal clear cerebral buzz without that dazed and confused sensation. For this reason, it’s the ultimate daytime cultivar.

For medicinal users, weed from the Durban Poison marijuana strain may offer potential long-lasting relief from various ailments, allowing them to live a better, fuller life. These health concerns include:

Will Durban Poison make you sleepy?

Simultaneously, this cannabis relaxes your entire body, making you move about smoother and free from discomfort. However, this sense of calm isn’t enough to ever make you feel drowsy or to result in you falling asleep right away.

Is Durban Poison a Landrace strain?

While looking for new strains to work on during the ’70s, Ed Rosenthal discovered this iconic sativa in the southern region of South Africa. Although the Durban Poison strain genetics remain largely unknown, many cannabis enthusiasts believe this legendary cultivar is an ancient landrace, untouched by human intervention.

Does the Durban Poison strain give you the munchies?

Unlike THC (known for inducing the munchies), THCv has the exact opposite effect, leaving patients without much of an appetite at all. This property makes the Durban Poison strain an immensely popular choice amongst tokers looking to lose or avoid gaining pounds from binge eating.

Where does the strain Durban Poison come from?

The Durban Poison weed strain, named after the port city of Durban, is a legendary landrace that’s been gaining immense popularity since the ’70s. Originating from the coastal region of the Natal province in South Africa, this earthy and sweet-smelling specimen found its way into the USA and Europe.

The Durban Poison marijuana strain is a naturally occurring, ancient landrace. However, since its discovery during the ’70s, it’s become a staple in cannabis circles worldwide, used to breed a wide range of well-known hybrids.

According to legend, Durban Poison eventually ended up in the hands of some of the most capable cannabis legends in Amsterdam. These cultivators became the first to crossbreed this landrace cultivar with local Skunk varieties, hybridizing the strain for commercial value.
The Girl Scout Cookies, Platinum Cookies, and Cherry Pie strains are amongst the most notorious hybrids fathered by the Durban Poison strain.

The Durban Poison strain is a sweet-smelling energy booster bound to uplift and motivate you through your daily tasks.

If you’ve been enticed to start growing your own Durban Poison weed strain, join our Durban Poison Homegrown Diary now to track all your progress.

Our Homegrown Diaries can be used to track the progress of all the strains you choose to cultivate. You’ll find all the advice you could wish for as well as information regarding the latest and greatest strains and grow information by joining our Homegrown Forum.

« Lemon Tree Strain Information & Review
Cannabis Nutrients: Everything You Should Know About Fertilizers »