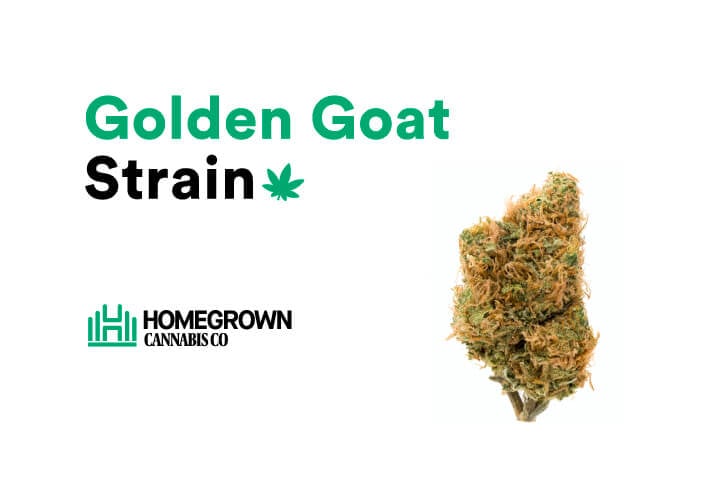 An exciting misadventure between three phenomenal marijuana strains caused the creation of the Golden Goat strain. It ranked third for “Best Medical Hybrid” at the Cannabis Cup in 2014.

This prized hybrid is a fantastic choice to add to your shopping cart if you need an energy boost. It encompasses a distinct odor and color while boasting a high trichome offering.

Let’s delve deeper into this potent strain that helps you get creative while giving you an incredible euphoric high. We detail the flavors, effects, tips for growing, and all the information you need about the Golden Goat weed strain.

Below is all the vital information about this exciting cultivar:

Some tokers trying this weed for the first time admit it’s the “happiest high” they’ve had in ages. Let’s explore some of the Golden Goat strain effects.

A sativa high hits slowly from the initial toke. Colors intensify, sounds become more explicit, and surroundings magnify. You feel more alert and focused, and simple objects captivate your attention like a baby exploring a playground.

Non-stop talking and bursts of energy occur in the early stages. These feelings soon turn to upliftment and physical relaxation. You feel completely calm as you forget the troubles of your day and unwind in deep contentment.

Some possible medical benefits of the Golden Goat cannabis strain include the following:

Golden Goat reviews on its flavors state that the primary taste is sweet and sour. The buds produced are medium-sized and dense. Flowers are covered in amber trichomes, and when you grow and cure them correctly, expect them to be pretty sticky.

Expect a strong aroma with a complex composition featuring diverse flavors. When lit, the buds produce an earthy and spicy scent with hints of tropical fruit. With genetics taking you back to Hawaii, you also get a whiff of mango and pine.

If you search for “Golden Goat strain near me,” it may be challenging to find. The cultivar is primarily clone-only, so unlike common sativa seeds, these are rare to get your hands on.

In most cases, it’s only possible to obtain clippings from the matured plant and transplant them.

This strain flourishes indoors or outdoors, but due to its characteristically sativa height, outside may be more reasonable. Some of these plants can grow as tall as six feet.

Our Homegrown cannabis seed bank stocks a wide range of premium products. We don’t have this strain currently, but we constantly update our catalog, so stay tuned to our site. If you’re fortunate enough to get your hands on some seeds, there are a few growing tips below.

These plants flourish outdoors and prefer a warmer climate. It’s ideal to start the growing process in April (spring) to harvest in late October (fall).

Cultivate them in temperatures of 72–80°F with adequate sunlight. The spacing of the plants needs to allow for stretching due to the Golden Goat marijuana strain being wispy and tall. The outdoor yield is around 18–21 oz. per plant.

Although Golden Goat crops are better suited for the outdoors, growing inside is also possible. Once the light cycle turns to 12/12, the flowering stage begins. Expect to harvest the buds in 9–11 weeks from that period.

When growing under cover inside, consider the spacing between pots and allow adequate height under the lights. Plants grown too close to the source can affect the size of the buds. Expect a yield of 14–18 oz./m², a generous amount when cultivating indoors.

Is the Golden Goat strain indica or sativa, and where did it originate from? Let’s explore its genetics.

Unidentified breeders discovered this unexpected cross between three potent strains in Topeka, Kansas. This state is not well-known for growing weed, especially since it’s not legal in that part of America.

The strains responsible for creating this phenomenal cultivar and passing on some of their distinct characteristics are Island Sweet Skunk, Hawaiian, and Romulan.

Below is an overview of each parent strain:

Island Sweet Skunk has high THC and minimal CBD levels. Just like the Golden Goat plants, these crops grow tall too. Due to their size, outdoor growing may be more realistic, but indoors is still possible.

Smoking the buds of Romulan induces a head rush and deep contentment, sending you straight into couch-lock. They have a candied earthy taste and produce a powerful high. The Golden Goat strain’s THC levels are similar to this parent counterpart.

This sativa-dominant strain is the main ingredient in many other well-known cultivars. It boasts high THC levels of 15–25% and minimal CBD levels of around 1%. Two well-known sativa cultivars that were bred from Hawaiian are Hawaiian Dream and Hawaiian Haze.

FAQs about the Golden Goat strain

We’ve gone in-depth into Golden Goat, but some questions may still be on your mind. Check out our answers to the most common queries below.

Is the Golden Goat strain indica or sativa?

What strain is Golden Goat? This hybrid is about 65% sativa and 35% indica. You feel a welcome blend of both, giving you an energy boost while you experience elated happiness and relaxation.

What strain is similar to Golden Goat?

The genetic parents that produced Golden Goat possess some similar features. These strains are Hawaiian, Romulan, and Island Sweet Skunk.

Is the Golden Goat strain good for anxiety?

Golden Goat strain reviews by tokers praise it for some of the best “happy highs” they’ve experienced. Its sativa-dominance makes it ideal for helping with uplifting the body’s senses and assisting with anxiety and depression.

Why is this strain called Golden Goat?

This strain received its name after the Golden Goat recycling plant. Its reputation alludes to the sweet odors that the salvage yard released.

How big does the Golden Goat cannabis plant grow?

Due to being sativa-dominant, Golden Goat plants can grow to over six feet tall, with leaves that require adequate space to fan out. The sheer size of the plant makes it necessary to train and trim it often.