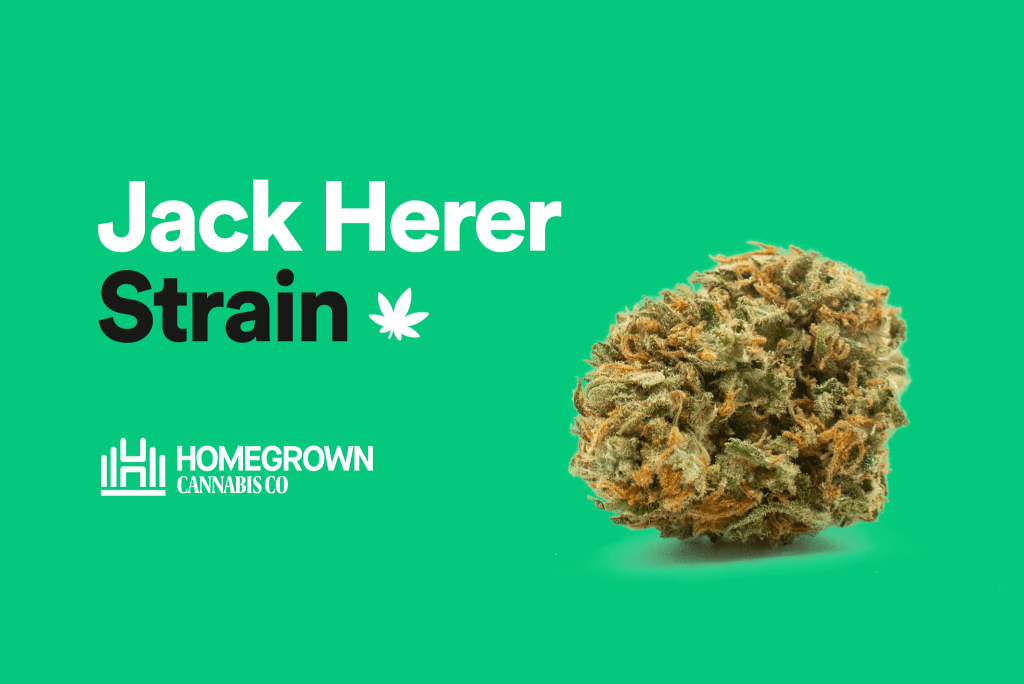 As a legendary cannabis activist and author of “The Emperor wears no clothes,” the late Jack Herer strain rightfully earned his place in the marijuana hall of fame.

The Jack Herer weed strain is an honorable tribute to its namesake. This Dutch creation is an almost perfect sativa/indica hybrid that boasts nine first-place awards from the High Time Cannabis Cup. Its blended spice, wood, pine, and tropical flavor will uplift your mood while putting your body in a heavenly calm.

Its lineage may be unconfirmed, but the Jack Herer marijuana strain remains a favorite and frequently used variant amongst cultivators for breeding new hybrids.

Are you itching to add this variety to your garden? Read on for our comprehensive Jack Herer review.

Before we delve into the magic of this breed, here’s a quick rundown of the most essential Jack Herer info.

Jack Herer is a popular name amongst weed enthusiasts. Apart from writing the controversial “The Emperor wears no clothes,” he was also one of the most illustrious pro-cannabis activists in history.

Being a much-respected figure in the marijuana industry, it was only a matter of time before a strain got named after him.

In honor of its namesake, the weed strain Jack Herer is a sativa-dominant hybrid and one of the most highly-rewarded and popular ganja varieties in the world. Often referred to as the “perfect blend” by its multitude of fans, this ganja will provide you with an exceptionally appealing flavor that leads to a well-balanced kick.

Created by Sensi Seeds in the mid-’90s, the aim was for Jack Herer buds to capture both the sativa’s transcending elevation and the indica’s heavy resin production.

Jack Herer genetics gave rise to several different variations of the breed, each with its own unique effects and features. Overall, stoners typically describe this sativa-dominant hybrid as calming, euphoric, clear-headed, blissful, and creative. Besides its recreational properties, it’s also widely recognized as a medical-grade cannabis strain.

The spicy, peppery, and sweet pine-scented Jack Herer strain sativa received numerous awards over the years for both strength and excellence. Being a high THC ganja, you might want to sit down and relax before indulging yourself in its rich, aromatic flavor and taste.

The Jack Herer weed strain is one of the most widely cultivated and beloved ganja variants globally. For growers, it’s a dream come true as it’s a no-fuss plant that will thrive with minimum TLC, even under less than perfect conditions.

The Jack Herer strain yields bulky, high-quality buds within an exceptionally reasonable flowering time. It’s also naturally resilient against disease, mildew, mold, and bugs. As a low maintenance breed, the plants can be grown either outdoors or inside, provided you give them enough space as they can reach over six feet tall.

Growing the Jack Herer marijuana strain indoors in a hydroponic setup works extraordinarily well. Especially in combination with the Screen of Green (SCROG) method. It’s crucial to keep your plants warm (68° to 80° Fahrenheit) and provide them with plenty of food. The crop will flower for eight to ten weeks, developing massive colas.

It may be necessary to install support to prevent the branches from breaking under excessive weight. When they’re ready to harvest, the Jack Herer will yield between 14 and 17 ounces of delectable, potent buds per square foot.

Cultivating the Jack Herer weed strain outdoors requires a sunny, dry, and balmy environment. Being allowed to grow freely, the plants will reach their full potential. In a Mediterranean climate, you should be able to harvest around mid-October, and you can expect a yield of roughly 17.6 ounces of divine ganja per shrub.

With Jack Herer strain seeds available from Homegrown Cannabis Co., every cultivator can grow these plants within the comfort of their own weed garden.

As a planned project, Sensi Seeds, a dutch seed bank, developed the Jack Herer cannabis strain during the mid-’90s and named it after the famous pot activist. The idea aimed to capture the indica variants’ resin factory and the sativa’s cerebral stimulation.

This hybrid consists of 55% sativa and 45% indica. Over the years, it has won numerous awards and evolved to become one of the most frequently cultivated ganja varieties today.

The weed strain Jack Herer’s lineage remains unconfirmed, but it’s commonly believed to be a mix of the following:

Jack Herer strain seeds to buy near you

Enticed by our Jack Herer strain review and itching to give it a shot? Homegrown Cannabis Co. offers a wide variety of the highest-quality cannabis seed specimens currently available. Visit our online store today!

Seeds arrived quickly, and the first two I planted came right up. Currently, they are growing nicely. I cannot comment on quality until after harvest.

Popped 5, but only one made it past 4 days. I got replacements for next time. The one that made it is healthy and already in full flower by week 4 and pushing 2 plus feet from the soil. I need to do some more training, but it already has 12-14 tops reaching for the light! Keeping my ph at 6.4-6.7 close to 6.5. She has about 6 and a half weeks to go, and I’ll update on dry yield once I’m done. I’m really happy with the outcome so far.

You want to talk about a seed genetics that is gonna blow your mind for an auto, check this stream out you will be amazed what this thing does. Be ready for big collars and fast vigorous growth guys.

ONE OF THE BEST

I have not had some good Jack in a long time and took to ordering some as a first grow in a long time. It turned out superb. I personally loved it, and more so after my most veteran friends who grow gave it a grade “f*****g A+” I quote. After a few months curing, it is even more amazing.

I haven’t had one of these that hasn’t left a smile on my face. Full thick grow every time.

Would 10/10 recommend this strain to grow to anyone! This was my FIRST EVER photoperiod grow, and she was a seriously amazing plant to work with. She was quite the yielder too! Pulling 184.1 Grams dried / cured / trimmed in 105 days seed to harvest.

Whether you choose to grow the Jack Herer strain for medicinal or recreational purposes is up to you.

Even veteran stoners can’t resist the mouth-watering aroma and flavor of this world-famous marijuana variety.

It’s beginner-friendly, making it quick and easy to grow, and its buds will make an excellent addition to your private ganja stash.

Remember to track your progress and get great Jack Herer weed strain grow advice on Homegrown Diaries. Feel free to join Homegrown Forum to share your marijuana passion and stay updated with the latest happenings in the cannabis industry.