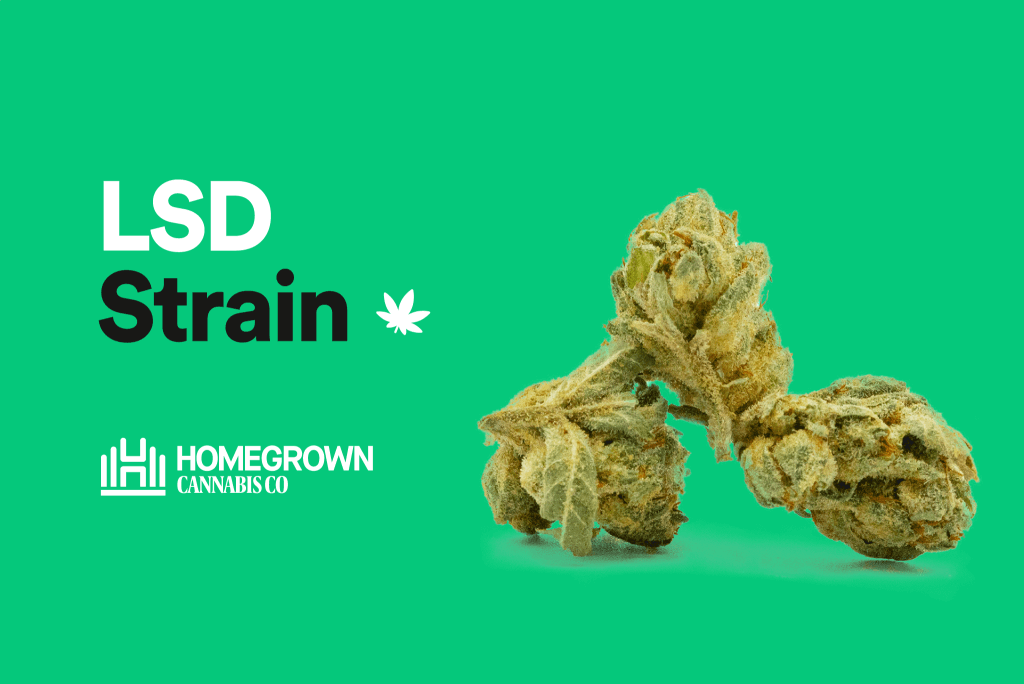 The LSD strain boasts high THC levels, making it a formidable cultivar that can overwhelm those with low tolerances. It’s become the go-to cultivar for those looking to experience a psychedelic body high similar to its namesake.

In this LSD strain review, we investigate this hallucinogenic cannabis in all its glory. You’ll find a detailed description of the LSD marijuana strain, including its flavor and effects.

We also provide everything you need to know to grow this cultivar at home.

Before we go down the rabbit hole with the LSD strain and its psychoactive properties, it helps to understand a few key aspects. Below is a list of the main talking points surrounding this cultivar.

The LSD strain sneaks under the radar, creating innocent-looking green buds with orange pistils. Its nuggets are then thickly coated in fluffy white trichomes that begin to signal this cultivars potency.

As you get close to the LSD cannabis strain, your nose is greeted by a powerful aroma. You should pick up a musky scent reminiscent of its Skunk lineage and sweet undertones. These charming fragrances manage to capture your attention and pull you in for a closer look.

Once the LSD strain hits your lips, its smells are only enhanced, wrapping around your tongue with earthy goodness. You’ll notice a sudden citrus tang that sticks to your pallet, leaving your taste buds with a slight lingering lemon aftertaste.

As soon as you fill your lungs with the smoke from the LSD strain, your mind begins to race. This mental high can sometimes feel overstimulating, especially for those who have a low THC tolerance. More experienced tokers will feel enhanced creativity and focus.

You should also notice a slight distortion to your senses, taking you on a mind-bending trip. While your brain is preoccupied, the LSD cannabis strain starts to recruit its indica genes, numbing your body.

The heavy stone and mental buzz from the LSD strain can sometimes enhance feelings of anxiety if you overindulge. Your best bet is to take your time and become accustomed to its effects, helping you avoid any negative reactions.

Thanks to its resilient parents, the LSD is a fantastic option for beginner cultivators. Not only is it resistant to disease and pests, but it can also endure a few weather changes as it matures.

The LSD strain grows well in both outdoor and indoor environments. If you plan on using a greenhouse, you’ll need to give each plant decent room as its lateral growth is extensive. Fully matured, your crop of the LSD will reach a height of two feet.

You may also require an odor filter to remove its pungent smell discreetly.

The LSD strain’s flowering time is between eight and ten weeks, resulting in a yield of 1.9 ounces per square foot.

Outdoor cultivators should plan on harvesting their cannabis by late September. This type of environment allows the LSD strain to yield up to 21 ounces per plant, providing you with pure psychedelic weed.

The LSD weed strain gets its mind-altering properties from two powerful cultivars. It’s a combination of Skunk #1, a classic cannabis type responsible for the euphoric buzz, and Mazar I Sharif.

The feminized version of the LSD strain is made up of 55% sativa and 45% indica, resulting in an almost perfectly balanced hybrid.

The autoflower version of this cultivar takes its genetics slightly further. Breeders crossed the LSD strain with Super Magnum Auto to speed up its flowering time. The only downside with this cannabis type is the slightly lower overall yield.

LSD seeds to buy near you

If our LSD weed review has got you excited about this cannabis cultivar, consider purchasing marijuana seeds. You’ll typically find three different options available, two of which are in our store. These packs are:

This cultivar is as beautiful as it is strong. You don’t have to take our word for it. Here’s what our customers had to say about their LSD strain seeds.

“The plant dumped. Not only did it produce a lb from one plant but the aroma and taste was next level. All seeds germinated. HIGHLY recommend.”

“All 6 seeds germinated, topped them, and they are now a big beautiful 6 ft tall 3rd week in July. Beautiful plants, never had such great seeds. Should start flowering in another 30 days. They will probably be 7 – 8 feet tall if they keep growing the way they are now. Can’t wait to try the buds. Grown outdoors here in Vermont.”

“I ordered 12 seeds and only planted 8. All 8 germinated and on their way. Will buy again for sure.”

“I have been looking for this strain for 30yrs.”

“Seeds all germinated right off the bat. Had a great yield and even better smoke.”

If you’d like to test out your cannabis tolerance, the LSD is your best choice. Many have indicated that its psychedelic high changed their overall perception of the world. Why not take the LSD strain for a ride and find out where it takes you.

Start your LSD Homegrown Diary and track your marijuana plant’s progress every step of the way. You can also join our Homegrown Forum to stay up to date with the best weed advice and tips from fellow growers.