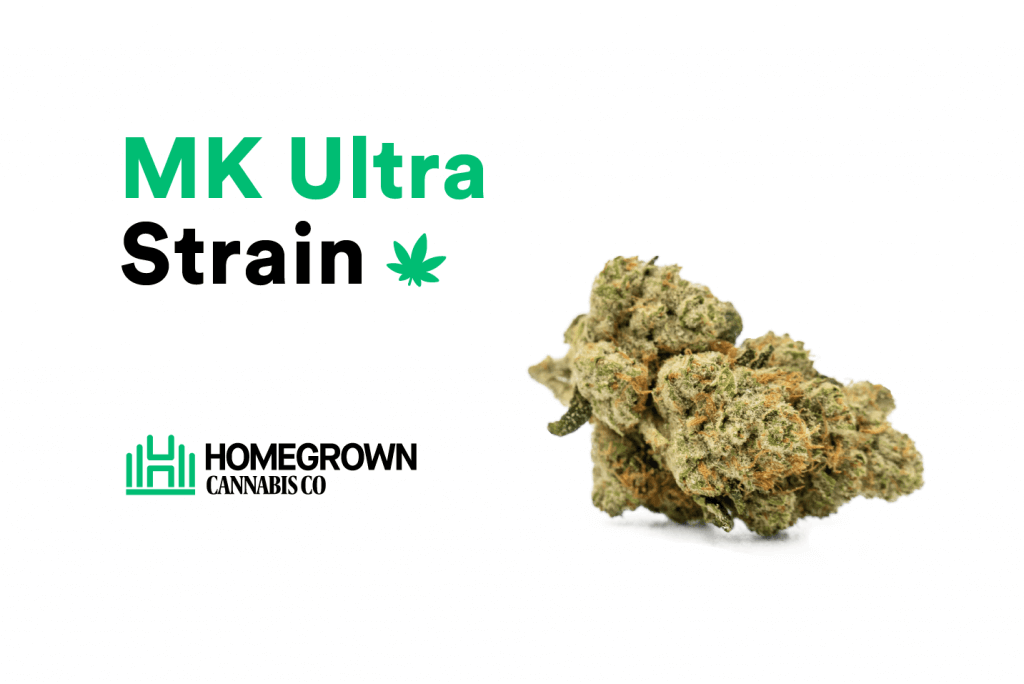 With its mind-numbing, hypnotic high, the MK Ultra strain was named after a clandestine CIA project conducted in the 1950s. Its indica-dominant, famously potent, and fast-acting effects stem from two contrasting cultivars—G13 and OG Kush.

Unlike those CIA experiments, this Cannabis Cup winner promises euphoria, relaxation, and a host of therapeutic benefits. The MK Ultra cannabis strain is also easy to grow, with a short and bushy structure, tantalizing aroma, and gorgeously gluey nugs.

Read on to discover why the MK Ultra is considered a world-famous hybrid and learn about its genetics, flavors, effects, and harvest potential.

The MK Ultra strain, or MKU, is also known as MK Ultra OG. Before we give you all the juicy details, here are its vital stats:

The MK Ultra marijuana strain has a dynamite reputation for being one of the world’s most potent indica cultivars. It was originally crafted by T.H. Seeds, who crossed an OG Kush female from JoshD Farms in Los Angeles with a G13 male from Barney’s Farm in Amsterdam.

The result turned heads, melted bodies, and bent minds, and the MK Ultra has remained a veteran favorite ever since. It even won first place in the 2003 High Times Cannabis Cup and second place the next year.

Newbies and experienced tokers should proceed cautiously because this strain is hard-hitting, fast-acting, and rich in THC. Like a hot bath on a cold day, one hit will relax your muscles —and your mind— evaporating tension, stress, and pain.

With its OG Kush genes, the MK Ultra strain produces a slight euphoric buzz, clearing the cobwebs before G13’s indica traits kick in. As inner peace and outer ease take hold, your eyes will grow heavy as your mind drifts off, beckoning you to dreamland.

It is best kept for nighttime use or when you’re ready to get comfy and mellow out for a while. It’s also a remarkable aid for conditions like PTSD, anxiety, stress, insomnia, loss of appetite, and chronic pain.

When it comes to taste and aroma, the MK Ultra strain is as mysterious as its namesake.

The intense fragrance reminds one of wildflowers and pine woodlands while an earthy sweetness dances on the tongue. Some users also pick up notes of fuel, coffee beans, and citrus.

The MK Ultra strain grows into a small, wide, and bushy cannababy with luscious, elongated leaves. Sunset-colored pistils adorn the sticky nugs, thickly coated in resin and dusted in trichomes. You can expect to harvest them in about 8–10 weeks.

As a beginner-friendly cultivar, this strain is unfussy and resistant to mildew and molds. Its small stature makes it perfect for indoor setups, yielding about 10–12 ounces per square meter. With the Sea of Green method, you can maximize your harvest.

Outdoors, the MK Ultra weed prefers a Mediterranean-like climate with plenty of sunshine and mild winters. It’ll usually be ready to harvest around late September to mid-October. In optimal conditions, you can expect about 5–6 ounces of gluey nugs per plant.

The MK Ultra boasts an iconic lineage with a hint of mystery. While OG Kush is an established titan, G13 is the stuff of urban legends.

Here’s what the MK Ultra strain’s family tree looks like:

MK Ultra seeds to buy near you

If you’re eager to grow your own supply of the MK Ultra weed, then you’ll need premium quality cannabis seeds, like the ones you’ll find at Homegrown Cannabis Co.

Here are the most popular MK Ultra strain variants:

Want to mix things up a bit? Here are some crowd favorites rivaling the MK Ultra strain:

Experience the magic of the MK Ultra strain

The MK Ultra strain is a potent juggernaut that’ll take you to a worry-free and blissful dimension before dropping you off at Lala Land. With its sweet, intriguing aromas and thickly coated nugs, it’s hard to resist growing your own stash. So, go for it!

Besides our top-tier MK Ultra weed seeds, our Homegrown Diaries will help you achieve a glorious harvest. You’ll find everything from expert guidance to first-hand accounts.

You can even track your progress and share your success by creating your very own MK Ultra Homegrown Diary.

If you want to spark a conversation or drop some wisdom, feel free to hang out at our Homegrown Forum.

We’d love to see you there!