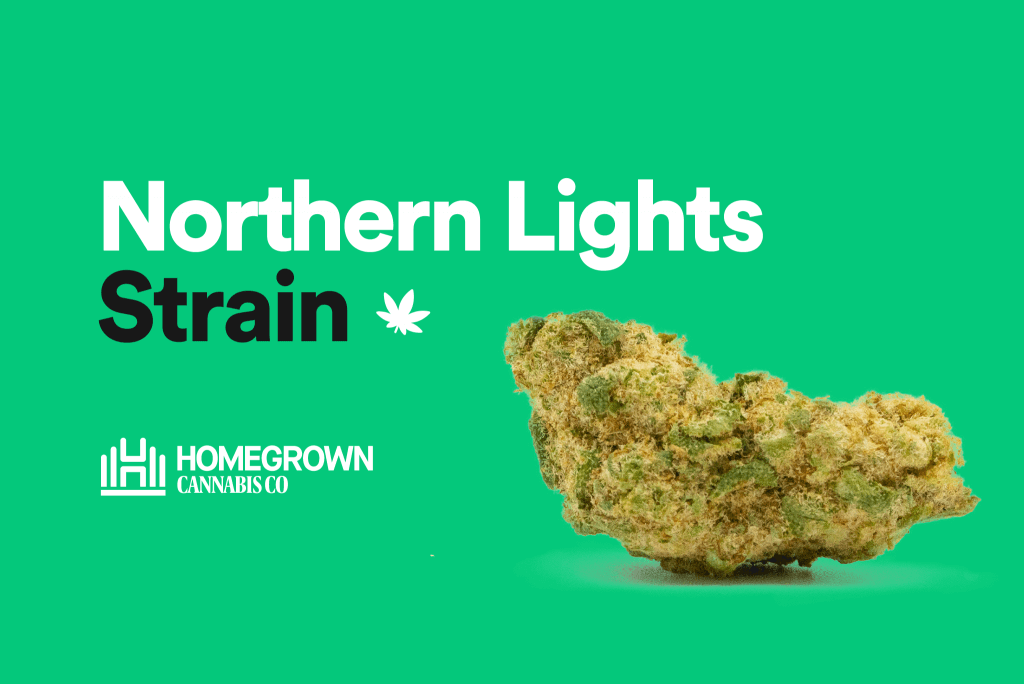 Often used as the benchmark for quality indicas, the Northern Lights strain remains one of the most awarded cultivars in the world. It’s offered users a cerebral high since the 70s, leaving them gazing into the universe with a smile.

While its origins remain shrouded in mystery, growing the Northern Lights strain is uncomplicated. If you want to learn more about this dazzling marijuana type, keep reading.

We’ll provide you with everything you need to know, including how to cultivate it at home.

Just because it’s easy to grow, that doesn’t mean you shouldn’t approach the Northern Lights strain without caution. It can send even the most seasoned tokers straight to the couch.

Before we start investigating this regal cannabis, it’s worth seeing the Northern Lights strain info at a glance.

The Northern Lights strain stays true to its moniker, displaying dense buds with green and yellow hues. The colors seem to flow into one another, creating a dazzling flower coated in sticky white trichomes.

Its brilliance continues as it seizes your senses. Dominated by myrcene terpenes, the Northern Lights weed strain gives off pungent aromas, both sweet and spicy. You should notice an overwhelming conifer smell, very similar to pine trees.

As soon as you inhale, your taste buds explode with a smooth, minty tang. Its mouthwatering flavors become slightly spicy, with a resinous smack that stays on your pallet long after you exhale.

Once it enters your lungs, the Northern Lights strain affects your mind first, creating a high that fills you with joy. This buzz makes its way down your body, elevating your mood to pure bliss.

You should start to feel the indica genetics take over, producing a calm that soothes your muscles. There’s no need to move when under the Northern lights strain effects; allow your body to relax and drift off to sleep.

The benefits of the Northern Lights cannabis strain can also help those seeking medical treatment. It’s offered respite to those with depression, chronic pain, and stress. What’s more, its sedating effects have proven to treat insomnia.

Northern Lights strain seeds are incredibly robust and take mistakes from beginners in their stride. It usually reaches heights of five feet, wherever you choose to plant it, but it truly thrives in a greenhouse environment.

Although it’s highly resistant to pests, you’ll want to ensure that you provide adequate ventilation. It would help if you also kept your crops manicured as this will prevent any mold from starting in its bushy interior.

Given the Northern Lights strain’s flowering time, outdoor growers should plan on sowing their cannabis seeds in April. This will give your plant plenty of time in the sun, allowing it to produce a yield of 21 ounces by late September.

If you intend on going the indoor route, you no longer need to worry about the seasons. Instead, you can focus on creating the perfect Mediterranean climate to produce yields of 1.6 ounces per square foot.

While the Northern Lights strain’s THC levels average 18%, it’s possible to increase this up to an incredible 33%. You’ll need to pay close attention to its nutrients levels, applying the right fertilizer at every growth stage.

As we’ve mentioned, nobody truly knows what the Northern Lights strain genetics are. The leading theory tells a tale of these marijuana seeds first appearing near Seattle. They surfaced again in the Netherlands, gaining a massive following.

Northern Lights seeds to buy near you

Due to its popularity, finding Northern Lights strain seeds is uncomplicated. The trick is locating a reliable source that provides the highest quality. Seed banks like Homegrown Cannabis Co. insist on the best, offering you seeds in three types:

Is there anything else you want to know? Are you after a specific piece of information about this cannabis celebrity? We’ll finish our Northern Lights review by answering the questions we frequently hear from the community.

Is Northern Lights indica or sativa?

The Northern Lights strain is indica-dominant. Despite having a landrace sativa parent, this full-body slammer has only 5% sativa genes. This uplifting dash boosts your mood while keeping your body in a zone of warmth and pleasure. The other 95% are pure indica, therapeutic, sedating, and supremely relaxing.

Is Northern Lights a strong strain?

This relaxer is moderately strong. It won’t knock your socks off, but even seasoned tokers will feel the effects after several puffs. The Northern Lights strain THC levels stand at 18% on average, while its CBD contents remain minimal. That way, it sends you on a gentle yet powerful psychoactive ride.

Is Northern Lights a good strain to grow?

Growing the Northern Lights is an effortless and superbly rewarding experience. Its indica heritage makes its herbs relatively compact and incredibly resilient against pests and disease. All you need to do is commit to regular trimming and excellent ventilation. You’ll get abundant harvests for minimal effort.

The Northern Lights marijuana is among the most popular and highest-quality cultivars in existence. It’s been rocking the 420 scene ever since it emerged in the 1980s, showcasing the best of indica cannabis to the entire world. Its gold medal from the 1990 Cannabis Cup proves this top-shelf quality.

Is Northern Lights a high-yielding strain?

The Northern Lights yields are very high in all environments. Indoors, each square meter of your tightly-packed grow room produces over 17 ounces of top-shelf weed. Harvests get even better in outdoor conditions. Late September brings more than 31 ounces of sticky buds per crop.

What is the Northern Lights strain good for?

The Northern Lights is a favorite among medical and recreational communities for its stress-busting, mood-elevating, comfort-bringing qualities. Either way, this cultivar is best for nighttime use. Have a toke to wind down, relieve tension, and rediscover a love of life. Have a restful night and wake up feeling your best.

How does Northern Lights strain make you feel?

The Northern Lights effects touch your physical and mental being, making you feel content and completely comfortable. Your mind is free of concern and negativity, your mood positive, and your focus on enjoyable activities. The body relaxes into a deep, warm buzz that turns into sleepiness and peaceful slumber.

Why is the strain called Northern Lights?

This strain got its evocative name after Aurora Borealis. The two phenomena share awe-inspiring qualities and deep ties to mother Earth. An inhale of the thick pine smoke transports you into a boreal forest. Close your eyes and let the dancing lights erase your mundane troubles.

Who created the Northern Lights strain?

For all Northern Lights info we have, its true creator remains shrouded in mystery. Most sources list a Seattle-based breeder known only as ‘The Indian.’ Other canna-buffs claim that this cultivar originated somewhere in California. Those reports claim that the Indian was simply the recipient of this amazing creation.

How old is the Northern Lights strain?

The Northern Lights weed is at least 50 years old. Its vague origin story doesn’t allow us to pinpoint (and celebrate) its birthday. All we know is that the cannabis world has been aware of this cultivar since the ‘70s. It reached fame and became commercially available after 1985.

Is Northern Lights an exotic strain?

The Northern Lights might’ve been exotic when it first came to existence, but it’s since become a household name across the US. Every toker worth their salt knows about this marijuana marvel. Those who haven’t already smoked it have its name on their must-try lists.

Is Northern Lights a smelly strain?

The Northern Lights smell is powerful and permeating, but we wouldn’t call it stinky. Having an abundance of myrcene makes these herbs burn into vegetal-smelling smoke, reminiscent of a pine forest. Citrus and skunk scent notes are less prominent, adding an interesting but not overpowering quality to the bouquet.

Your one-way ticket to see the Aurora Borealis

Trying the Northern Lights strain for the first time is as beautiful as seeing its namesake. The best part is that you don’t have to leave your home to indulge in this sensation.

If you’re accustomed to this cultivar, consider growing one of its children, like Super Silver Haze.

No matter which seed option you choose, make sure you join our Northern Lights Homegrown Diaries. You’ll get friendly growing advice and the option to keep track of your crop.

You can also subscribe to our Homegrown Forum for everything cannabis-related, including growing tips and tricks.