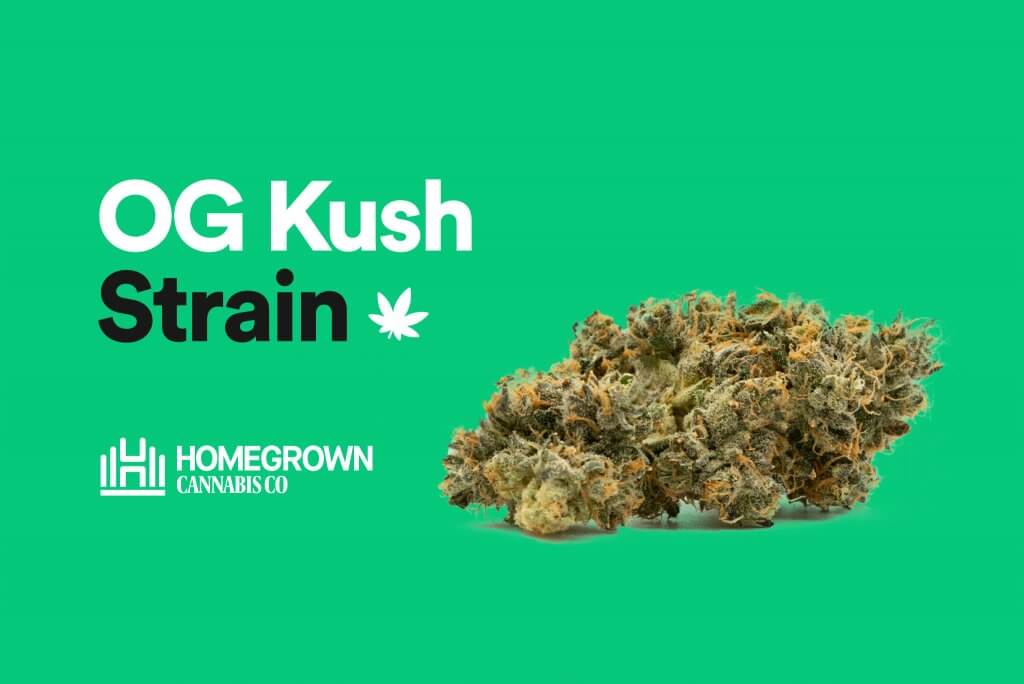 As a hybrid, the OG Kush strain consists of 25% sativa and 75% indica. Users partaking in the magic of the Original Gangster of Kush will find themselves floating on a fairly intense cerebral high combined with euphoric and calming relaxation.

With an array of intricate earthy scents coupled with hints of citrus, spice, and lemon flavors, this strain will start you off on a hardcore trip, which will gradually fade away, allowing you to slip gently into a deep, restful sleep.

Regardless of its origins, the OG Kush strain is the West Coast ganja varieties’ genetic backbone. Ever since this weed was crossed with “the Bubba” in the mid-’90s to create the Bubba Kush strain, it became a worldwide staple used to propagate various famous phenotypes, such as the SFV OG Kush strain, 8 Ball Kush strain, and Tahoe OG Kush strain.

Read on to find out everything there is to know about the Kush strain and start growing this infamous weed variety yourself.

Before we get into our OG Kush strain review, here’s a summary of her key elements:

The OG Kush strain is a hybrid originally cultivated by crossing a Northern Californian plant (popularly believed to be Chemdawg) with a Hindu Kush strain from Amsterdam during the early ’90s. The result boasted a unique terpene profile with a complex, compounded aroma, that keeps stoners worldwide coming back for more.

When you take in the fragrance of the buds, you can clearly distinguish a pine or earthy evergreen scent, with a pungent diesel note lingering beneath the rich herbal odor. When lit up, it will bring about a spicy aroma, underlined with a hint of woody nuance and citrus sourness.

Nicknamed “The Original Gangster,” lighting up will hit you fast and hard. You’ll start feeling the effects almost immediately and you can rest assured that your high will last for several hours. The sativa influence typically hits you first, creating a euphoric head buzz, but don’t let the happy mood mislead you, it’s true nature will soon become remarkably apparent.

When the full effects of OG Kush hits you, you’ll find yourself couch-locked and sinking into a blissful world of deep relaxation. As the initial cerebral high dwindles you’re bound to become drowsy, eventually drifting off into never-neverland, making it perfect for those who have trouble falling asleep.

Be warned! OG Kush is known to cause a severe case of the munchies, so, before you light up, make sure you have enough snacks conveniently lying around within arms length.

With THC content ranging between 20 and 23%, novice smokers should take care as overly enthusiastic use can become a bit much. When you light up, start with a couple of tokes and gradually increase the dosage as needed.

Growing the OG Kush strain at home with our fast, auto, or feminized seeds is pretty straightforward. Topping (trimming broad fan leaves near the plant’s top) works well for this weed, as it allows fresh air and light to reach the flowering nodes situated on the lower branches.

Raising this strain in a temperature and humidity-controlled environment indoors will result in the best and most favorable yields. The crop can’t be left unattended for too long because it’s prone to developing mold and powdery mildew due to its dense foliage. To prevent this, improving air circulation by installing an oscillating fan and pruning and trimming is essential.

Under the right conditions, the OG Kush strain can also thrive outdoors, especially if placed in an area with ample sunlight. The plants are typically ready to harvest after seven to eight weeks of growth, and you can expect between 12.3 and 21 ounces of dried bud.

Outdoor growers need to keep in mind that the OG Kush strain is highly aromatic and not the stealthiest choice if you’re growing in secret.

Nuggets produced by this strain’s seeds are usually quite dense and medium to large. The leaves are frequently yellow-green, but specific phenotypes, especially in colder regions, may display hints of violet. In contrast, the buds, with their bright orange pistils, are tremendously appealing to the eye.

The buds, shimmering with diamond-like trichomes, tend to be exceptionally sticky, and Homegrown Cannabis Co. recommends that you put it through a grinder before packing a pipe or rolling a dube.

First cultivated by Matt Berger in Florida, the OG Kush strain has achieved worldwide fame. It became the backbone of West Coast cannabis genetics and fathered phenotypes such as the Obama Kush strain, Blackberry Kush strain, and Bubba Kush strain.

Despite its widely acclaimed and highly regarded lineage, this strain’s origins remain cloaked in mystery. The most popular beliefs are that this strain is a combination of:

OG Kush strain seeds to buy near you

If you’re itching to grow your own OG Kush, visit the Homegrown Store today for the highest-quality cannabis seed specimens available:

Check out our OG Kush strain review from OrganiGrower. He details all there is to know about this strain, from the look and feel of the bud, the taste of the toke and the all-important growing information:

So, we’ve covered most of what the OG Kush strain entails, but there might be a few remaining questions. Below we answer a few of the more common ones.

Is OG Kush sativa or indica?

OG Kush is a hybrid strain with more indica leaning properties. The OG Kush strain genetics play a key role in the effects it induces. It’s the offspring of Chemdog, Lemon Thai, and Hindu Kush. It inherits the initial uplifting and energizing aspects of Lemon Thai. The distinct indica traits occur after about an hour, relaxing the body and easing the mind.

Is OG Kush the strongest strain?

While the OG Kush marijuana strain is potent and has high levels of THC, it isn’t the strongest strain available. According to High Times, the top spot currently belongs to one of the cultivar’s many offspring—Godfather OG. The most powerful strain constantly changes as breeders develop new hybrids.

Is OG Kush an exotic strain?

Yes! In 420 circles, the word exotic refers to a strong cultivar, and the OG Kush cannabis strain is potent. It contains an average of 20% THC, and the effects hit almost instantly after one or two tokes. The buzz is intense, causing a wave of euphoria and calm.

What strain is similar to OG Kush?

If you’re a fan of the OG Kush strain, you’ll also enjoy related cultivars like Bubba Kush and True OG. They have similar effects, and each contains an intriguing terpene blend. Both cultivars also contain pretty high THC levels.

Is OG Kush the best strain?

The best marijuana strain is a debated topic subject to user preferences. While the popularity of the OG Kush strain is clear, the criteria for the ultimate cultivar vary. While some tokers may look at the overall qualities, others assess based on the potency, flavor, or effects. Certain users prefer landrace options over hybrids. Various preferences make it difficult to classify a single strain as the best.

What are OG strains good for?

Cultivars like OG Kush are excellent for both recreational and medicinal tokers. Users report that it offers therapeutic benefits and stress-relieving qualities. The OG Kush strain specifically relaxes you physically and mentally. Tokers also report that it helps with anxiety and other medical issues.

The strain OG Kush has fruity yet diesel fragrances that translate to the flavor. On the inhale, you detect powerful citrus notes with grassy undertones. As you exhale, you detect hints of skunk blended with the dominantly lemon flavor.

Time to grow your own OG Kush strain

Regardless of which strain you choose to start with, join Homegrown Diaries to share your experience and get OG Kush strain growing advice from novices and professionals alike.

The OG Kush weed strain is a time-honored favorite that even veteran stoners can’t resist. Kick-back, relax, light it up and let your inhibitions fly while you drift off in a gentle state of euphoria.

Join the Homegrown Forum to share your passion for the classics and stay in touch with the best growth practices and discoveries.

« Is Weed Legal in Florida?
LED Lights for Cannabis: 3 Types & 4 Mistakes You Should Avoid When Using LEDs »