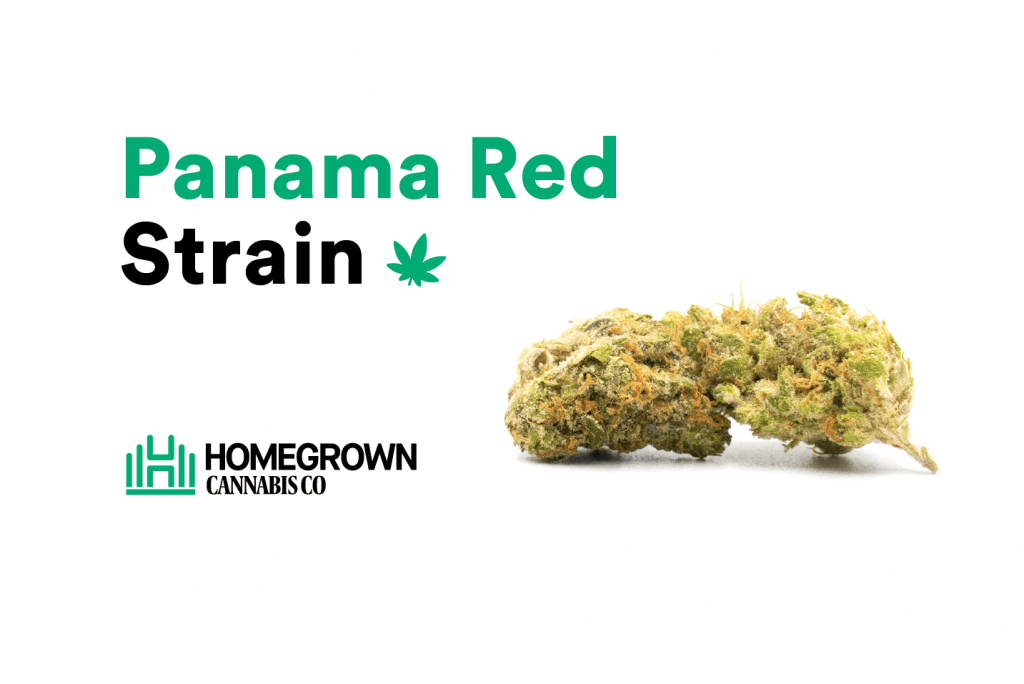 The Panama Red strain was the talk of the town during the 60s and 70s. Many considered it the best bud because of its considerably high THC content for the time. This classic landrace strain gets its name from the region it flourished and the reddish color on the shoots as she nears her flowering stage.

Sure, the name, Panama Red, leaves very little to the imagination, but there’s more to it than meets the eye. In this Panama Red strain review, you’ll learn all about its benefits, evolution, effects, how to grow, and much more.

Let’s first highlight the key attributes with some Panama Red strain info below.

From pictures of Panama Red, it’s easy to see how it got its name. The delightful medley of colors makes you want to try it. A quick search on YouTube for Panama Red shows you how incredibly tall this weed becomes.

The Panama Red strain is ideal for veterans and inexperienced stoners who seek moderate THC content and low CBD in their bud. It’s great for daytime use as it relaxes you to cope with stress and anxiety. This strain also helps with headaches and migraines.

The Panama Red is what grandma and grandpa yearned for when they were young. This classic, pure sativa strain provides a soft cerebral high that gets your creative juices flowing for inspiration and intimacy. Overall, the Panama Red weed strain provides a potent brain effect that can produce psychedelic visuals.

Don’t underestimate the Panama Red weed strain when you consider that it only offers up to 17% THC content. This quantity might seem low, but you’ll be taken aback by the strong effect that lingers on for long periods after consuming the activated ingredients.

When you open a jar of Panama Red marijuana, the aroma of pine, lemon fuel, and earthy tones fills the air. When indulging in the bud, flavors of lemon tart, herbs, grapefruit, and spicy ginger swirl over the palate.

The Panama Red marijuana strain has delightful terpenes and the flavor lures enthusiasts to overindulge in the bud. The smoke is clean and clear thoughts enter the mind rapidly with every puff.

Be warned that if you overindulge in Panama Red marijuana, it’ll take you for a wild ride. Therefore, avoid this strain if you suffer from anxiety. Panama Red can bring about bloodshot eyes and cottonmouth.

The Panama Red is a pure sativa landrace strain that’s very rare nowadays. This weed becomes tall and thin with long internode and thick stems. During the flowering phase, the Panama Red strain leaves and stems can have a reddish and brownish color. Long thin hairs (pistils) with a reddish-pink hue also cover the long shoots.

Outdoors, the Panama Red marijuana strain is ready to harvest towards the end of October. This weed enjoys sunny days, humidity, and warmth—a tropical environment similar to that of Panama. Optimal growth conditions are between 75-90° Fahrenheit and relative humidity of 40–55%.

The Panama Red weed strain’s a heavy feeder, and for her to grow quickly and healthy, you’ll need to supply a generous amount of organic nutrients through all her stages of development.

The Panama Red marijuana plant can get to 6.5 ft in height, so expect to look up a lot. You can maintain an even canopy when growing indoors using the low-stress training screen of green (ScrOG) method.

As she blossoms to a tall and dense cannabis plant, you’ll need to decouple the canopy and branches from time to time to allow light and air to reach the bottom. It’s probably best to cultivate Panama Red weed outdoors where the conditions are just right or in a warehouse with a controlled environment for an even greater yield.

Panama Red weed is quite resistant to tropical insects, pests, and diseases. However, it’s susceptible to foreign pests and fungi. Therefore, make sure to clean debris and never introduce foreign materials such as clones to your garden.

What strain is Panama Red? Well, Panama Red is a landrace marijuana strain. This term (landrace) means it’s one of the founding fathers of modern times marijuana cultivars. This strain is a product of millions of years of evolution.

The Red Panama appeared well before the marijuana industry took off. Most people indulged in the original Panama Red cannabis strain for medical, spiritual, and recreational use. It was a true legend kept by a select group of breeders.

However, once the marijuana market became profitable, breeders began to create hybrids that flower faster, deliver greater yields, and offer even more benefits. As a result, landrace marijuana like the Panama Red began to disappear slowly.

Panama Red strain seeds to buy near you

If you want to resurrect one of the most respected sativa strains during the hippie era, then we hate to break it to you. It’s difficult for new generations to enjoy this pure cannabis cultivar because these weed seeds are limited, and it’s a challenge to find the original Panama Red strain seed anywhere in the world.

Moreover, the Panama Red strain flowering time makes it a deterrent to growers. Therefore, commercial growers will have more of an interest in it than private farmers. Novice farmers also have difficulty caring for the crop because it only thrives in tropical and sub-tropical climates.

Fortunately, the Homegrown Store boasts the best seeds available online, so you can get other landrace breeds with a similar profile.

Why not try another strain such as Durban Poison Feminized—a landrace strain with similar attributes to Panama Red marijuana in potency but is far easier to grow in more environments.

Another great option is the Panama Feminized strain, which is an offspring of Panama 74, Green Panama, and the landrace Colombian strain Punto Rojo. As a result, the Panama strain shares many similar qualities to Panama Red, key among them being a 100% sativa breed.

A blast from the past

The Panama Red marijuana cultivar is an exotic and potent strain that provides a psychedelic fever of pure sativa. Unfortunately, It’s challenging to grow, even for professionals, but if you’re determined and ready for the challenge, Panama Red treasure awaits. Don’t forget to start your Panama Red Homegrown Diary to track your progress.

Subscribe to our Homegrown Diaries to engage with other cultivators and get expert advice on making the most out of your seeds. Check our Homegrown Forum to stay up to date with the latest news, trends, best practices, upcoming strains, and that’s just scratching the surface.