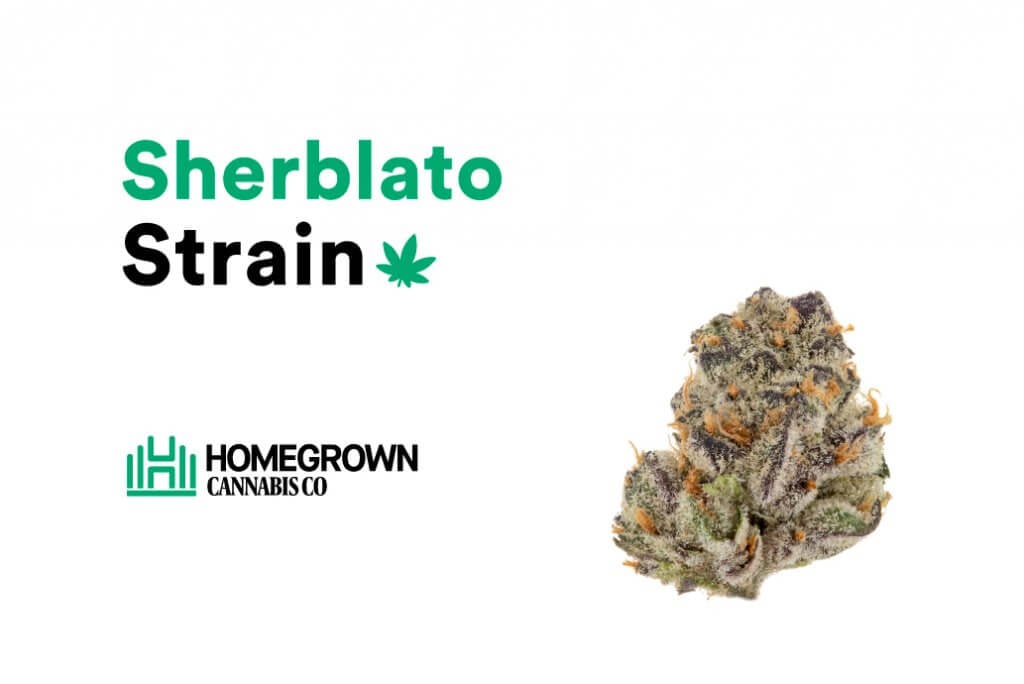 Introducing the new kid on the block, the Sherblato strain. This potent sativa-dominant hybrid is making waves in the marijuana world. Its impressive genetics and juicy flavors provide irresistible traits. It’s a favorite among tokers, with cultivators jumping on the bandwagon.

The effects of the variant provide a mixture of blissful euphoria and mental motivation. In addition, its reported pain relief properties make the herb well sought after by medicinal tokers.

As a newcomer, Sherblato strain info is still developing. Let’s get into everything we know about the tasty cultivar.

As its name suggests, Sherblato combines Sunset Sherbet and Gelato. The delicious strain brings a ton of flavor with a potency punch and long-lasting highs.

Its fast-acting effects send you into a cerebral buzz that results in full-body relaxation, with joyous thoughts flooding your brain.

Is the Sherblato strain indica or sativa? To better understand the statistics of the newbie, we’ve broken down all we know about this hybrid herb:

Sherblato strain reviews show that the plant leaves tokers feeling stoned, happy, and relaxed. Its chilled-out effects have you feeling at ease without knocking you out. After a busy day, a couple of tokes can calm your mind and usher you into an eased state of euphoria.

The strain also increases mental focus; regular tokers recommend getting stuck into a good book after a few puffs. You’re guaranteed a fast-acting, long-lasting high that leaves your body buzzing on cloud nine.

Thanks to Sherblato’s THC percentage of around 22%, the plant is recommended medicinally. It displays excellent relief properties, easing chronic pain and severe migraines. If you have stress or anxiety, a few tokes of Sherblato reportedly wash your worry away instantly.

As with most cannabis strains, when overindulged, effects can vary. If Sherblato is smoked in excess, tokers could feel over-energized or deeply sedated. Consume in moderation and remember to stay hydrated.

With a genetic makeup like Sherblato’s, the variant had some big shoes to fill concerning flavor. Thankfully, it stepped up.

The strain boasts an aroma that has tokers licking their lips. Waves of citrus appear before lighting up. When lit, you can expect a mixture of sour, sweet, and nutty tastes.

After the burst of tropical fruitiness, an earthy, fuel-like aroma takes over. The pungent yet pleasant smells of the Sherblato weed strain are somewhat strong.

The strain flourishes indoors, outdoors, and in greenhouses. If you choose the latter, topping and training are generally necessary. Sherblato prefers a warmer climate with plenty of airflow and maximum light exposure.

For outdoor cultivation, plant your weed seeds during warmer months. Cannabis plants can survive cooler weather but grow optimally during summer, with harvest in October.

The buds are bright green with stunning orange pistils and slight violet hues. The trichomes are covered in crystals that highlight the purple reflection. To extend this lilac color, reduce temperatures during flowering.

Cultivators looking for high-potency effects should wait until the trichomes turn amber, typically around nine weeks.

Cultivators can expect a flowering time of 7–9 weeks. Indoor yields are around 14 oz./m2 and 19 oz. per outdoor plant.

As there are still unknown aspects regarding the growth of Sherblato, the strain isn’t recommended for novice cultivators. To grow crops with similar traits, check out Gelato autoflower seeds.

Sherblato’s parents are Gelato and Sunset Sherbet, two strains known for being stone-cold flavor bombs. Having these two cultivars results in incredible ancestry. Strains such as Durban Poison, Girl Scout Cookies, and OG Kush are also a part of the variant’s makeup.

Let’s take a look at the traits Sherblato inherited:

FAQs about the Sherblato strain

Do you still have some concerns after reading our Sherblato strain review? We’ve answered some frequently asked questions below.

Is the Sherblato strain indica or sativa?

Sherblato is approximately 70% sativa and 30% indica. A few plants have shown higher indica levels, depending on the cultivation method and phenotype. Some enthusiasts speculate that the strain is a balanced hybrid, which would make Sherblato’s indica and sativa content 50/50.

What strain is similar to Sherblato?

If you’re fond of this cultivar, you’ll enjoy its parent strains, Gelato and Sunset Sherbet. The classic Girl Scout Cookies also has similar traits to Sherblato.

Is Sherblato good for anxiety?

Sherblato reportedly provides effective relief from anxiety and stress due to its high THC content and sativa-leaning genetics. Medicinal tokers often turn to cannabis such as this for treatment related to these ailments.

Why is it called Sherblato?

The Sherblato strain’s name is a combination of its parent cultivars, Sherbet and Gelato. It’s fun and easy to recall.

Is the Sherblato weed plant mold-resistant?

A few reports identify this strain as having moderate resistance to disease. As a rule of thumb, always keep moisture levels moderate to low. With high water levels, crops are more vulnerable to mold.

These crops generally grow between 5–7 feet in height, but a few cultivators have reported taller plants. The leaves will present a dark green hue with moderate-sized buds by this time.