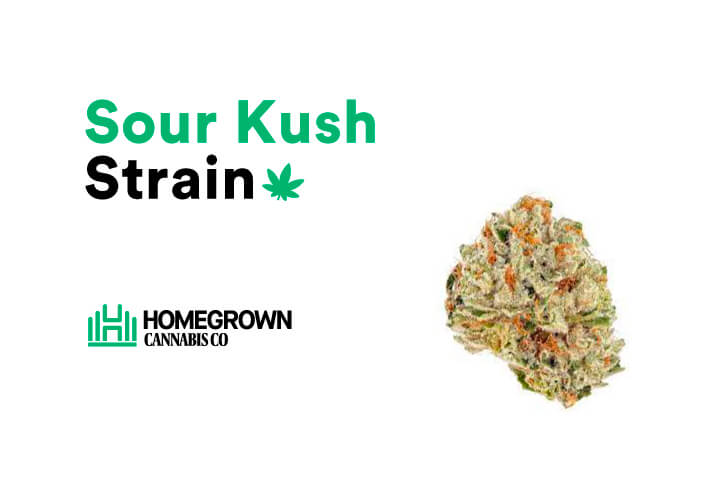 This stinky cultivar has a diverse following, ticking many boxes. For starters, the Sour Kush strain’s genetics are regal, with OG Kush and Sour Diesel making babies. The medical marijuana community is enamored by its therapeutic effects, which provide relief for numerous ailments.

Growers, and especially novices, love the Sour Kush strain’s simple grow process and bountiful yields. Join us as we learn more about this promising hybrid.

The Sour Kush strain can be very potent with THC levels up to 21% (and higher), so pay attention to your dosage to start. You’ll want to start slow.

Conversely, the positive effects of the Sour Kush present a real ‘feelgood’ flush. A headrush is for starters before a more focused brain jolt sends you on a creative whirlwind.

In an hour, that energy should wane, and a calm relaxation starts to pervade.

The Sour Kush weed strain can be utilized at the end of the day or even make your way through it. It’s also respected in the medical marijuana community for its daytime pain-killing effects.

The Sour OG Kush strain is used therapeutically to ease the debilitating effects of anxiety, chronic pain, depression, and stress.

Many adherents of Sour Kush note happiness and euphoria initially, likening it to their ‘first time.’ A number also relate strong cases of the giggles.

With Sour Kush weed strain, there’s potential for red eyes and cottonmouth, so keep eye drops and water or a tasty beverage handy.

The dominant terpenes in the Sour Kush strain define its taste spectrum. Myrcene is the most common terpene and holds earthy flavors. The Limonene terpenes are unsurprisingly citrusy, while the Caryophyllene presents peppery tones.

However, that’s not all. With such a highly odorous profile, you’ll not be gobsmacked to find the Sour Kush has a wide array of terpene types present on its Sour Kush buds.

First, you’ll have to decide whether you want regular, feminized, or autoflower cannabis seeds.

Sour Kush OG strain regular and feminized variants are photoperiod options, meaning they’re dependant on light cycles. Autoflowers are free from such concerns and flower automatically, regardless of the light schedule.

The plant is medium height, growing up to about six feet. The Sour Kush prefers a warmer, outdoor, temperate climate. This hybrid is, however, hardy enough to thrive in decidedly cooler and indoor climes too.

Sour OG Kush reaches full maturity somewhere between 8–10 weeks indoors and in early to mid-October outdoors. Yields can be heavy, but be warned of the potential pungence of your marijuana harvest—you can thank its momma Sour Diesel for that!

Outdoor grows can yield between 21–28 ounces per plant. Indoor growers can expect between 16–18 ounces of Sour Kush bud, per m².

Sour Kush strain seeds to buy near you

The easiest place to buy high-quality cannabis seeds is online at our Homegrown Store. Our best Sour Kush strain options are:

What kind of strain is Sour Kush?

The Sour Kush strain is the fabled offspring of OG Kush/Sour Diesel and a blend earning a legion of fans for its widespread flavors and effects.

Virtually idiot-proof when it comes to nurturing your crop, Sour OG Kush strain cannabis seeds yield a dank indica-strong crop. You can also expect your harvest to arrive with a generous yield.

Keeping a Sour Kush Homegrown Diary can help you keep track of your crop. Share your results and compare methods to maximize your yield. If you haven’t nabbed this cultivar yet, why not browse through our Homegrown Diaries for the one you have?

If you have further queries, remember to hit up our Homegrown Forum for in-depth analysis. You can also share your experiences with the greater cannabis community.

We’ve got libraries of information and years of knowledge waiting for you to delve into—so stick around!