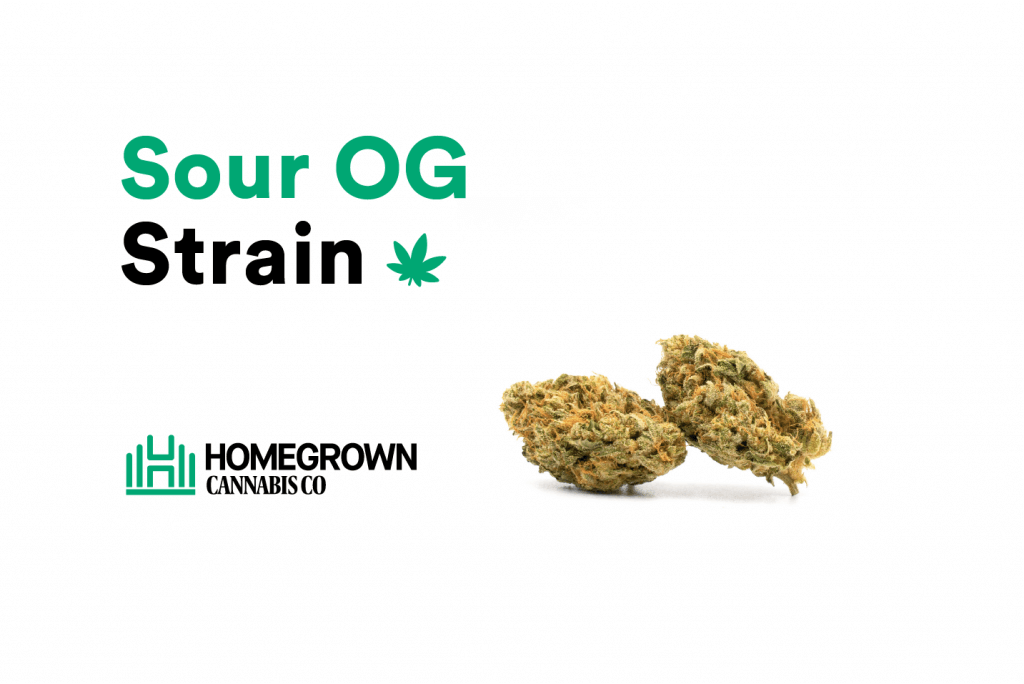 Paying homage to both parent plants, the Sour OG strain first hits you with Sour Diesel’s cerebral high while relaxing your body and mind with OG Kushs’ strong Indica blow. A single toke will give you a burst of energy, which is great for users on the go. A tad bit more will make you lethargic.

Medical users acknowledge this sour strain for its therapeutic effects. Recreational users love it for its relaxing high, without the sleepy effect that many pain-killing Indica strains induce.

We’ll explore this inviting hybrid in detail in this Sour OG review. You’ll find everything you need to know about its flavor, benefits, growth, effects, and more. Read on.

Sour OG is perfect for daytime pain relief. It sends your mind to a kaleidoscopic flight at first, then relaxes you with subsequent totes. You wouldn’t expect anything less since Sour OGs’ THC levels are at an impressive 22%.

The high is somewhere in between a Sativa and Indica buzz – providing the sensation of an active mind and calm body. It won’t drag you down, and you’ll still go on about your day-to-day business.

Patients appreciate the Sour OG strain because it offers various therapeutic benefits. Many attest to it being an effective treatment for pain relief and inflammation. The strain can also treat mood disorders and depression.

One of the best times to use Sour OG is right before meals. It stimulates appetite so that users can eat wholeheartedly. This Sour Diesel and OG Kush hybrid is also a go-to choice for artists since it inspires creativity.

Sour OG weed is very pungent featuring a sour scent reminiscent of freshly squeezed lemons, pine, and gasoline, with hints of earthiness cutting across. It has a bit of both parent strains’ odors. However, the fragrance is subtle compared to that of the Sour OG strain parents.

The diesel scent from Sour D and earthy Kush tone smacks you in the face when you open up a bag. Its aroma pulls you in, making you want to light it up right there and then.

We recommend you store Sour OG weed in a tightly sealed smell-proof container – unless you want everyone within a block of your house to know about your secret stash.

When lit, the Sour OG strain releases a fume with strong pine and diesel fragrance. The taste consists of a sour pine overtone and a lemony aftertaste, leaving an impression that lasts for hours.

Sour OG goes down smoothly, offering a pleasant, uplifting buzz that settles into a relaxed sense of wellbeing. Its earthy flavor tickles the throat, so you could likely cough at the beginning of your session.

The Sour OG strain has an impressive growth profile. It features the sturdiness and appearance of the OG Kush. This Sour Diesel and OG Kush hybrid is also quite compact, making it the perfect strain to grow indoors. It responds well to solid and simple hydroponic systems.

Sour OG weed thrives in warm and dry climates. It blossoms into a fragrant plant and matures in mid-October, generating up to 64 ounces of buds per plant.

The Sour OG strain produces dense buds, and its foliage can bear moisture. So if left unattended, this marijuana plant can develop mold or mildew, inhibiting its growth. However, it hardly needs early topping.

By utilizing the sea of green method (SOG), you can plant many Sour OG strain seeds to maximize space while improving light distribution to produce more budding sites. As a result, you’ll get a fantastic yield of frosty, dense, uniform, and well-structured buds, like with any OG Kush. An abundance of trichomes and thin, bright orange pistils will cover the cone-shaped buds as well.

Breeders of the Sour OG strain sought the best of both worlds. An uplifting cerebral effect with calming sensations. The result is this well-balanced and iconic hybrid of Sour Diesel and OG Kush, with a 50:50 ratio.

Sour OG strain seeds to buy near you

If the Sour OG Strain has you hooked, why not buy a pack of seeds at our online store, which ships your stash discreetly. Here are three types of seed packs you can get today:

A day to remember

Sour OG invigorates and improves your creativity. The buzz, aroma, and taste are unlike anything you’ve felt before. This popular sour weed strain won 1st prize in the 2011 High Times Medical Cannabis Cup in the hybrid category.

Suffice to say, this Sour Diesel and OG Kush combo bring all the boys to the yard for a calming and enjoyable smoke session. Consider joining our Homegrown Forum to connect with other stoners and growers who use this award-winning strain. See what others are up to with their strains and document your progress by signing up to Homegrown Diaries.