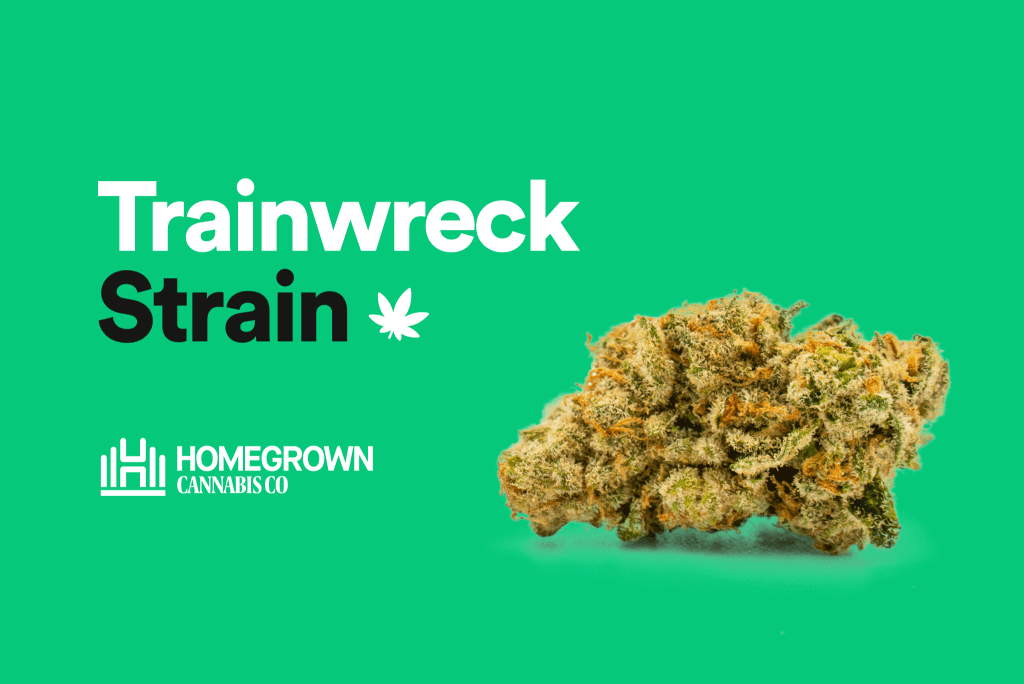 A sativa dominant hybrid, Trainwreck strain creates a powerful mental high. The wood and lemon terpene profile create a unique buzz that both energizes and calms you down. Though often used for wake-and-bake, some prefer its reflective qualities.

With an origin in Thai and Mexican sativas, the Trainwreck marijuana strain is a force of its own.

Although it hits like a train, it’s covered in soft, warm pillows and takes away all the pain. Our extensive review of this weed breed allows you to make an informed decision when you buy the Trainwreck Strain.

The Trainwreck weed strain name could concern some, and even though it’s entirely accurate, there’s more to it. Not all users experience the same effects or at the same speed. Everyone rides the train at their own pace.

To save you the time of searching everywhere for Trainwreck strain info, we decided to lay it out for you:

Often referred to as the Purple Trainwreck strain, this gorgeous ganja was first grown in California.

A 70/30 Sativa/Indica hybrid of Lowland Thai and Mexican Sativa and Afghani Indica, this baby has been around since the 80s. Not only is it from the grooviest time in history, but it also has a killer origin story.

Grown by brothers in secret in Arcata, the entire crop, except for one plant, was destroyed after a nearby trainwreck brought police to the area. Sometime later, someone revived clones to preserve the Arcata Trainwreck strain.

Wake and bake for the best results. If you have insomnia or wake up feeling like going back to bed, this one’s for you. The terpenes give a fresh lemon zest and a full, earthy, pine flavor reminiscent of sprawling on the grass.

Like all good weed, having something to nibble and some water nearby is recommended. Whether you’re running errands or want to have some creative stimulus, Trainwreck gives a little smack in the right direction. If you’ve got time on your hands and want to ponder your existence, it’ll help with that too.

It offers a head high like no other if you need to focus on a task at hand. The Blueberry Trainwreck strain is notable for the massive sativa dominance. Similar to the Trainwreck OG strain, it induces euphoria and an unmatched energy boost.

If you’re prone to paranoia when smoking weed, the Indica dominant Blackberry Trainwreck strain might be more your speed. With that said, be prepared for some heavy couch-lock. If you’re smoking at night, get the popcorn and movie ready because you’re going nowhere.

One of its best features is how easy it is to grow Trainwreck at home. Feminized and autoflowering Trainwreck strain seeds guarantee cultivars a fully matured crop in less than four months. The hybrid nature of the cannabis plant increases photosynthetic abilities, allowing faster, more significant growth.

The Trainwreck flowering time varies between 8 to 10 weeks. Depending on your growing method, you might need support twigs. The colas can grow to enormous size under the right conditions.

Regular trimming keeps your cannabis plant prioritizing the right areas. If dead leaves are hanging around, remove them. Even so, your Trainwreck cannabis strain could grow up to a magnificent 210 cm (6.8 Feet).

The puffy, delicate flowers are relatively small and pack a punch of up to 25% THC levels. You can immediately identify the sativa side of the weed plant by the bright green leaves and height. Some tropical Trainwreck strains can grow up to 7 feet. That’s taller than most basketball players!

So, let’s get to the good part!

How to grow the Trainwreck Strain

There are a few rules you need to follow if you want a high Trainwreck yield:

As soon as your Trainwreck strain yield is ready, you can start harvesting. To prevent the leaves from sticking to the colas, do the trimming before you dry them.

As a sativa dominant hybrid, the Trainwreck strain has genetic origins from basically all over the world. At some point, cannabis plants or seeds traveled from Afghanistan, Thailand, and Mexico to unite into a joint trinity.

The flowers are delicate, dense, and look a bit like a trainwreck because of their structure’s jaggedness.

Many people ask what strain is Trainwreck. For you and everyone else, we’ve gathered the necessary info on the Trainwreck strain genetics:

Trainwreck strain seeds to buy near you

Well, if our Trainwreck strain review gives you the urge to start your garden, look no further. The Homegrown Store has some of the best weed seeds on the market, such as :

Our client reviews about Trainwreck are a smash:

Rodonna
So far all is great, the seeds came and I only purchased 4. 3 germinated in 24 hours, 1 to the whole 48, lol. But they all look good in the little greenhouse I have them in. I did not expect them to grow so fast. The 3 I planted yesterday already have a white something coming out of the ground. I just notice this is not a beginner’s plant, so now I am praying I get flowers. lol. I will give you an update in a few days. Can’t wait for the flowers!!!!!!

Whichever Trainwreck marijuana strain you buy, it’s a good idea to keep a “Trainwreck Strain Diary.” By subscribing to Trainwreck Homegrown Diaries, you can start your own or read shared diaries to avoid pitfalls.

The Trainwreck weed strain is easy to grow and enjoyable for everyone that gives it a try. Veterans and newbies alike can cultivate impressive buds.

If you’re feeling a bit overwhelmed. The Homegrown Forum has all the latest news, tips, and tricks to help you along the way. On top of that, you could make new friends that aren’t weed plants.