Cannabis Sugar Leaves: What Are They And How Can You Use Them? 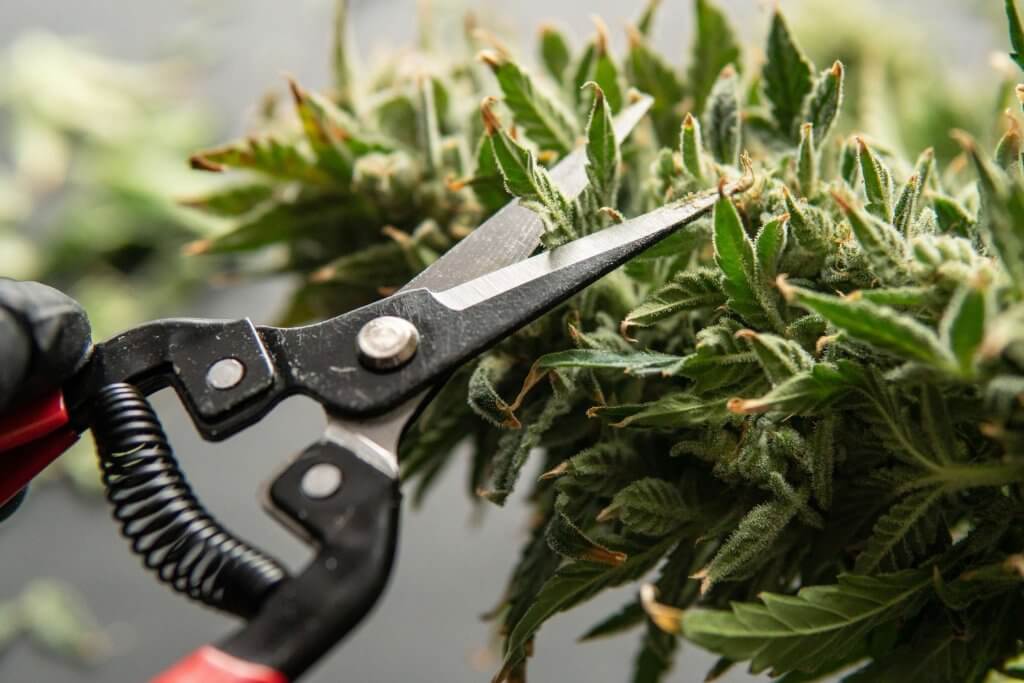 Sugar leaves sound like a mouthwatering proposition, but what are they? They’re part of the foliage that grows in and around the buds, copping a handy covering of overflow trichomes into the bargain. These leaves are pretty drool-worthy, but maybe not for the reason you think.

For one, the iconic leaf isn’t the star of the show. Instead, the sparkly, crystalline dusting offers the true treasure. Growers often know no better and dispose of the leaves, but it’s an awful waste.

Keep reading for a closer look at this exciting part of the cannabis plant. Discover what to do with sugar leaves, and learn how to identify them. You’ll also find out if you can smoke them.

What are sugar leaves?

What are sugar leaves on a weed plant? In cannabis plant anatomy, they’re small leaves that grow out of the buds. They’re much smaller than shady fan fronds that extend from the stem or branches.

The small leaves are mostly obscured behind or within the buds and may only comprise a single finger. Their stems are hidden, and the visible fronds have a coat of white crystals.

So, what is a sugar leaf? The foliage isn’t vital, but the substance certainly is. The white crystals are full of candied cannabinoids like THC and CBD.

They’re easier to see towards the end of the flowering phase when trichomes cover the buds and spill over. Fan leaves also produce them but in reduced concentrations.

Can you smoke sugar leaves?

They’ll burn, sure, but can you smoke sugar leaves? It won’t provide a sweet candy flavor. The foliage contains more chlorophyll and plant material that causes a rough, harsh taste. The leaves produce more fumes and could irritate your throat.

They contain lighter concentrations of active ingredients, so you need to smoke more significant volumes for the same effect. Toking on a cannabis leaf isn’t particularly enjoyable, but it’ll make you high.

Experts suggest smoking sugar leaves with the buds makes more sense, increasing volume and minimizing the negative impact. There are also other paths you can take.

How to trim sugar leaves

Sugar leaves have a decent covering of trichomes, so growers should learn how to trim cannabis. You can process the foliage to produce extracts or concentrates. The hairlike glands produce and contain the crucial cannabinoids and terpenes.

Learning how to trim sugar leaves takes some time to learn, and you’re unlikely to collect much off just a couple of plants.

Store them in a ziplock bag in the freezer until you need them. The temperature makes the weed leaves brittle and promotes trichome separation.

What else can be made from cannabis sugar leaves?

Many people try to reduce waste by using as much of the plant as possible. While some effort is involved, there are definite benefits to holding on to and processing the cannabis sugar leaves.

These tiny leaves contain lower volumes of cannabinoids but are effective for making tinctures. Fan leaves have even lower counts, but you can also use them to make extracts.

Decarboxylate your marijuana first to activate the cannabinoids. Chop finely or blend them before spreading them out on a baking tray. Put in a heated oven at 200–250⁰F for 40 minutes.

Check and stir regularly. Filter the mix through a cheesecloth to remove any impurities. After straining, you have a green viscous liquid. Pour into containers and refrigerate. The cannabutter separates as it solidifies.

Use cannabutter to prepare happy meals or psychoactive munchies. It’s one of the most potent intake methods and lasts long. Sugar leaf cannabutter is milder than its regular counterpart.

Use a pollen box to shake the crystals loose and process more significant volumes. Ten minutes of vigorous jiggling should produce a decent amount of “shake.”

To make sugar leaf kief, ensure the fronds are dry. It works better if they’re brittle, too.

Put a gram of decarboxylated cannabis sugar leaf in a strainer and add it to your tea. Add a dollop of butter or coconut oil as it binds to the cannabinoids. THC and CBD aren’t water-soluble. If you have cannabutter, add a teaspoon to your brew instead.

Most people use cannabis buds to produce edibles as their trichome concentration is higher. Use sugar leaves instead, but remember you require a greater volume to achieve a similar effect.

Baking brownies requires simple replacement of the nugs with a slightly heavier portion of the sweet fronds. You can also make oils, pills, and gummies.

FAQs about the cannabis sugar leaf

What are sugar leaves? We answer a few of the most common questions about these intriguing structures below.

What’s the difference between fan leaves and sugar leaves?

Fan leaves have the iconic, multi-fingered cannabis leaf shape. They’re large and usually emerge from the stem or the branches.

They power the growth of new weed strains, containing loads of chlorophyll and a large surface area. They have low concentrations of psychoactive trichomes, making them virtually useless for extracts.

Cannabis sugar leaves are much smaller and emerge from bud sites during the flowering phase. They can be single fingers and gain a significant coating of “sugar” due to their proximity to the flowers.

How do you store sugar leaves?

Store your trimmed leaves in a ziplock bag in the freezer. The cold makes them brittle and easier to crush. It also aids in separating trichomes from plant matter.

When do sugar leaves appear?

A single-finger sugar leaf starts growing in the third or fourth week of the flowering stage. The fronds emerge from the colas or bud sites and, by harvest time, boast a crystalline covering of “sugar.”

Get high on sugar

If you buy cannabis products from a dispensary, you may seldom, if ever, come across sugar leaves. If you cultivate weed, your chances are much better.

Buy your marijuana seeds from Homegrown Cannabis Co. We have the broadest range of high–quality strains in the United States and deliver nationwide in a matter of days.