Hemp vs. Marijuana: What’s the Difference? 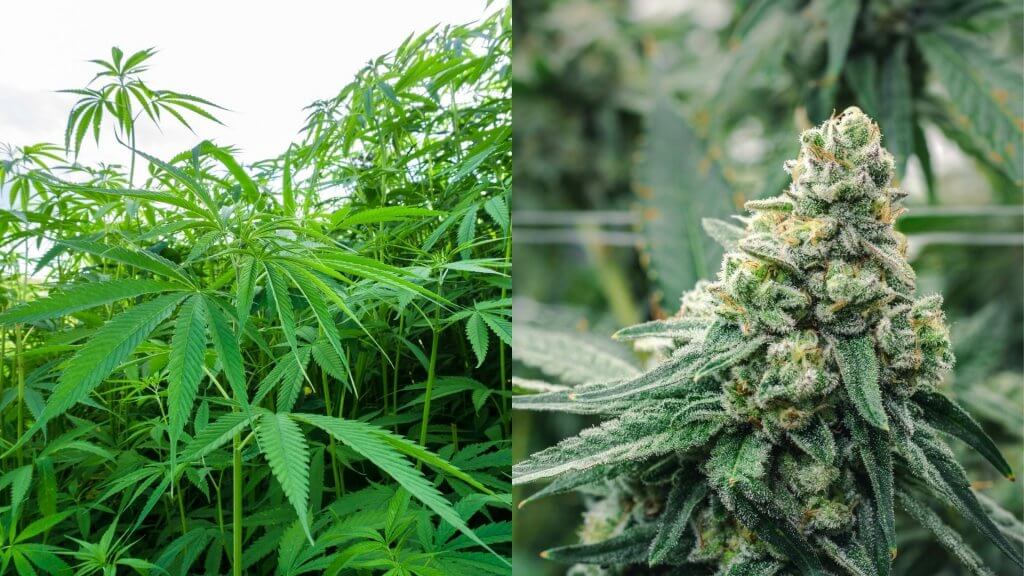 Have you ever wondered what the difference between hemp vs. marijuana is? Is hemp and marijuana the same plant, and do they have the same benefits? Is hemp weed?

Is hemp weed? Is hemp cannabis?

Many often regard hemp as cannabis or weed. Have you made the same assumption? Technically they are the same plant, viz; cannabis. Hemp is a term used to describe cannabis with a lower THC level than the marijuana strain.

It’s a favorite among growers as it’s a quick and easy plant to raise. It does this by flowering automatically after a certain period.

Hemp was a term dubbed for the strain in 1979 in a book called “The Species Problem in Cannabis: Science & Semantics.” The classification of these two plants identified more similarities between hemp vs. marijuana than many believed.

After further investigation, researchers discovered no category difference between the two strains except for the THC levels. The low THC levels are one of the main reasons hemp is legal, as very few cannabinoids exist to create any feeling of euphoria among its consumers.

Hemp vs. Marijuana: What are the main differences between hemp and marijuana?

Have you ever wondered what the similarities between hemp and marijuana are? There are a couple of things they have in common and some contrasts.

These plants are often misidentified and classified as two different strains of weed. It’s, in fact, not so different.

Let’s look at what sets the one apart from the other:

The difference in appearance

When it comes to the structure of hemp vs. marijuana, they are very different. Hemp has leaves that are much thinner and appear taller and slender. In comparison, marijuana leaves are sometimes broader and shorter in size, making them look bushier.

These differences aren’t easily visible to many, and it takes a skilled person to detect their unique appearances.

The difference in THC levels

Due to the low THC level in hemp, it doesn’t have any hallucinogenic effects. It is a cultivar of sativa and is specifically grown for industrial purposes and used in food products. For years it has been used in the manufacturing of textiles and clothing.

So, is hemp the same as marijuana? Besides being from the same species, their THC levels are one of their unique differences.

The difference in the name

Another difference between marijuana vs. hemp is their name. When it comes to marijuana, it has a controversial title due to its racist roots in the United States. It carries an anti-immigrant sentiment rooted in the Mexican people.

Previously only known as cannabis, it became “marijuana” due to its association with this culture. Many started spreading propaganda about this plant, linking it to racism as though cannabis was a Mexican product. It slowly contributed towards weed becoming illegal.

During the 1910s and 1920s, weed was legal to transport across the state lines. It only became regulated as an illegal drug in the 1930s.

The racial controversy resulted in the term “marijuana” becoming a word many consumers no longer want to use. The term cannabis, AKA hemp, became the preferred term.

The names of these two cannabis plants are one of the differences between hemp and marijuana.

Another difference between hemp and cannabis is that hemp was legalized in the United States in 2018 through the Farm Bill.

The bill classified hemp as an agricultural commodity and permit holders can cultivate it as long as its THC levels are below 0.3%. In contrast, cannabis or marijuana with its high THC levels remains federally illegal.

The legality allowed hemp to have over 20,000 uses and applications. It’s also available for purchase almost anywhere online and in stores, unlike marijuana..

The value that hemp adds to the economy and its various uses makes the difference between hemp and marijuana so distinct.

Since its legalization, authorities have allowed hemp to be grown, sold, and transported, within the parameters of the law.

Unless you have a valid permit, these restrictions could prevent you from growing hemp freely like other agricultural produce. It also highlights another difference between cannabis and hemp: stricter laws govern cannabis.

Certain states may prohibit hemp cultivation, and you’ll have to consult their laws to confirm this. Even with the legalization of hemp, the Farm Bill entrusts each state to make its own ruling regarding its legal status.

When it comes to the legal difference between hemp and marijuana, there isn’t any, as some states consider them the same.

Hemp vs. weed use

Hemp is grown for many different reasons, including clothing, paper, animal feed, plastic, and food products such as hemp seed and milk, which is high in fiber.

An attractive feature of hemp is that it’s an autoflower and photoperiod plant. It flowers at maturity and isn’t fully dependent on the light cycles to flower. Growth can occur all year round.

Like its name, autoflower seeds can flower automatically regardless of the light cycles. On the other hand, certain cultivators genetically enhanced feminized seeds to have a stronger chance of growing into a female plant only.

The uses of autoflower, feminized and regular seeds also add to the polarity between hemp and marijuana.

When it comes to marijuana vs. hemp, consumers have used both for their medicinal benefits. Several users have consumed hemp to help alleviate constipation, arthritis, and other conditions, even though there’s no actual scientific evidence.

Marijuana is also used by many to ease a range of medical conditions, including multiple sclerosis, nerve pain, nausea, and even migraines.

Besides these medical uses, it’s also enjoyed recreationally for its strong euphoric effects, which is one of the differences between hemp and marijuana. You can also consume hemp socially but without the same impact.

These benefits are another one of the few differences between hemp and marijuana. Another fact that sets these two apart is the classification of cannabis. There’s indica, sativa, or hybrid, with hemp being a sativa. Marijuana, on the other hand, can be any of these.

Hemp seeds have a high content of healthy fats such as omega 3 and 6, which contributes to the health of your heart.

It’s also rich in vitamins and minerals, which are great for keeping your immune system fully functional. It’s best used in salads and other cold servings but not suitable for cooking as it can burn easily.

When comparing cannabis vs. hemp, cannabis in its raw form also has many vitamins, dietary fiber, minerals, proteins, and much more. Who would’ve thought its nutritional value would be as high as its natural state.

Consumers enjoy cannabis much more when inhaled. Once heat is applied, all the cannabinoids associated with the known effects of CBD and THC are released. Something that creates a difference between hemp and cannabis.

Hemp is typically known to be low in cannabinoids. You’ll need to extract large amounts to obtain a small amount of CBD. Cannabis has a robust terpene profile that enhances the euphoric and therapeutic effects of CBD and THC and all the other benefits.

When looking at hemp vs. marijuana, there aren’t so many differences. The polarity is not typically in the appearances but beyond what the eye can see.

The differences between hemp and marijuana are in what they have to offer, what their legal status is, and how regulated they are regarding availability and production.

The easiest thing to remember when it comes to the difference between cannabis and hemp is that you can derive cannabidiol from both. Only hemp doesn’t provide the high that marijuana does.

It’s important to know all the facts when choosing a cannabis strain that best suits you. Whether for recreational purposes or medicinal use, ensure you know all the differences to avoid disappointment.

Differences aren’t always bad, and they can bring new possibilities. So if you’ve been avoiding any of these herbs because they’re too similar, perhaps these contrasts will give you new insights.

For more information, visit Homegrown Cannabis, where we aim to meet all your cannabis needs. Whether you want to know the difference between hemp and marijuana or buy cannabis seeds, we’ve got you covered.