What Is The Myrcene Terpene & What Does It Do? 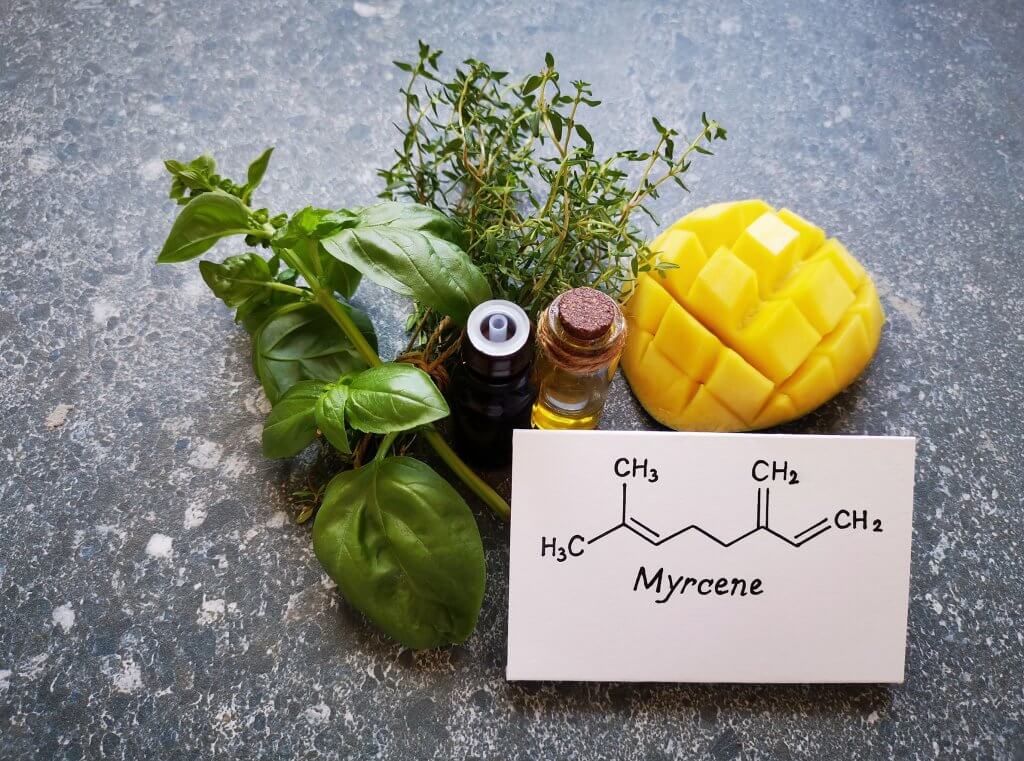 The myrcene terpene is one of the most predominant terpenes found in marijuana plants. You might know about its one-of-a-kind earthy and musky aroma, but did you know it also boasts many other benefits?

Join us to get the lowdown on the myrcene terpene and learn more about its effects, flavors, smells, medical properties, and potential dangers.

Cannabis plants are made up of different organic compounds, and terpenes are one of the prime constituents. They’re naturally occurring compounds located in the trichomes of female marijuana plants. The resinous glands found in these trichomes create cannabis terpenes, like the myrcene terpene.

Terpenes have multiple responsibilities and are imperative to a weed plant’s survival and growth. Apart from producing delicious flavors and aromas, they also ward off predators, attract pollinators, and assist in delivering mood-altering effects.

Terpenes, like the myrcene terpene, aren’t unique to cannabis plants and are also found in other flora, particularly conifers. However, unlike other plants, marijuana can produce more than 150 types of terpenes—albeit in trace amounts. When a handful of potent terpenes team up, it results in the strong and unmistakable scent of weed.

Many factors can influence the terpene levels in marijuana plants, including the growing conditions, light exposure, nutrients, temperature, and growing medium. Terpenes are volatile and can easily get lost during the extraction process, but modern-day marijuana enthusiasts opt for live resin extraction methods to protect the cannabis compounds.

The three most common terpenes found in weed plants are caryophyllene, limonene, and myrcene. Let’s discover more about the myrcene terpene.

What is the myrcene terpene?

Myrcene is one of the most common terpenes in modern marijuana strains, and it’s probably the one we know most about. Apart from cannabis, myrcene can also be found in hops, lemongrass, thyme, basil, and mangoes.

The myrcene aroma is a combination of cloves, earth, herbs, cardamom, and musk. This terpene profile delivers a mildly sweet taste. Until recently, researchers had no idea that terpenes could also alter the cannabis plant’s effects.

In a phenomenon called the ‘entourage effect,’ studies found that THC and CBD work more efficiently when paired with other compounds like terpenes instead of operating alone. As a result, higher levels of the terpene myrcene result in more relaxed and calm effects.

How common is myrcene in cannabis?

The myrcene terpene is one of the most abundant terpenes in cannabis. It’s believed to comprise up to 50% of the terpene profile in modern marijuana cultivars. If you tested multiple random buds, you’d discover they were myrcene-dominant strains at least 40% of the time.

This information reflects that terpene diversity is low in commercial marijuana cultivars. As such, breeders have ample opportunity to experiment with increasing terpene production. If somebody created a novel strain with a robust terpene profile, it would become an instant hit in today’s marijuana market.

What does myrcene do?

Myrcene, like other terpenes, plays an integral role in the growth, propagation, and survival of every marijuana plant. Aside from delivering unique flavors and aromas, what does myrcene do?

This terpene has narcotic qualities, which means it enhances sedating, relaxing, and calm feelings. Myrcene also boasts many medicinal benefits, including pain relief and decreased inflammation.

As the medical field continues to learn more about terpenes, their powerful qualities are slowly being recognized. The myrcene terpene benefits are mostly therapeutic and include the following properties:

When the myrcene terpene works in synergy with THC and CBD, it enhances the cannabis plant’s effects. As a result, it can help alleviate the symptoms of several medical conditions.

The myrcene terpene flavor has a slight tropical taste, complemented by its signature blend of earth and musk. Some of the underlying notes include cloves, herbs, and cardamom. A mild sweetness can sometimes accompany this bouquet of flavors.

Myrcene gives beer its distinct balsamic and peppery notes, and it’s also a frontrunner in the flavor of thyme, hops, and lemongrass.

The myrcene terpene smell is vastly similar to its flavor. Expect a powerful cocktail of earth, musk, herbs, spices, and pine. This aroma is potent and difficult to ignore.

What are the myrcene effects?

As mentioned earlier, the effects of myrcene are mostly therapeutic. When myrcene harmoniously interacts with THC and CBD, it significantly enhances the plant’s effects.

Here are the results of a study that investigated the relationship between certain compounds and the human body:

Can myrcene get you high?

Have you ever heard of the myth that eating mangoes before consuming cannabis can speed up the release of THC and intensify the psychoactive effects? Many people think it’s just a silly superstition, but the significant levels of the myrcene terpene in mangoes can sometimes do the trick.

If you consume myrcene on its own, you won’t get high. However, you can experience more intense and long-lasting effects if you smoke marijuana with increased myrcene levels. This terpene facilitates the movement of THC and CBD cannabinoids to your brain, and it also aids with transdermal absorption.

If you want to benefit from the myrcene terpene, you can take myrcene isolates before consuming cannabis.

There are many medical benefits of myrcene in weed, but the results depend on consistency, dosage, and your body’s reaction to it. Let’s explore some of these therapeutic benefits:

What are the myrcene dangers?

We’ve learned about the potential benefits, but are there any possible myrcene dangers?

In 2010, a study linked this terpene to the risk of developing cancer. However, it’s important to note that these findings were based on synthetic myrcene, not naturally-occurring myrcene found in food and plants.

Does myrcene cause cancer?

The National Toxicology Program discovered that high levels of myrcene resulted in cancer-causing effects in rats. The study showed that male rats suffered from increased liver and kidney cancer rates after consuming the myrcene terpene.

These findings don’t correlate with the occurrence of cancer from myrcene in humans. Despite this information, the Food and Drug Administration opted to remove synthetic myrcene from its approved additives list in 2018.

No evidence suggests that naturally-occurring myrcene is harmful to humans.

High myrcene strains are popular among recreational and medicinal consumers alike. Let’s check out the top strains with myrcene:

This sativa-leaning cultivar is a cross between Brazilian and South Indian landrace strains. White Widow boasts an infusion of myrcene and delivers pine-like, citrus, and earthy flavors. Expect an intense rush of euphoria coupled with an uplifting cerebral high and body-melting buzz.

This sativa-dominant hybrid promises a sweet berry scent and copious amounts of the myrcene terpene. Blue Dream is revered for its pain-relieving and anti-inflammatory effects, inducing a full-body buzz and plenty of psychoactive sensations.

A cross between Chemdog 91 and Super Skunk, Sour Diesel is arguably one of the most popular sativa-influenced strains to exist. This potent cultivar is packed with a high concentration of myrcene and limonene, delivering an uplifting high that banishes pain and stress.

A three-way cross between Mexican, Colombian, and Afghani landrace strains, Skunk XL is a legendary cultivar with an abundance of the myrcene terpene. It boasts an almost equal mix of sativa to indica and delivers gradual effects that relax your body and invigorate your mind.

The lowdown on myrcene

Although researchers are still learning about the myrcene terpene, there’s no denying its remarkable qualities. This unique compound boasts delicious flavors and fragrances, an array of medical benefits, and an intense high once it bonds with some THC.

If you want to experience the wonders of myrcene for yourself, why not buy some marijuana seeds and grow your own myrcene-infused cannabis plants? Remember to check out our blog for expert tips and tricks on cultivating cannabis.

« Osmosis In Plants: How It Works
11 Strongest Indica Strains You Should Try »