PGRs In Weed: The Ultimate Guide 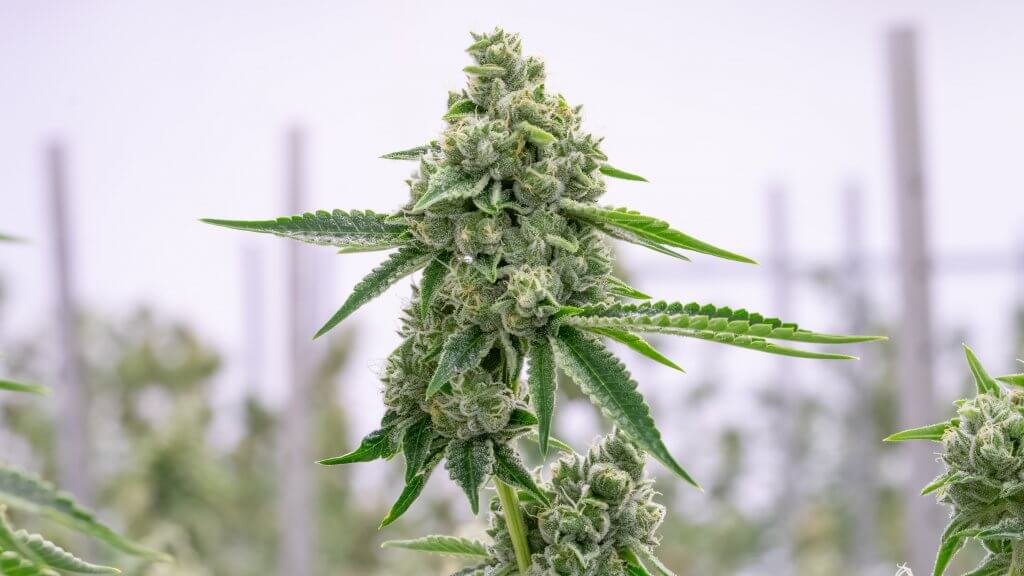 What is a PGR? Plant growth regulators (PGRs) were first discovered in the late 1920s and have been used for nearly a century. Implemented mainly in agricultural and landscaping settings, cannabis gardeners wondered about the potential for weed PGRs to improve yields and protect crops.

Regulators in the agricultural sector have long limited synthetic PGRs, but the cannabis community is yet to catch up. Some growers use these chemical hormone inhibitors to maximize their yields.

Read on to educate yourself on the difference between natural and artificial weed PGRs and how they can affect you.

What are PGRs in weed?

Growers use PGRs to increase, control, or manipulate the growth of flowering plants, in this case, marijuana. PGR weed is cannabis treated with plant growth regulators.

There are natural versions and synthetic, chemical, manufactured PGRs. Modern cannabis farmers are using both these means to improve yields beyond what is possible using merely organic farming methods.

Further studies are still required, but there are already significant concerns about synthetic PGRs in weed. Some products and compounds have been banned for use on foodstuffs, but many growers may inadvertently use them in their cannabis nutrients. Some of these PGRs simply aren’t labeled on the product package.

What’s more, these PGRs for weed actually hurt the harvest by reducing resin and trichome production. This directly affects the flavor profile and psychoactive effect of the cannabis you consume.

Synthetic growth regulators may present several side effects. Even worse, the chances are that PGRs in weed are harmful to human health in the long run. More studies are required to know exactly how dangerous they may be to humans.

What are the major types of natural plant growth regulators (PGR) for weed?

Natural weed PGRs include kelp, triacontanol, and chitosan oligosaccharides. There are also synthetic or chemical PGRs.

What do natural plant growth regulators do?

All weed PGRs affect or influence the plant’s hormones, also called phytohormones. These are similar to those found in the animal kingdom, with equally comprehensive and diverse effects.

Phytohormones prompt gene expression and cell growth, even in minuscule amounts. Both natural and synthetic PGRs can ‘turn on’ or ‘turn off’ these hormones.

In nature, these hormones respond to cues from the environment. They also act on cues from the genome stored in the plant’s chromosomes.

When looking at side effects from PGRs weed, we need to distinguish between natural and synthetic variations. Natural PGRs like kelp occur naturally and have no adverse side effects. Indeed, kelp is known as something of a cannabis ‘superfood.’

Synthetic PGR cannabis, however, is a different story. PGRs work differently, so their side-effects vary.

Note that the quantities involved are usually extremely small. If you’re a regular PGRs weed toker, though, this can add up over the years to become a serious issue. While these additives increase yield weights, they also increase the percentage of water and cellulose in the cells.

Some of these PGRs actively inhibit the production of resin, cannabinoids (like THC and CBD), and terpenes (which provide the flavor spectrum). There are also noticeably fewer trichomes on your weed grown with PGR. These factors mean users are unlikely to enjoy the full health benefits of marijuana.

Why choose natural PGRs for weed?

Firstly, natural PGRs for weed don’t present side effects like synthetic ones. Secondly, they elevate your crop without presenting the self-sabotaging effects of chemical PGR weed.

Also, the taste and effects of natural PGRs in weed beat the unpleasant chemically-tinged flavor and psychoactive effect reduction of PGR cannabis.

What is PGR weed? Growers usually use PGRs to inflate the harvest’s mass and density. It increases the weight of the yield, and growers do it for increased profits.

What happens when you pit PGR vs. non-PGR weed? The problem with synthetic PGRs is that although the buds are bigger and heavier, the quality and potency are adversely affected. Not only that, human consumption presents several potential dangers to users.

PGR weed has lower than average cannabinoid and terpene levels within the trichomes. These levels determine the psychoactive strength of the plant, the flavor of the cannabis, and the physical and chemical defense of the plant. It’s a big deal.

Different strains of natural marijuana produce abundantly generous harvests with none of the issues related to synthetic PGRs.

Plant hormones or phytohormones are naturally-occurring weed PRGs. There are five major types:

Scientists still have a relatively narrow understanding of plant hormones compared to those found in animals. Biologists are discovering new hormone types regularly as our understanding and knowledge grow.

Experts have identified brassinosteroids, florigen, jasmonates, salicylic acid, and triacontanol as plant hormones and have explored their functions. These naturally-occurring PGRs regulate and prompt different parts of the life cycle.

Synthetic plant growth regulators are man-made to mimic or restrict what phytohormones naturally do. They improve yields by cellular expansion through signal transduction pathways.

This process increases the water retention of the cells while also extending the cell wall. The walls are made of cellulose, and PGRs allow them to grow more to contain the extra water.

Artificial weed PGRs trick the plants by inhibiting or imitating hormones. Synthetic PGRs can interfere with the biosynthesis or creation of natural hormones, which scientists believe is most dangerous.

Synthetic PGRs also reduce trichome production, which diminishes flavor and effect. The heavier buds may appear impressive, but looks can be deceiving, and in this case, they are. The bulkier buds lack a liberal covering of sparkling crystals.

Weed PGRs are often used to slow down plant growth and limit stretching. Many growers call them ‘Plant Growth Retardants’ as a result. Weed PGR increases bloom weight and reduces the time required to harvest. However, it reduces the overall potency of cannabis. That’s before the potential for human harm is even addressed.

How to identify PGR weed

It’s important to know how to identify PGR weed. Synthetic PGR weed differs from natural cannabis in many ways:

When to use PGR in weed

Artificial PGRs act as suppressors or activators of growth genes, working with or against the naturally produced phytohormones. This allows the signal transduction pathways to pass along their messages or interrupt their transmission.

Growers can direct PGR in weed at the roots during vegetative growth and in the flowering phase. However, most synthetic PGRs for cannabis retard growth. As such, we should deploy them just before the development they aim to combat or assist.

Natural PGRs for weed assist with growth, defense against illnesses and pathogens, and increased production of terpenes. Kelp, chitosan, and triacontanol all aid the overall health of your crop. They also avoid any of the negatives associated with artificial PGRs.

How to use PGR in cannabis

Most marijuana farmers will implement PGRs at some stage during their crop’s life cycle. For best results, use natural PGR for weed. Consider the following:

Grows to huge lengths in the ocean, taking in a wide range of nutrients, which are ideal for your cannabis plants. Macronutrients like phosphorus, nitrogen, and potassium partner more than 70 micronutrients.

These vitamins, growth boosters, and hormone enhancers promote foliage and flowers. They also enlarge chloroplasts which aid photosynthesis. Kelp is used widely to help or retard growth on golf courses and football fields.

This is a natural fatty alcohol found in the cuticle wax of plant cells and beeswax. It’s a growth stimulant that increases the rate of photosynthesis.

Can improve a plant’s antibacterial and antiviral response and, as a result, are often called ‘plant vaccines.’ They can also change the growth structure of the plants and improve the immune system so that plants grow and develop efficiently.

While PGRs have been around for a century, their use in growing cannabis is a newer proposition. Growers, smokers, and medical marijuana users all have vested interests in understanding how these plant growth regulators affect their cannabis and possibly their health.

Below, we answer a few of their most pressing questions.

What PGRs are used in weed?

Both natural and synthetic plant growth regulators for cannabis are used today. Natural PGRs weed doesn’t seem to show any side effects, but we can’t say the same for artificial PGRs.

Some are, some aren’t, but many weed PGRs are still unregulated within the cannabis industry.

Daminoide has been outlawed on consumable products in the USA since the ‘Alar apple scare’ of the late ’80s. Yet, in the EU, most synthetic PGRs are regarded as pesticides and are still sprayed on apples in the UK, for example.

Agricultural safety standards are much stricter at present than cannabis regulation, where there is little to no oversight on weed PGRs.

Synthetic PGRs aren’t safe and should never be smoked or ingested. While further studies are required, clear evidence exists of harm in the form of cancers and liver disease.

Natural PGRs are used safely in the growth of many foodstuffs. They haven’t been linked to any adverse reactions. Organic PGR weed is safe.

What does PGR do to the body?

Paclobutrazol turns into carcinogenic nitrosamines when smoked in PGRs weed. PBZ is implicated in liver damage and problems with infertility in men and women.

Chlormequat chloride contributes to organ damage and irritation of the skin and eyes in high doses.

So there you have it—au naturelle is best. Treating your cannabis with natural PGRs can improve your weed bud harvest by maximizing the environment and potential of the plant.

Using natural weed PGRs is a great way of improving your grow operation. Synthetic PGRs are yet to fulfill their burden of proof when it comes to safety. Natural and organic remain the healthiest, safest way to produce foodstuffs or cannabis.

If you’re inclined or inspired to grow your own chemical-free cannabis, head down to the Homegrown Cannabis Co. online store to buy high-quality and germination-guaranteed cannabis seeds. With over 400 different strains, we’re sure to have exactly what you’re looking for.

« How to Make Cannabis Tincture In 5 Steps
Weed Etiquette: Learn The 11 Rules Of Smoking Weed Like A Pro »