How to Solve Cannabis Manganese Deficiency 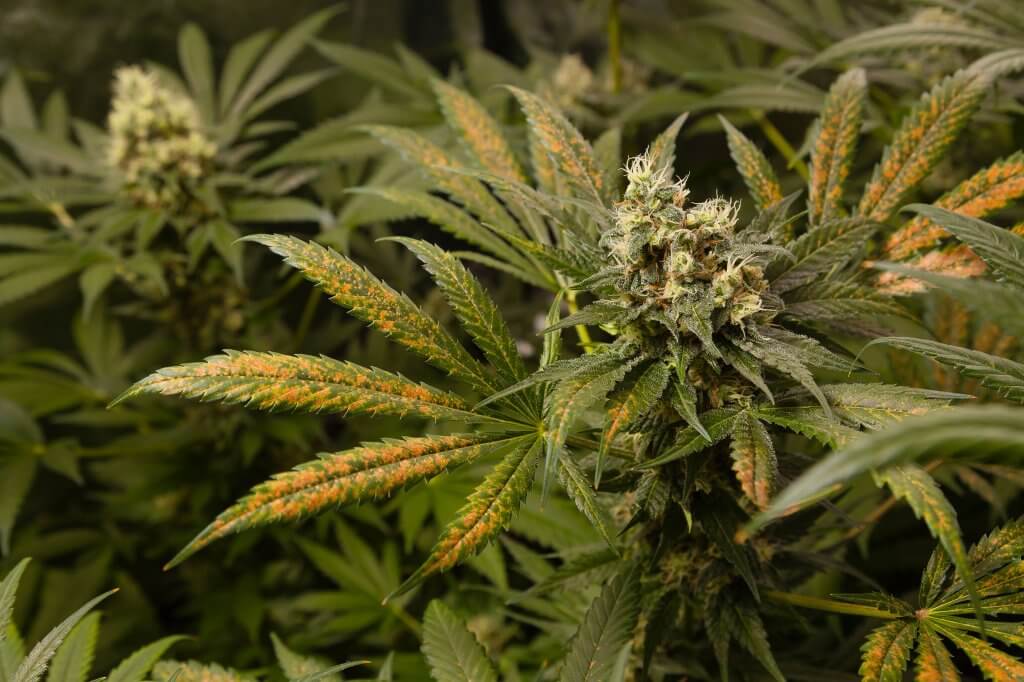 Does your weed crop look unhealthy? Does the problem seem to be getting worse? You may be experiencing a manganese deficiency in the cannabis plants.

Manganese is an essential micronutrient, critical to the photosynthesis process, creating chlorophyll and disintegrating enzymes. It’s also crucial in ensuring that nitrates are usable for creating proteins, which is vital for weed plants.

A lack of manganese isn’t a common cannabis deficiency as the micronutrient is typically found in abundance in soil, freely accessible by your marijuana plants. Shortages of this component are usually associated with media pH issues and a lack of iron (Fe) and zinc (Zn).

Read on as we explore manganese deficiency in cannabis, its symptoms, and how to fix this issue should it arise.

Manganese (Mn) is a crucial micronutrient and, even though only used in small amounts, it’s of cardinal importance to weed plant well-being, ensuring healthy growth. Only iron gets used in a greater quantity by shrubs.

Like all other cannabis nutrients (nutes), an Mn shortage (or if it’s toxic in the shrub’s tissue) can have a severely limiting effect on your cannabis crop’s growth. Being similar to Fe in various ways, manganese deficiency symptoms in plants can easily be mistaken for an iron shortfall or toxicity.

What does manganese do for your plants?

Manganese in plants is an essential micronutrient and critical contributor to many biological systems, including nitrogen assimilation, respiration, and photosynthesis. It plays a crucial role in cannabis plant development and growth and sustains metabolic roles within various plant cell compartments.

Mn is a vital contributor to the photosynthesis machinery’s oxygen-evolving complex (OEC), responsible for activating the water-splitting reaction during the photosystem II (PSII) process. The metal is also involved in the resistance to root cell pathogens and rootstock cell elongation, pollen sac or tube growth, and spore germination.

How do you identify cannabis manganese deficiency?

Manganese deficiency in weed is similar to a calcium shortage as it slows down growth and causes spotting on the leaves. If left untreated, it’ll lead to more severe problems.

This particular issue is relatively uncommon as it’s immobile and mostly gets confined to new or fresh growth. Being frequently misdiagnosed, manganese deficiency in weed plants typically results in growers spending several weeks on trial and error before eventually finding and correctly treating the problem.

By this time, development has stopped almost entirely, with much of the upper growth discolored, displaying wilting patchwork of brown, yellow, and light fading green.

The initial presence of manganese deficiency in marijuana is made visible by yellowing leaves that develop malignant small, brown-colored spots in the center of the blades, eventually causing disintegration.

The leaf veins typically stay green, while the outside of the blade turns into a dark green color. Next, the leaves will begin to turn yellow (at the bottom) and develop brown spots on the damaged areas. These brown dots may be lifeless, but they’ll expand and, in time, destroy the leaflet, eventually causing them to disintegrate.

On the flip side, when too much manganese is present, it’ll result in a lack of iron, diminishing your plant’s growth, eventually causing it to die.

The primary causes of cannabis plant manganese deficiency in weed are a high pH in the growth medium and excessive iron. Regardless of the substrate you use, a pH above 6.5 will tie up the manganese, making it unavailable to the roots.

Even if the cultivator diagnoses the issue early, increasing the micronutrient supplements without bringing the pH level down to 5.5-6.0 may worsen the situation. It could lead to a potential iron build-up, resulting in it locking out the manganese.

Telltale signs of manganese deficiency in marijuana include:

How to treat manganese deficiency in weed

If you suspect that your growth has a manganese deficiency, flush it with pure 6.0 pH water. Follow it up with a carefully adjusted 6.0 pH cannabis-friendly nute solution inclusive of Mn, such as Homegrown Cannabis Co’s Plant Power Ups, and your weed should get back on track.

Flushing your cannabis will remove any extra nutrient salts and iron affecting Mn uptake, supply your marijuana plants with missing minerals, and help restore the pH levels. It’s essential to monitor subsequent feeding and watering closely to prevent a recurrence.

If the plant manganese deficiency hits your crop during the flowering stage, you still have to prune away the damaged parts. Leaving necrotic growth puts your green canopy at risk of developing diseases and other pathogens. It’s essential to trim your cannabis in stages, though, as suddenly stripping them bare can be highly stressful.

Foliar feeding or spraying is a highly effective way for dealing with nutrient and mineral deficiencies, such as manganese deficiency in cannabis, in the short term.

It is significantly faster than applying nutes to the grow media via irrigation. Using this method will result in the blades taking in most of the nutrients you spray on your weed plants, causing them to absorb a much higher percentage of these supplements.

It also results in your cannabis giving off more carbohydrates into their rootstock and prevents a potential nute build-up in the soil.

Nutrient boosters are products designed to initiate or even accelerate the growth process or deliver an energy injection. In cannabis cultivation, these substances contain ingredients that influence the necessary procedures of the shrub, providing the grower with a positive outcome.

Products, like Homegrown Cannabis Co’s Plant Power UP’s, often get referred to as “stimulators.” It continuously promotes ongoing processes within the marijuana plant and, if they contain the correct ingredient, they may potentially prevent or fix cannabis manganese deficiency.

Can you mistake manganese deficiency in marijuana for other deficiencies?

The most likely cause for an unhealthy cannabis crop is a shortage of nutes in the soil or the rootstock’s inability to absorb nutrients. For this reason, it’s crucial to know how to pinpoint the issue as it can be challenging to identify the mineral that’s causing the issue.

When it comes to mineral shortages, merely looking at your weed plant’s symptoms can be misleading as many nutrient deficiencies may appear to be the same, especially to the untrained eye. For instance:

Prevention is better than cure

A manganese deficiency in marijuana can have a devastating effect on your crop. If left untreated, you run the risk of losing your entire harvest. As with every issue in life, prevention is better than cure.

The most effective way to prevent manganese deficiency in cannabis is to ensure that you saturate your weed using only pH-adjusted H20, optimally modified for your specific growing medium. Further precautions you can take to help common cannabis maladies include using high-quality marijuana-specific cultivation substrates and nutrients.

If you experience cannabis manganese deficiency, flush the entire system with clean pH-balanced water combined with a dose of manganese enriched cannabis-friendly nutrients. This exercise should neutralize the growth medium while providing your crop with any missing nutrients.

Do you suspect that your cannabis crop may be experiencing a nutrient deficiency? Visit Homegrown Cannabis Co online today for the best range of chemically balanced, marijuana-specific Plant Protectants and Power-Ups currently available.