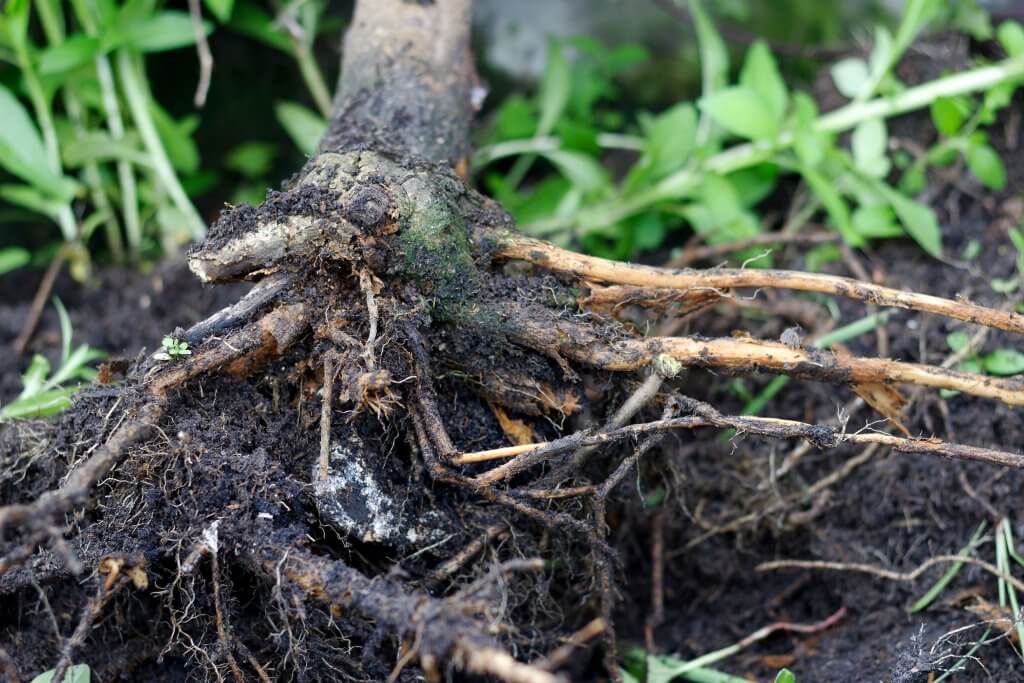 It’s devastating for both beginner and experienced growers to see homegrown greenery deteriorate. Root rot in cannabis can attack both soil and hydroponic containers, and you need to know why.

Join us on a trip and explore why some roots are more vulnerable to root rot than others. We’re going to dive around in a hydroponic reservoir and dig into a soil-based setup. Please take a deep breath, and let’s get to the root of this problem.

What is root rot in cannabis plants?

Root rot can be various unwanted organisms that attack vulnerable cannabis root systems, making the roots all gooey, brown, and mushy. These organisms consist of different plant pests like fungi, viruses [such as the tobacco mosaic virus], pathogens, harmful bacteria, damping off, or biomass decay. In the end, the roots twist and are unable to absorb nutrients and water.

Root rot in marijuana is a long-term problem. Spores could dwell in the topsoil and reservoirs even before planting, waiting to multiply and spread.

One cannabis plant’s infection can spread rot to all the other plants via an interconnected irrigation system and threaten your entire marijuana crop.

What does root rot look like: cannabis root rot symptoms

It’s challenging to detect cannabis root rot symptoms before it affects the stems or leaves since the trouble originates in the substrate. When a weed plant’s environment changes or is contaminated, it can cause unnecessary stress to the roots.

Look out for any abnormalities in both the water and soil. Early signs of root rot in cannabis might be:

By the time you detect the sad, discolored cannabis plants, the damage has already begun and is sometimes impossible to rescue.

Unless halted, cannabis root rot can lead to a lack of oxygen, nutrient deficiency, and inability to absorb water, killing the plant. During later development stages, root rot causes severe shortages, and buds can wither and die.

Root rot is a waterborne disease. The harmful organisms follow the water trail to the root system, where it spreads out and multiplies to cause root rot in cannabis. These fungus-spores germinate while traveling to the fragile roots.

Once it reaches its healthy victim, it scatters itself through the tissue and creates resting spores that’ll grow when the environmental conditions are suitable. This way, the fungus can damage your whole garden.

Before you can solve the problem, you must identify its cause and provide an optimal environment for the roots. Different organisms cause root rot; a solution that works for some growers may not work for others.

Let’s have a look at what changes in environmental conditions can cause stress in cannabis plants, making them prone to root rot:

Temperature too high or too low

Most fungi thrive in 68-93°F, and cannabis roots and plants prefer these temperature ranges:

By regulating the temperature, you’re providing a favorable growth condition to the pathogens. You have to prevent the heat from rising and remain vigilant about root rot during all flowering stages. Remember to monitor humidity when growing cannabis indoors.

When the temperature is too hot, the roots can develop problems associated with fungi and bacterias. When too cold, they’ll be in shock and wilt, resulting in root rot.

Fungi and other pathogens flourish in moist conditions. Preventing root rot in hydroponics can be a pest, as the roots are already in a liquid solution. If it’s too hot, the fungi will reproduce, so it’s best to keep your eye on this one.

When the weed plant overgrows the pot, it can’t fully develop, increasing the chances of getting cannabis root rot.

Too much water may drown your roots and attract bugs that prefer reproducing in wet environments; both of these problems will damage the roots.

If the medium is too thick, it may prevent the roots from getting enough oxygen, weakening its nutrient absorption.

When the hydroponic’s air pump is faulty, dirty, or taken out of the container to repair or clean, the cannabis roots can turn slimy and brown due to the lack of oxygen. Pathogens cling like a film and multiply while blocking out oxygen, resulting in infection.

Avoid these common problems in hydroponics, and use an air rock to oxygenate the water – this will keep the cannabis plant alive.

To restrict marijuana root rot altogether, avoid any light interaction with the hydro system. The plastic, lines, or reservoirs should be black and lightproof, preventing light leaks. Light provides heat, leading to the growth of damaging algae and bacteria.

Hydroponics are active water irrigation, reservoirs tables, or drip systems feeding weed plants the necessary amount of nutes during the day. Where there’s water, there’ll always be the chance to develop root rot, originating because of pathogen imbalances and a lack of oxygen, especially in dirty systems.

Roots are visible in hydroponics tanks, and when you see slimy brown roots and a dark oily film in tanks, filters, or tables, you should act. Otherwise, water molds can adapt and travel from one cannabis plant to another, using new plants and environments as hosts to feed on and multiply.

The oily film could be coating your roots, preventing oxygen from reaching them, adding to the build-up of toxic pathogens, bacteria, or fungi.

As roots die, they begin to decay, stealing even more oxygen from the environment and causing further issues and pH imbalances. Roots will regrow after you detach the wilted stalks, buds, and leaves.

You should keep all systems clean and balanced with enough oxygen to feed your weed plant’s roots. A hydroponic system lacking in oxygen is an ideal environment for plant pests to cause root rot.

Nutrient-stained roots will appear healthy and strong and won’t be slimy, smelly, or covered with an oily film. Correcting a root rot issue from any source is achievable through a cleaning, treatment, and maintenance routine. Please note that you can’t repair all damage.

How to fix root rot in cannabis plants

Take action in these areas to combat root rot:

Beneficial bacteria such as fungi form a symbiotic relationship with the plant, insulating and protecting it from damage and enabling better nutrient absorption.

It’s crucial to maintain a healthy, stress-free environment against root rot pathogens and viruses. The ideal temperature for the reservoir’s water is around 72°F. Check the humidity, and make sure to amend lots of free-flowing dissolved oxygen for a healthy hydroponics system.

Consider an air pump with air stones for your hydroponics system. The more bubbles and surface agitation, the better the oxygen dissolves into the water.

When growing cannabis using the Deep Water Culture (DWC) technique, you must consider both the DWC root zone’s environment and when the cannabis plant is blooming.

Ensure that the rapid root growth matches the bubbly nutrient solution with the proper light, humidity, and temperature levels.

The roots benefit from the oxygen bubbles streaming through the air stone underneath them, creating a fizz in the nutrient solution. Plus, cannabis DWC roots benefit from extra aeration. Higher volumes of air encourage faster root growth. By maintaining a fresh bath, correct temperatures, and nutrient levels, you won’t struggle with DWC root rot.

Ensure not to disturb the roots when adding oxygen. Root rot has trouble establishing in an oxygen-rich environment, and cannabis plants will grow faster with lots of oxygen.

Ensure all equipment is cleaned regularly

Cannabis root rot treatment is a two-part process. You should stop the disease first and then change the weed plant’s environmental condition to prevent the proliferation of harmful pathogens.

While the hydroponic system establishes, the solution doesn’t have a secured colony of good bacteria around the roots.

It would be best if you also sanitized yourself, including your clothes.

Follow these measures on how to fix root rot hydroponics:

Don’t disturb a healthy root system because it hasn’t yet grown a protective biofilm to protect roots against pathogens. Harmful bacteria create a film that starves roots, whereas good bacteria forms a protective film around the bases.

Ensure Cannabis root rot is not a problem!

White ivory roots can become slimy and brown as root rot attacks cannabis in soil, DWC, and hydroponics systems. It can take over and infest weed plants with viruses or fungi, quickly wilting and killing them.

It’s possible to prevent weed root rot by providing optimal mediums (the proper temperature, humidity, water, oxygen, and pot size) for the cannabis plants to grow. If you take care of these, there won’t be a problem.

Ensure enough bubbly oxygen from the start because it seems to be one of the best root rot cures for DWC. Please remember: prevention is better than cure. If your plants are already suffering from root rot, there’s only so much you can do to save them.

Healthy cannabis roots are white or cream, whereas sick roots look squishy, mushy, snotty, brown, and bunched together. It’s crucial to differentiate between nutrient-stained and unhealthy roots; a healthy system shouldn’t be disturbed.

Root rot is severe, and it’s tough to treat. If you manage to save the cannabis plant, it’ll have growing deficiencies. The best way to deal with this condition is to maintain an optimal environment for your plant and roots, and remember to start off with high-quality cannabis seeds!

To keep learning about this subject, check our comprehensive report on cannabis roots!