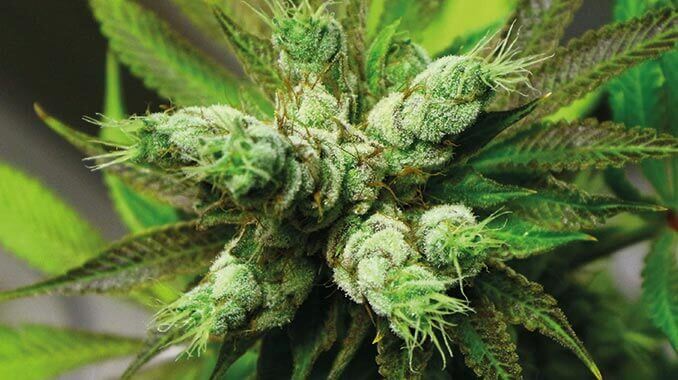 It’s disheartening to see cultivars that you’ve nurtured for a long time show foxtailing buds that are aesthetically ‘disappointing.’ Worst of all, it usually happens when you’re on the home stretch, close to harvest.

Many cultivators who hadn’t planned on it hate foxtail buds because of how they look, but it’s not serious in most cases. Fortunately, this problem hardly leads to plant fatalities and is easy to rectify if you notice it early.

Foxtailing is one of the rare issues you might encounter when growing cannabis, no matter how hard you try not to. We’ll look at what is foxtailing, its causes, spotting it, and actions you can do to rectify the issue. Let’s roll!

Foxtailing on weed happens when calyxes form on top of others, mostly during flowering, so much that it’s noticeable.

Buds constitute calyxes (plural for calyx—potential home for a seed), which usually develop evenly as they bunch up together.

A foxtail weed plant grows unnaturally odd spires/towers of calyxes that shoot up and out unevenly on affected colas. As a result, you get slender little parts rather than nicely rounded, solid nugs developing along the branch.

This calyx over-development syndrome isn’t good news in most cases because the foxtail cannabis colas become loose and airy.

The flowers take on a strange and irregular shape, like spiked-up colas. Instead of the buds having the usual dense and rounded structure, they appear bushy, like a fox’s tail.

A major reason why most growers don’t want foxtail marijuana is that buds may not be as dense as they’d have hoped for.

Tighten up the grow room environmental conditions, particularly during the flowering phase, to prevent weed foxtail.

Cannabis foxtailing isn’t necessarily bad since it doesn’t bring any harmful effects. Some strains are prone to getting it more than others, which might increase yields.

Foxtailing buds may suggest that your plants are under some stress. Please take the necessary steps to fix the problem before it becomes worse. Fortunately, foxtailing is hardly ever a fatal issue, but it can affect the quality of your end product.

You may get lesser yields, though the terpenes, THC, cannabinoids, and smoke quality are great. However, some consumers say foxtailing buds can hurt the potency of your flowers, especially if you have to harvest earlier than expected.

Unfortunately, heat or light stress means you’ve lost a bit of potency on affected buds. Rectify the issue by putting the lights further away or regulating the temperature to prevent more damage.

Foxtailing on weed isn’t something to beat yourself up over. This rare process occurring in your grow doesn’t necessarily mean you’re a bad cultivator. That’s just the nature of the beast.

Worse and more common problems like root rot and deficiencies are more likely to affect you than foxtailing buds.

What causes foxtailing in cannabis plants?

You need to know what causes foxtailing before applying the fix. Here are the main things that can trigger it.

The main reason you might get cannabis foxtail is because of genetics. Nature isn’t perfect, but the choice is up to you and the growth conditions.

We have numerous strains in our catalog. A small percentage of them are more inclined to foxtailing consistently. Some growers love such strains to get a strange-looking plant with a unique bag appeal and airy buds.

If weed foxtailing occurs outdoors, it’s almost certainly to do with genetics. You’re more likely to see it in sativas than indicas due to the former’s elongated bud structure and long internodal spacing.

You might also experience foxtailing buds due to cannabis light stress, particularly from LED lights indoors. Some artificial sources of illumination can be too intense or close to your canopy.

Before foxtailing buds, the plant might show symptoms of light burn or bleached leaf tips at the top of the canopy. Remember, light stress isn’t heat stress, which ravages the whole plant.

Yellowing leaves, especially those at the top, can also indicate symptoms of light stress before foxtailing. Light stressed leaves remain relatively strong. This means they do not wilt and fall more easily than yellowing ones caused by nitrogen deficiency.

It’s rare to find light stress on plants under high-pressure sodium (HPS) or metal halide (MH) lights. Growers are innately aware of the heat they emit and place them further away, so you’ll hardly get weed foxtails when using them.

Fluorescent lights (CFLs and T5s) are usually used in the veg phase and don’t cause light stress because they are not very powerful.

HPS, MH, or plasma lights emit a lot of radiant heat. These apparatus often lead to heat stress, but this issue isn’t as common as light stress nowadays due to cooler fixtures. As a result, foxtailing weed due to heat is rare.

The distance you need to keep the lights from the canopy depends on the intensity of your grow lights.

Note the varying brands and models because each grow light has different specifications.

Heat stress can ravage your cultivar in worse ways than foxtailing buds.

Problems in the root zone can cause issues above the soil. You might have an anaerobic environment or the wrong pH in the grow medium which could cause foxtailing buds.

Don’t ever skimp on utilizing a quality pH meter because you’ll need to ensure your water and growing medium allows for optimum nutrient uptake. Cannabis plants like slightly acidic water, so keep the pH to around 6.0–7.0 in soil and 5.5–6.5 for hydro.

The wrong pH leads to lockouts of required nutrients, causing foxtailing. However, worse issues such as deficiencies are more likely to occur first.

The plant won’t absorb the right nutrients or beneficial bacteria they need when the pH level has issues. Get pH testers, and ensure there are good microbes in the root zone if growing in soil.

An unsatiated weed plant can start foxtailing. The soil might seem okay to the naked eye, but it’s bustling with life. Some bacteria and fungi form a symbiotic relationship with your plant by breaking down nutrients in this medium.

Some parasites like nematodes devour roots, especially in the seedling stage when the root system isn’t fully established. There’s much more to microbial life; it’s not just about watering, nutrient feed, lighting, and harvest. It’s an important subject to know when growing in soil.

How to fix foxtail cannabis

Foxtailing doesn’t halt your cultivation journey. You can rectify it by adjusting the growing environment to neutralize common issues that lead to it. You’ll likely fix the problem if you detect it early. Here’s what you can do:

Knowing how far your lights should be from the canopy is a balance. Elevate the source regularly as the plant grows taller. Move lights higher up if you notice signs of bleaching or marijuana foxtailing.

You can increase light intensity by adding more CO2 to the grow room, but there are limitations to how far you can go. You’ll also notice foxtailing buds appear closer to the center of the canopy due to intense light.

Some lights have the option of dialing down their brightness. You can also train your cannabis plant to grow to acceptable distances.

The nighttime and daytime temperatures could cause foxtailing weed. Most grow light manufacturers provide a range for where to place them from the canopy.

Protect cannabis plants from too much heat in a desert-like environment by using a shade outdoors to avoid weed foxtails.

Adjust the temperature if the grow room’s too hot through several steps. Add extra ventilation to remove hot air or run an AC unit to decrease the heat. Ideal grow room temperatures range from 68–75℉ while flowering.

You’ll hardly see foxtailing weed if the grow lights are at a suitable distance and temperatures are not too high. Some cultivators even choose to keep the lights on at night instead of during the day. This switch is beneficial when ambient temperatures are too high.

Note the seasonal changes and whether you’re growing during hot summer or cold winter times. Get a hygrometer to monitor the temperature in your grow room and adjust as needed.

Lucky you if you notice pH issues due to foxtailing buds and not worse problems. Use pH up and down products to keep pH within the required range.

Always monitor pH in your water and soil to prevent nutrient lockout issues that can cause weed foxtail and many other concerns.

The root zone needs to have the right balance. Make sure no fungus or bacteria is growing on your roots. Get good microbes to fight off nematodes.

You can add mycorrhizal fungi and rhizobacteria when making your soil mix. Add good microbes to fight off minute pests like nematodes in the soil.

When to harvest foxtailing buds?

You can still use buds that have foxtail cannabis. It’s not as bad as more common issues like molding, bud rot, or powdery mildew. Promptly get rid of nugs affected by any of the aforementioned concerns.

Some cultivators use auto trimming machines or manually cut off cannabis foxtails. Don’t be surprised to know that you might have enjoyed foxtail buds and weren’t the wiser.

You still get to enjoy the fruits of your labor since foxtailing cannabis is mainly a cosmetic issue. Yield when trichomes turn from clear to cloudy close to harvest time.

Ideally, harvest when 20–30% of trichomes turn amber. Squeeze out concentrates or make hash if the foxtail bud doesn’t cut it for you.

Unfortunately, harvesting earlier than expected means taking cannabis that doesn’t have phytocannabinoids at the optimum levels. Apply the fixes detailed earlier to get better harvests for most foxtailling strains.

Wild at heart, weird on top

Foxtailing buds don’t bear any harmful effects but may suggest that your plants are under stress. We’ve also looked at ways to rectify the situation before it worsens by dialing in your environment. Remember, light stress is the biggest cause of foxtailing nowadays.

Check out our community forum to get the best tactics and answer to any problems you encounter in your growing journey. You can engage budding cultivators in this free community.