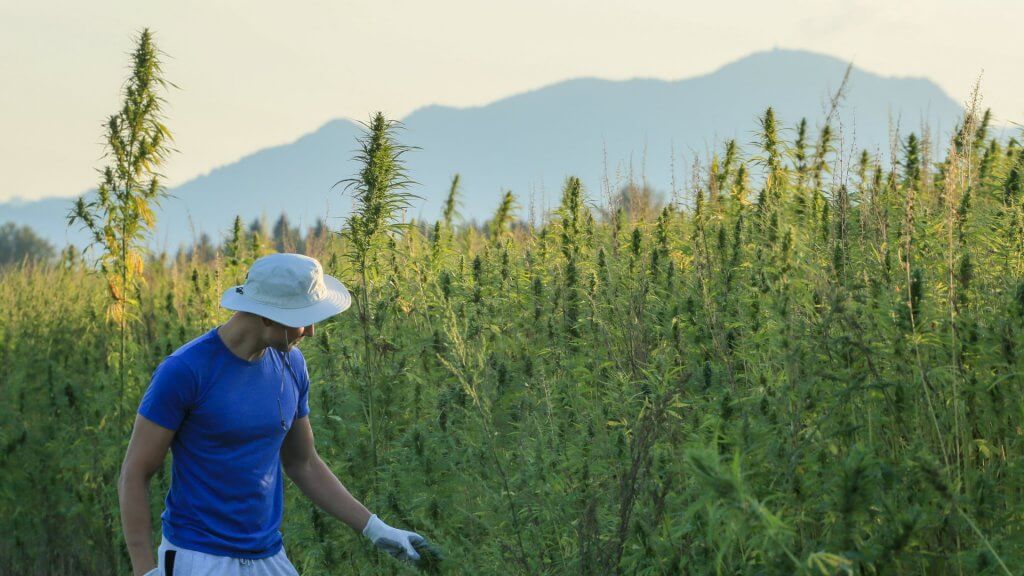 Before you learn how to get rid of gophers and moles, you need to understand how to tell them apart. One of these small creatures is able to wreak havoc on your marijuana crops. There’s even a chance an entire plant can go missing. The other suspected animal poses no threat to you or your cannabis.

There’s no reason your outdoor growing experience needs to turn into a scene out of Caddyshack. Join us as we explain how to get rid of gophers and moles in your yard humanely, for good.

What do gophers and moles eat?

The diets of these two potential pests are nothing alike.

Moles are mammals and hunt for slugs, earthworms, grubs, and other insects to eat. They have no interest in your cannabis plants or any type of vegetation. In many ways, they act as a form of pest control, making it unnecessary to get rid of moles in your yard.

Gophers, on the other hand, are rodents and can’t resist your marijuana crops and the humble weed leaf. They love chewing on stems, leaves, and roots. There’s a good chance they’ll enjoy your sticky buds too.

The presence of these annoying guests in your garden can ruin any chances you have for a harvest. Violence, however, isn’t the best way to get rid of gophers, and its required steps may lead to further issues.

What is the difference between gophers and moles?

As Sun Tzu explains, you need to know your opponent if you hope to beat them.

What better way to learn how to get rid of gophers and moles than by learning to tell these two animals apart? When it comes to cannabis pests, you wouldn’t think gophers are dangerous at all.

They look like slightly large squirrels but without a bushy tail. These rodents range in size, growing between 6–12 inches. Their fury coats vary depending on their variety but are usually brown, red, or ash-colored.

You’ll know you need to get rid of moles in your yard if you see a small black or gray colored animal. They are smaller than gophers, growing up to eight inches long at most. They look similar to a shrew, with a long pointy nose and disproportionately large feet.

There’s a common misconception that moles are blind. In truth, these benign pests can see. Their eyes are actually incredibly sensitive to light, allowing them to navigate easily underground.

A big difference between these two animals is the way they breach the surface. Finding one of these mounds is your best way of identifying these pests and picking a subtable method for mole and gopher removal.

Moles leave mini volcano heaps in your garden. If there’s an opening, chances are the submerged tunnel is currently in use. Mounds without an entrance are a good sign that the small mammal is somewhere else.

Gophers create a crescent-shaped mound on the ground along with noticeable tunnels leading under the surface. A key factor to take into account when trying to get rid of gophers and moles is that the former are sociable animals. There’s a chance you need to remove an entire family from beneath your feet.

Moles, on the other hand, tended to live alone. The community spirit of gophers means that older members hang around active tunnels. If they see any hawks in the air or cunning cats in the shadows, they alert the other rodents by calling out.

If you want to learn how to grow cannabis outdoors, you’ll need to understand how to identify issues. Pest control is a vital piece of the cultivation puzzle if you hope to grow quality buds.

As gophers and moles dig under the surface, there’s a chance they destroy the root system of your cannabis crops. The former suspect is likely the culprit of all this horrific damage and your true enemy.

Moles tend to avoid tunneling through roots. But if they come across continuously moist soil with a surplus of earthworms, they’ll make an exception. It’s essential to learn how to get rid of gophers in your yard because they love eating the roots of your plants. They’ll tunnel right through the intricate system, gnawing off bits as they go.

When they’re not ravaging your crops underground, gophers are also above the surface, chomping on their leaves. There’s no telling how much damage they can cause if not removed as quickly as possible.

Mole pest control isn’t required if you’re seeing the foliage of your plants eaten. These small creatures rarely emerge from the surface and when they do, eating crops isn’t on their agenda.

While damage to your crops is a painful sight, nothing is more unsettling than an entire plant disappearing.

If you experience a sudden shortage in the number of cannabis crops in your garden, a gopher is likely responsible. They pull the whole plant into their tunnel and snack on it underground.

Mounds on the surface

A clear sign that you need to get rid of gophers and moles in your yard is if you see mounds on the ground. As we pointed out earlier, the appearance of these holes also sheds light on which of these creatures is to blame.

A large cone-like pile of dirt shaped similar to a classic ant mound is an indication of a mole in your garden. A hole with a crescent-shaped heap around its entrance is a tall-tale sign of gophers and requires instant attention.

Evidence of underground tunnels is another sign that you need a mole and gopher removal strategy. Moles tend to dig deep under the soil, which doesn’t usually leave noticeable tunnels.

In comparison, gophers burrow close to the surface. If you have these furry pests in your yard, you’ll notice a trail of destruction in their wake.

How to get rid of gophers and moles naturally

Now that you know the difference between these two pesky pests, you need to learn how to protect your outdoor grow.

Here are four of the best ways to get rid of gophers and moles.

A reliable way to convince these small animals to find another food source is by planting alliums near your cannabis. Alliums are a type of species that include garlic, leeks, onions, shallots, and chives. The smell produced by these low-maintenance herbs will fend off hungry gophers and other pests.

There are a few other plants that repel moles and gophers, like oleander. However, this type of species is toxic to you and your pets, so it’s best to avoid it altogether. Besides, once grown, you’ll have a bunch of healthy ingredients to use in the kitchen.

The best way to get rid of gophers is by pouring castor oil or garlic down the entrance of their hole. You’ll need a few other ingredients to create this effective pest repellent. Fill a bottle up with a gallon of water and mix in around eight ounces of castor oil. Stir the solution together, adding dishwashing liquid until it becomes foamy.

Fill a spray bottle with the liquid for easy application or pour it directly down the gopher’s hole.

Those looking to live harmoniously with nature don’t have to get rid of gophers and moles. Instead, install underground screens to shield your crops and their roots from these furry creatures. This technique requires some preparation, as you should ideally do it before you plant crops in an area.

Buy a metal mesh from your local hardware and bury it below the surface around two feet deep. The sheet will stop these pests from getting to the cannabis roots and leaves, giving you less to worry about.

Anyone who wants to learn how to get rid of gophers humanely can use catch and release traps. Put some food in these specifically designed cages to lure the pests out of their tunnel. As they go to eat the bait, a door closes, stopping them from escaping. After trapping the gopher, take it to a wild or suitable area and release it.

Before you try to figure out how to get rid of gophers and moles, you need to identify the pest first. The only thing these two animals share in common is that they’re both warm-blooded. Everything else is different, including their species, appearance, behavior, diet, and tunneling styles.

Once you know what creature you’re dealing with, use the appropriate removal method for effective results. There are even ways to learn how to coexist peacefully with these animals and benefit from them.

The best way to get rid of gophers is by pouring castor oil down their holes. It not only chases them away but also discourages them from returning.

Pests are an unavoidable issue when growing cannabis outdoors. Make your life easier by only using quality marijuana seeds from our store. Strong genetics helps plants protect themselves against harmful insects.

Need help identifying a pest in your outdoor garden, or do you want to learn more about how to get rid of gophers and moles? Head over to our Homegrown Forum for more helpful guides, or ask our cannabis community for assistance.