How To Identify And Treat Russet Mites On Cannabis 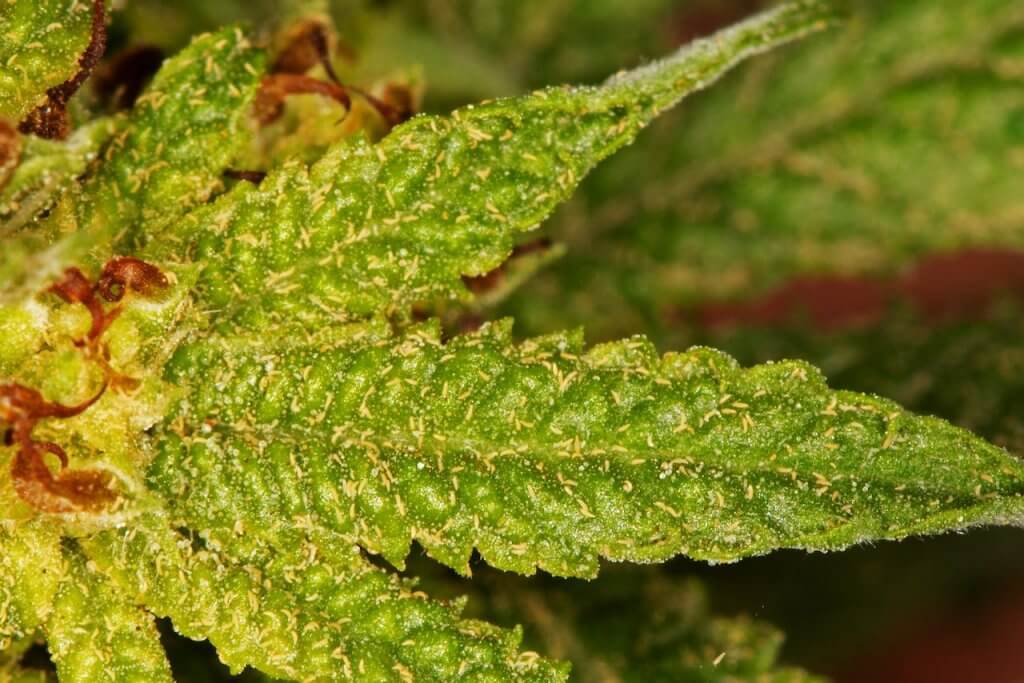 Pests pose a challenge to cannabis cultivators, and it’s critical to be aware of issues like russet mites. Unfortunately, it’s a massive problem as you may not notice them until the bugs severely harm your crops. There are ways to combat the threat, though, if you know what to do.

Prevention is your best defense, but an infestation might still occur, so learning to identify signs of russet mites is vital. Alas, it’s easy to mistake them for other marijuana plant afflictions, such as mold, fusarium, nutrient deficiency, overwatering, or heat.

Discover practical ways to prevent and treat a problem if and when it happens. This knowledge makes it possible to avoid or minimize the risk of cannabis russet mites destroying your crops. Are you ready to discover more? Let’s kick things off by understanding these bugs better.

What are cannabis russet mites?

Russet mites (Aculops cannabicola) from the family Eriophyidae are tiny insects that commonly attack marijuana plants. They’re smaller than spider mites, and you can only view an infestation using a magnifier.

What do russet mites look like? The bugs have long torpedo-shaped bodies and are similar to the larvae of other insects due to their milky hue. Their torso consists of two segments:

Cannabis russet mites’ males are 160–165 microns in size, while the females range from 170–210 microns. What makes them unique from the other mites is that they have four instead of eight legs.

Hemp russet mites can’t move from one host to another on their own due to their size. They can, however, get to the edge of leaves and let the wind carry them. They attach themselves to clothing and other insects, such as aphids, on cannabis plants.

They can propagate and attack your weed plants all year round. An early infestation of russet mites on cannabis doesn’t appear prominent but spreads quickly. The pests cause the most damage during flowering as they affect your buds.

Signs of russet mites on cannabis?

As you can’t see the individual bugs, it’s critical to identify the symptoms and differentiate them from other common marijuana issues like cannabis nutrient deficiency or tobacco mosaic virus.

Where do russet mites come from? They live on the underside of leaves or in the crannies of stems or buds. They consume the foliage close to the base of your plant and work upwards.

The bugs suck nutrients from the leaves and petioles, causing spots that turn orange or yellow. In addition, russet mite leaf damage can stunt your plant’s growth and bud production, resulting in lower harvests and poor-quality nugs even if you grow high-yield seeds.

The wilted leaves soon fall off, and your shrub weakens and dies as the damage progresses.

Other signs of a potential infestation of russet mites on weed include:

What is the life cycle of a russet mite?

Russet mite eggs hatch after two days, and the larvae appear in about three.

Researchers believe the hemp russet mites’ life cycle is similar to other eriophyid mites. The bugs can live between 7–10 days and longer, depending on environmental conditions. The females survive up to a maximum of three weeks.

Although the russet mites’ life cycle is short, they can thrive all year round in greenhouses as there’s a constant supply of food.

Solving the issue is challenging as russet mites’ eggs live inside the plant, but there are treatments. Unfortunately, many regular miticides aren’t effective, so you need to consider other options.

First, quarantine the infected plant to contain the infestation. As the bugs start attacking marijuana plants from the bottom, working upward, remove leaves with signs of russet mite damage.

The method is economical, as using chemicals can be costly due to the hemp russet mites being resistant to many insecticides. You may have to treat your plants several times a week, depending on the severity of the problem.

Some of the standard treatments growers use to remove russet mites are similar to those applied to other pests, including the fungus gnat.

If the infestation is too intense, you may need to dispose of crops and start over. Ensure that you clean the growing space thoroughly and remove any debris to reduce the risk of reinfection.

To avoid pesticides, use predatory mites for russet mites. Biological control methods alone may not eliminate the infestation but can minimize the harm they cause if you apply them correctly.

Neem oil, an extract from oil seed kernels, contains azadirachtin, which is responsible for its pesticide action on arthropod pests like whiteflies on cannabis.

Although neem oil is effective in russet mites treatment, use it with care. Applying it during flowering leaves an unpleasant odor on buds, so avoid getting it on your nugs.

Spray the foliage evenly. Don’t use it more often than necessary, as the solution is harsh on your cannabis plants. Only apply it to your crops daily when nothing else works to counter the russet mite damage.

Another way is using Essentria IC3, an organic insecticide comprising various horticultural oils. Using the product to treat russet mites on cannabis plants is safe as it doesn’t harm humans.

Its effects last only for around eight hours, so spray your crops daily or combine it with other treatments.

Insecticidal soaps are another excellent option to eliminate rust mites on cannabis. They’re safe as they weaken the outer shell of the bugs but don’t harm your plants and kill beneficial insects.

As with neem oil, avoid spraying it on your buds, as it can affect their quality. The substance doesn’t remain on your crops for long, so apply it regularly.

If you’re asking how to get rid of russet mites during flowering, Mighty Wash is a product that may help. It’s ready to use, so you don’t have to dilute it before spraying.

Apply it to the soil and foliage until you drench your plants. The ideal time to do it is about 15 minutes before dark to reduce the risk of burning your crops. Use a fan to help it dry.

Avid may do the job of killing russet mites on cannabis but only implement it when there’s no other alternative, as it’s a harsh miticide. It works by penetrating the plant tissue to destroy bugs. Don’t use this product during flowering, as the chemicals get into your buds.

Avoid using the pesticide consecutively as the bugs may adjust to it. Instead, alternate between Avid and the product we discuss next, Forbid.

Forbid, like Avid, is another last resort solution for russet mite damage on cannabis plants. Unfortunately, it’s also a coarse and costly miticide.

Forbid is a systemic pesticide that infiltrates your plants to kill russet mites. Don’t use it when your crops are flowering, as it contaminates your nugs.

Diatomaceous earth comes from the sediment of fossilized algae. Although harmless to humans and animals, the powder-like product tears into russet mites on marijuana and dehydrates them. It won’t remove an infestation, but it helps slow the progress.

Some cultivators use heat to destroy russet mites on weed by dipping small plants in hot water (105°F) for 10–20 minutes. Others raise the temperature of their grow space to 115°F for an hour.

Exercise extreme caution when trying this method, as you may stress your crops while eliminating russet mites on weed.

Another non-toxic product, Green Cleaner for russet mites, is perfect as it removes pests, mildew, fungus, and mold without chemicals. The product attaches to the target, its larvae, and eggs before disrupting respiration and digestion.

How to prevent russet mites on marijuana plants

Now that you know how to kill russet mites, these are ways to prevent an infestation.

Preventing an infestation is the optimal solution, as the bugs can pose a challenge. Knowing the signs of russet mite damage on buds is the next best thing, as early detection and remedy can lead to success.

When treating the problem, be persistent and ensure you’ve eradicated the colony before stopping. Any survivors can trigger reinfection.

Although you know what kills russet mites, avoid using harsh chemicals except as a last resort. Instead, we recommend natural options as they’re safe for your plants and humans.
Visit Homegrown Cannabis Co. for more growing information and view our extensive collection of quality marijuana seeds to use in your garden.

« What Does a 1 Pound Plant Look Like?
Meet the Expert: Thomas Howard »