Rust Spots On Leaves During Flowering: Causes And Treatments 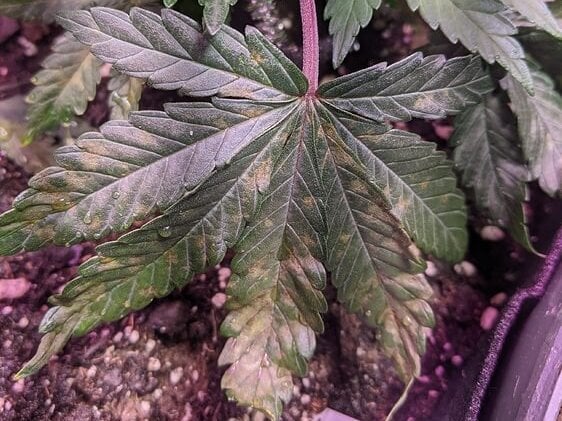 Have you noticed your cannabis plants displaying rust spots on leaves during flowering? While that’s a sign of a problem, don’t worry.

We discuss the issue that gives many marijuana growers a headache to help you understand the symptoms and possible causes.

As early detection and prompt action are essential, learn simple solutions and ways to prevent its spread and recurrence.

Why do my weed plants have rust spots on leaves during flowering?

There are two causes of rust spots on weed leaves:

The fungus creates a rust-colored powdery substance on your plant’s foliage as spores develop. You may notice tiny brown spots or a dark hue at the edge of the leaves.

The problem is potentially severe as the organisms proliferate through air and water. The slightest wind causes them to become airborne and spread to other plants.

The affected leaves can wither and fall off if you don’t treat the infection. While your crop won’t die, the issue may affect bud production.

The cause of rust fungus is infection by a fungal parasite that only attacks plants—Pucciniales, also known as Uredinales. The organism produces brown spots on leaves during flowering and can potentially destroy your harvest.

The difference between Pucciniales and other fungi forms is that the former only strikes living plants and feeds off them. The others can develop and survive on dead matter. While it doesn’t kill your cannabis crops, it causes damage that prevents proper nutrient absorption.

Rust fungus attacks foliage that’s moist for an extended period. It produces fungal spores that can spread to other plant leaves of nearby crops by water and air. This phenomenon explains why you notice more rust spots after watering.

Don’t mistake rust fungus for leaf septoria—another cause of spots on the foliage. That’s a harmful disease resulting from another fungus, Septoria lycopersici.

It’s challenging to tell them apart as both infections display similar symptoms. The key difference is the Pucciniales parasite feeds on living plants while leaf septoria spores continue to thrive on dead matter.

How to determine rust fungus infection

As weed plants display symptoms that indicate several possible causes, it’s essential to identify the problem correctly before treating it.

The following are signs you have rust fungus:

The nature of the symptom depends on the infection’s progress. Orange spots on weed leaves typically appear in the advanced stage.

To differentiate between an infection or nutrient deficiency, rub a bump with your fingers. If the substance comes off, the leaf has a rust fungus problem.

Although, in most cases, the fungus causes the brownish-red bumps on cannabis plant foliage, a lack of nutrients is another possibility. If rust spots on leaves during flowering result from a lack of nourishment, it’s more likely a magnesium deficiency than a calcium one.

There’s a danger that marijuana crops may experience a nutrient shortage throughout their growth, more so during flowering. The risk increases in the bud-producing stage when they need plenty of nutrition.

Plants may not get sufficient magnesium or calcium for two reasons. You’re not feeding them enough, or they’re experiencing nutrient lockout. That occurs when they can’t absorb food from the soil.

Treating the problem immediately is essential, or the rust spots may spread throughout the foliage. The sick and dying leaves can stunt your crop’s growth and bud-production levels.

Before exploring treatment methods, it’s essential to know the signs of a lack of calcium and magnesium. Rusty spots on cannabis leaves are only one of the symptoms.

Symptoms of a magnesium deficiency generally show up 3 to 6 weeks after it starts. The first noticeable sign is interveinal chlorosis—the areas between the veins of older leaves yellowing. Rust spots begin to appear.

The brownish spots increase in number and size as the deficiency progresses through the plant. Besides the interveinal areas, they also develop in the tips and margins of the foliage.

Notice your weed plant appears droopy and sickly as some leaves begin to curl up, die, and fall off. When brown spots on cannabis leaves during flowering increase, the damage can lower bud production.

The symptoms are similar to magnesium deficiency, except when there’s a lack of Mg, the leaves turn yellow, and veins remain green.

How to fix magnesium and calcium deficiency

To nip nutrient deficiency in the bud, be vigilant, so you notice the indications early on. Immediately treating the problem is vital as it can affect your plant’s ability to absorb food.

After identifying rust-colored spots on cannabis leaves due to magnesium and calcium deficiency, provide your cannabis plants with more nutrients. If the condition doesn’t improve, treat your crops for nutrient lockout.

Check the soil pH level as the varying degrees affect the nutrient absorption rate. For cannabis plants, the optimum range is between 6.8 and 7.2. If the pH is outside that scope, crops can’t uptake food even if you give them enough.

If soil pH is ideal, the nutrient lockout might be a result of;

When your plants lock out the two elements, they also prevent the uptake of other nutrients. Fixing the Ca and Mg issue allows your crops to absorb food effectively again.

When you rule out fungus and nutrient lockout as causing rust spots on leaves during flowering, cannabis nutrient burn could be the issue.

This condition refers to your soil having too many nutrients. To reduce the content, flush the medium with tap water.

As depletion can cause your plants to wilt, add some fertilizer. Start with half of the previous amount. Be sure to observe your crops and increase the dosage if necessary.

Causes of rust fungus on cannabis and how to treat it

Rust infections happen when you expose cannabis plants to a moist and damp growing environment. The fungus thrives when temperatures are between 68–86°F, and the leaves are wet. It further proliferates when the weather gets warmer after that.

If your plants are wet during the night and it’s sunny during the day, they’re at a higher risk of rust infection. When using indoor cannabis seeds, don’t overwater them or leave them damp for more than 6 to 10 hours.

While rust fungus on cannabis plants doesn’t kill them, it can harm their growth as the infection progresses. The issue causes the leaves to weaken and turn yellow before finally dropping off.

As your crop needs its foliage for photosynthesis and respiration, losing it reduces its ability to make energy. When this happens, your plant stops developing new leaves to survive, retarding its growth and yields.

Early treatment is critical as the spores can spread quickly and affect other plants in your garden. Although the organic matter is resistant, these techniques help effectively deal with the parasite:

When there’s widespread fungus on a plant’s foliage, you have to get rid of it. Losing one plant is a small price to pay to save the others.

Add a weekly sulfur dusting to your routine to help treat rust fungus on weed plants. If you prefer not to use commercial fungicides, a natural one like neem oil does an excellent job.

Baking soda with light horticultural oil is another excellent alternative. Homemade sprays are ideal as you control the concentration and strength.

How to prevent rust fungus infection

There’s no one-size-fits-all method to cure marijuana plants of the parasite. It’s possible, though, to control and prevent it from spreading to your crops in the growing area.

Follow these tips to minimize the risk of rust spots on cannabis leaves:

Learn more about rust spots on cannabis leaves during flowering from our expert responses to these frequently asked questions.

How to differentiate between brown spots and rust spots

Using your finger to rub the dots on the leaves is a simple test. If they come off, they’re rust spots, and you have a fungus problem. You can’t remove foliage discoloration resulting from nutrient deficiency.

Should I cut off leaves with rust?

Yes. Removing affected leaves stops the infection from spreading to other foliage on the plant. Ensure you dispose of them immediately. Leaving them in the garden increases the risk of spores attacking nearby crops.

If you notice fungal buildup on most leaves, discard the plant. It’s better to give up one than have the fungus proliferating to all your crops.

Do rust spots only appear during the flowering stage?

You may notice rust spots on leaves during veg, but they’re more likely to appear when flowering. Plants need more nutrients at this time, increasing the risk of magnesium and calcium deficiency in weed crops.

The lack of nourishment problem might also occur at other growth stages due to:

While commercial fungicides are readily available, making them is an option. Copper and sulfur solutions are popular, although some rust fungi may be resistant.

Some homemade spray ideas include:

Spots on your foliage may signify an infestation by pests, like spider mites. Generally, rust spots on marijuana leaves are likely the result of an attack by the fungus Pucciniales.

Nutrient deficiency, specifically calcium and magnesium, is another possible cause of infection on your weed leaves.

Control and prevent rust fungus for a bountiful harvest

There’s no reason to worry when you see rust spots on the leaves of weed plants. They may pose a threat to your crops, but the problem is preventable and treatable.

As the parasite doesn’t kill your plants, removing the danger and allowing them to flourish and produce abundant yields is possible. Check out our website for more marijuana cultivation tips and buy quality seeds.