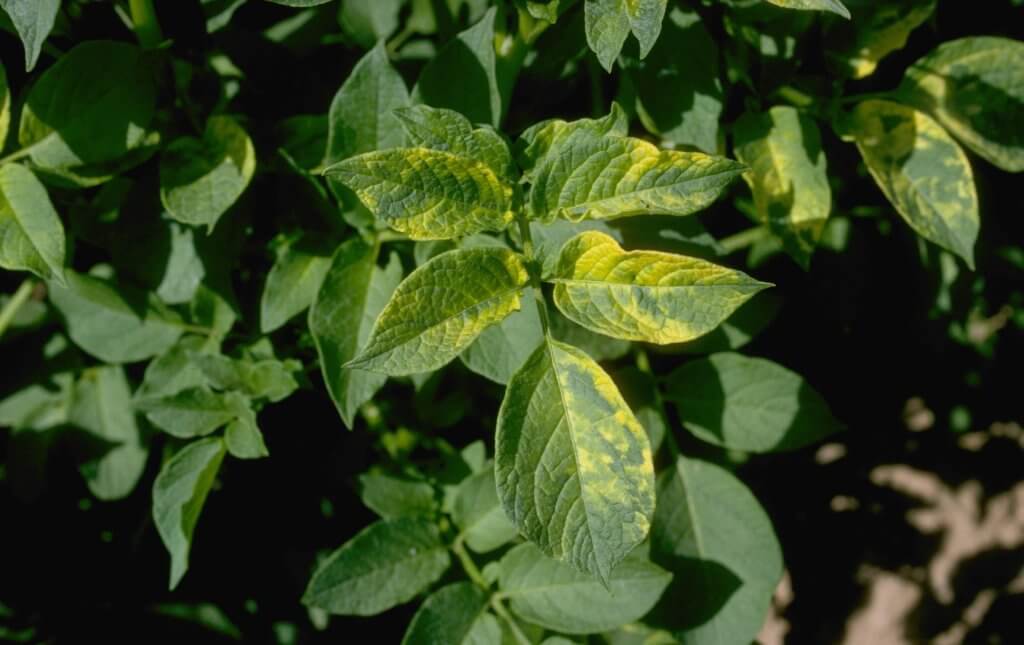 Tobacco mosaic virus (TMV) is a fast-spreading disease famous for destroying entire crops of tobacco hence the name. Although there’s no concrete scientific proof that tobacco mosaic virus in cannabis exists, growers all over the world swear their herbs have fallen victim to this deadly disease.

Besides its rarity, most cultivators don’t have labs to test for cannabis TMV, and when they do, the results often come back as negative. These factors make it almost impossible to determine if the virus has damaged the crop or if it was something else like pests or other diseases.

Tobacco mosaic virus in cannabis is disastrous for your plant’s yield size and can remain a hidden danger in your soil for years. You must recognize the signs of TMV in cannabis so you can act fast to protect your other plants and have a chance at a successful grow next season.

Read on as we explore the truth behind the question: what is tobacco mosaic virus? Below you’ll learn how it occurs, how you can avoid it threatening your weed, and what you need to do when it comes calling.

What is tobacco mosaic virus (TMV)?

Tobacco mosaic virus, also known as tobamovirus or TMV, is a single-strand RNA virus. It enters a plant via its plasmodesmata which are microscopic channels that bind cell walls together. Once it gets inside your weed, its genes replicate to colonize foliage leaving behind a mosaic pattern of discoloration on leaves.

The virus was first identified in 1892 after striking tobacco farms, but it’s now known to infect over 200 other species, including peppers, cucumbers, and reportedly cannabis.

The virus can live dormant in soil, but it typically spreads through direct contact between infected plants and on your hands. Tobacco mosaic virus in cannabis and other plants can’t transmit to humans, and smoking contaminated buds isn’t harmful to health.

What is the survival range of the Tobacco Mosaic Virus?

TMV is a highly resilient virus that can survive in temperatures up to 104°F as long as it has a continuous cycle of host plants to infect. In dried leaves, it can withstand up to 122°F for 30 minutes.

In moist soil, it can persist for over a year and in dry soil even longer. Some report finding TMV even after 24 months since infection.

When cleaning out sick weed plants, be careful where you put them and their potting media. Carelessness may lead to you accidentally spreading the infection further.

The hot and humid conditions necessary in cannabis grow spaces are particularly favorable for tobacco mosaic virus in weed. Indoor and greenhouse-based cultivators need to pay particular attention to their marijuana for any early signs of TMV in cannabis.

How is the tobacco mosaic virus spread?

Tobacco mosaic virus in cannabis can spread in several ways. You must learn how it moves through crops so you can take all the necessary precautions to prevent it from entering your grow room.

What does TMV do to cannabis plants?

Tobacco mosaic virus in weed infects the chloroplasts found in leaves necessary for photosynthesis. Plants use their foliage like solar panels for energy to power growth and a host of other processes vital for health. The obstruction causes a chain reaction of illness.

TMV can be fatal for seedlings and young plants who need all the energy they can get to survive. Mature cannabis with established foliage can typically withstand its onslaught until harvest.

As the virus progresses, it inhibits the vascular system and takes hold of the entire crop, including the roots. As a result, plants suffer from stunted growth, significantly reduced yields, and poor quality buds.

There’s still a lot to learn about tobacco mosaic virus in cannabis. Much research has gone into testing weed plants with clear disease symptoms, but scientists are often left stumped over negative results. There have only been a handful of confirmed samples in weed over the years.

Many cultivators report their crops falling ill and point the finger at tobacco mosaic virus. With this said, cannabis TMV looks very similar to a variety of other common marijuana health problems, including root issues, deficiencies, and pH imbalance. Without access to testing facilities, it’s easy to mistake the symptoms and wrongly diagnose the issue.

Keep your eyes peeled for tobacco mosaic virus symptoms in your cannabis so you can act fast to protect the rest of your crop.

When it strikes, you’ll notice changes to the leaves first, such as:

As the virus progresses, your plants will struggle to develop normally, causing:

It’s worth noting that some plants can act as TMV carriers while not displaying any symptoms. In some cases, signs of the virus remain ‘hidden,’ only coming to light once the plant has undergone another stress, like a deficiency or training.

Particular cultivars are also known to mature with TMV-like characteristics, such as striped leaves and purple stems. For these reasons, you must do adequate research on your strain of choice and monitor each plant for signs of tobacco mosaic virus in cannabis every day.

How to get rid of tobacco mosaic virus in cannabis?

You should treat TMV in cannabis like any other type of crop displaying signs of the disease. Sadly this means disposing of infected plants. Unlike other health complications, there are currently no commercial solutions or DIY remedies suitable for tobacco mosaic virus treatment in cannabis.

Once you spot signs of cannabis TMV, your main goal is to prevent it from spreading throughout your crop. You’ll need to carefully remove sick plants and the media they’re growing in from your growing space.

Remember tobacco mosaic virus in weed can survive for quite some time in decaying leaves and soil. Therefore, your healthy plants mustn’t touch any infected foliage, and you can’t recycle the media later on. You’ll also need to adopt a strict handwashing policy between touching each plant to prevent further cross-contamination.

As TMV in cannabis isn’t fatal for established marijuana, it can be tempting to quarantine the ill plants and allow them to finish their life cycle. While this is a viable option for those with strict hygiene routines, it’s high risk.

As mentioned previously, some research dictates that the smoke from infected buds could spread the disease to other cannabis plants as they ‘breathe’ it in. If you smoke around your crop, you could reintroduce the virus or spread it to other people’s weed as they consume your pot around their own grows.

Tobacco mosaic virus treatment: how to cure your cannabis plants

Unfortunately and frustratingly, there isn’t a known tobacco mosaic virus cure at this time. Identical to viruses in humans, those in plants can’t be removed or controlled once they enter the system.

The only thing you can do is prevent it from spreading. After removing and destroying infected plants, you’ll eventually stamp it out from your grow space.

How do you prevent the tobacco mosaic virus in cannabis plants?

Preventing most cannabis health concerns is relatively simple. Nowadays, there’s a variety of formulas, tools, and products readily available to help you monitor your crop and keep nasty things at bay.

In the case of tobacco mosaic virus in cannabis, no such things exist. You can’t use sticky traps and capture it like you can for many pests. pH and TDS meters are also rendered useless in this situation.

As we now know, TMV can enter your grow space in a variety of ways. To limit the chances of your crop contracting the illness, you need to put in preventative measures surrounding each of these carriers.

Below we revisit the ways TMV in cannabis is spread but focus on reducing the risk of it being carried into your grow space via these vectors.

Turn tobacco mosaic virus away at the door

Tobacco mosaic virus has ravaged farms worldwide for decades, wiping out entire crops of products, including cannabis. Home cultivators won’t have to face the financial blow a loss of this scale creates. Nevertheless, they’re sure to feel the same heartache of lost time and effort.

As marijuana growers, we have a responsibility to monitor and act upon cases of tobacco mosaic virus in weed whether we cultivate three plants or 300. Carelessness can quickly lead to an outbreak, and not only in your facility. It can also spread to other people’s marijuana grows and nearby farmland.

Eradicating tobacco mosaic virus in cannabis can feel like a relentless battle, especially when some plants can be asymptomatic and it can live in soil for years to come. Remember, the key to tackling TMV in cannabis is never to let it get in, to begin with, by adhering to strict hygiene and quarantine rules. If it does sneak by, throw it back out fast by destroying infected plants and soil.

Join the cannabis TMV discussion and share your marijuana-growing experiences on our blog today.

« Is Growing Weed Worth It? Let’s Find Out!
How to Make Cannabis Tincture In 5 Steps »