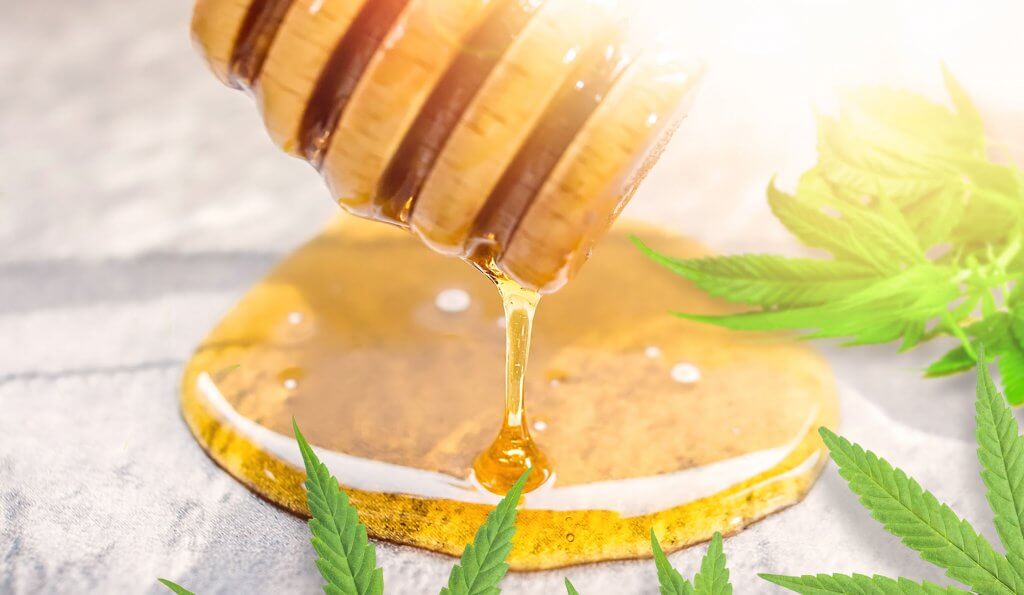 Cannabis? Check! Honey? Got it! Now we can get started on creating delectable cannabis honey.

As simple as the treat sounds, it’s not as straightforward as throwing these two ingredients together. So what does it take to create weed-infused honey that brings 420 enthusiasts and liquid gold lovers together?

If you’re not a prominent sweet nectar user but would love to try out this edible product, we have notes for you too.

Amongst other vital points, we’re here to learn about a cannabis-infused honey recipe.

What is cannabis honey?

It’s not something bees make by collecting nectar from a marijuana flower. It’s simply honey mixed with cannabis.

Canna-honey is a fusion of nature’s most splendid and therapeutic gifts. The golden goodness—a natural by-product of flower nectar and the upper-airway tracts of honey bees—and a selected weed cultivar.

It involves activating the cannabis plant’s lucrative compounds, heating them by decarboxylation, and adding sweet nectar from bees.

How cannabis honey will affect you depends on the weed strain you use during infusion.

What can you use marijuana honey for?

You can use marijuana honey for a variety of things. Limiting it to edibles is doing it an injustice.

Suppose you opt for a less psychoactive cultivar to add to your cannabis-infused honey. In that case, you can make edibles to consume throughout the day.

You can also replace your sugar intake and usage with weed honey. From baked goods like muffins, cookies, or even chocolate—if you feel up to it—to a delightful afternoon cup of tea. It doesn’t just need to be an additive to your food or drinks.

People may find it beneficial to use topically for ailments such as:

You may also use cannabis honey for:

Thanks to the profound properties that this sweet nectar and marijuana hold, cannabis honey is beneficial to your health and cerebral effects in various ways.

In their respective forms, they have a multitude of possible health advantages. Combining the two into cannabis honey enhances these benefits and creates one magnificent product.

Let’s touch on some benefits of each:

While we’re on the topic of cannabis-infused honey, it’s good to know the difference between the irradiated and non-irradiated kind.

When irradiating honey, it undergoes a process that eliminates unwanted microorganisms, pathogens, and insects. At the same time, it kills off friendly enzymes, and it loses its natural healing abilities.

Based on the import laws in various countries, honey brought into a country needs to be irradiated. It’s to protect local bee colonies and raw honey production sites. Isn’t that great? It shows how important bees are to humans. Besides the sweet nectar we need for our marijuana-infused honey, bees play a vital role in keeping our pollination schedules in check.

Irradiated honey isn’t the kind you generally want to use for this confection since it’s lost all its natural elements.

Like regular marijuana seeds, this kind is in its purest form. Sweet nectar jars labeled with non-irradiated is the one you would rather use for your canna-honey. It’s a good idea to source this from local suppliers.

In addition to the euphoria that marijuana provides, it boasts many other benefits when used correctly. Cannabinoids like THC and CBD are responsible for the advantages linked to these crops.

Combining these elements into a jar of greatness called canna-honey can only be good for you.

Some people are serious about their intake of marijuana but—believe it or not—may not be too keen on smoking. Using weed-infused honey is another enjoyable way to get their daily dose of cannabis.

Humans have consumed this nectar for centuries, and it’s had a valuable place in traditional medicines ever since. According to history, Ancient Egyptians also used the sweet liquid to treat health issues.

One of the many properties of honey is that it’s antibacterial. It destroys harmful bacteria and fungi in or on the body. Predominantly the effect you feel from your weed-infused edible depends on the potency of the cultivar you add.

What effects do you expect from your canna-honey?

A marijuana strain with more THC will have a stronger psychoactive effect when indulging cannabis-infused honey.

THC is the compound in cannabis that activates the psychedelic feeling. White Rhino feminized, for example, contains up to 26% THC, whereas Harlequin Kush has far less at 7%.

Do you want your weed honey for medicinal use?

To use your weed honey for medicinal purposes, go for a cultivar that contains more CBD than THC. Carmen 2.0 feminized, for instance, contains CBD of up to 20%. You don’t feel a change in your senses, but you still gain all the benefits.

How to make cannabis honey

This sweet confection can be a sugar substitute in most dishes. The number of edibles you can make with weed honey in your pantry is limitless. A crucial first step prior to getting started with the recipe is to decarboxylate your cannabis.

Decarboxylation of your weed is vital for the marijuana honey recipe. It’s a chemical process that cannabis needs to activate the compounds like THC and CBD.

The process involves the application of heat to the weed for some time. Consuming raw cannabis won’t affect you, but heating the marijuana before the infusion enhances the properties in your weed-infused honey.

With the cannabis industry continuously growing, there are various appliances available that make decarboxylation an effortless process.

For those who don’t own one of those wonderful gadgets yet, here are ways to decarboxylate at home:

The easiest and most convenient method among the three would be using your oven.

It’s vital to keep the temperature of your oven between 200–300°F at all times during baking.

Finally! The process is quite simple but takes a bit of time to see your result.

There you have it, your very own marijuana honey recipe. Add it to your beverages, mix it in with your baking, and glaze your favorite foods with it. Get creative! Be inspired!

Will making your cannabis-infused honey smell? It all depends on what odor you’re referring to.

There’ll be little to no smell while making your canna honey. The process of decarboxylating your weed creates a mild aroma due to the heating.

You may not get the intense smell of weed while making your marijuana-infused honey, but you can get subtle scents from the strains’ terpenes when using it. When cooking honey and marijuana over low heat, the terpenes and cannabinoids separate from the plant material, but the oils remain in the nectar.

These terpenes hold the flavors, aromas, and medicinal properties of the bud. When you add some weed honey to your next beverage, you may detect hints of these scents.

How strong will my cannabis-infused honey be?

The strength of your cannabis-infused honey depends on the amount of weed used and the potency of the strain.

If it’s your first time probing into the marijuana edibles section of home-baked goods, consider starting with small doses. An appropriate starting quantity is about ½ teaspoon at a time.

Keep in mind that you won’t instantaneously feel the buzz if that’s the effect you’re after. It takes a while for the sensations from canna-honey tea to hit.

Inhaling cannabis and ingesting it via edibles have different effects on the body.

Tip number one: have fun while making and enjoy your canna-honey! Here are two more informative ones to add to your notes:

Canna-honey! Sweet euphoria in a jar

No bittersweet feelings here! Just the blissful effects and tastes from your cannabis honey. The fusion of the two is one to top your recipe book favorites.

The sweetness from the honey and the euphoria from the marijuana leaves you with a delightful jar of canna-honey.

Now that you know how to make weed honey, what effects it gives you, and that it won’t smoke up a sweet weed storm in your house, it’s time to start filling those jars.

Remember to be mindful about your usage each time. A teaspoon a day keeps the ailments at bay.

Not sure what cultivar to add to your marijuana honey recipe? Browse through the seed store at Homegrown Cannabis Co. and find the one that hits your buzz.

« Cream Caramel Strain Information & Review
Autoflower vs. Feminized vs. Regular Seeds: What Is The Difference? »